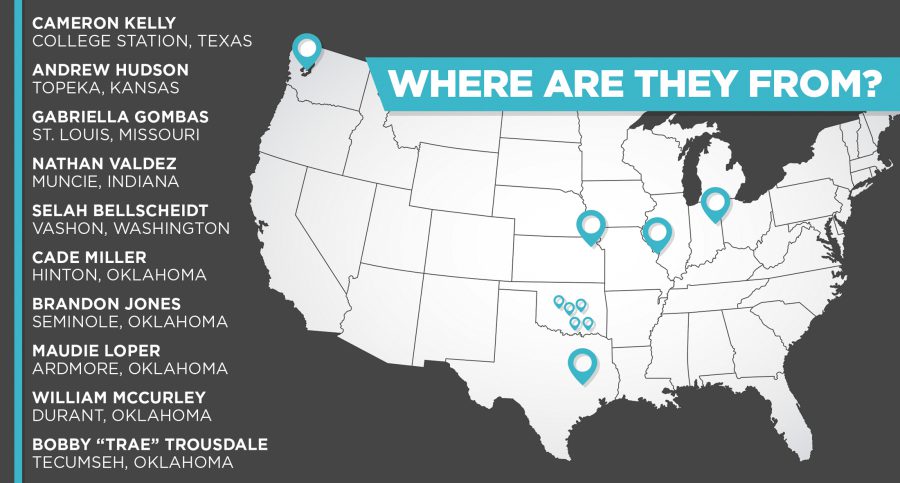 “We can always hire specialists and the right technical staff,” said CPN Tribal Chairman John “Rocky” Barrett. “We can’t hire leaders. Our leaders come from our youth, and it is our responsibility to prepare them.”

The program provides students opportunities to develop their talents and interests while gaining important life skills. It also provides a foundation for not only their careers but also their potential involvement within the Nation.

This year’s 10 participants are 18 and 19-years-old and will travel more than 4,300 miles combined from six states.

“A leader is someone who can take the initiative to get done what needs to get done,” said 2018 PLP member Andrew Hudson.

Hudson is a sophomore at Kansas State University in Topeka, Kansas, where he studies industrial engineering. This summer, he intends to learn how to be an engaged citizen.

“I have a natural ability to analyze processes,” Hudson said. “My hope is that with my natural ability and my education, I can put my analytical skills to work for the Tribe.”

Cameron Kelly, a sophomore at Texas A&M University in College Station, Texas, looks forward to developing relations with the Nation and gaining more knowledge about her Native heritage.

“I would love for my role as a young servant leader to be connecting those young Tribal members around the Nation so that we can all move to inspire, motivate and educate those who may not be involved in community culture,” Kelly said. “I know that given the opportunity, and given the education, young Tribal members will want to become more and more involved in connecting with other young members and figuring out how they can apply their talents and skills to lead our community.”

Gabriella Gombas, from St. Louis, Missouri, will attend the University of Kansas this fall. She is majoring in psychology, and upon receiving her bachelor’s degree, she plans to attend medical school or become a psychiatrist.

“I am hoping to gain a new understanding of my people and culture by participating in the Potawatomi Leadership Program,” Gombas said. “I strive to use this education to aid my passion for psychology. By learning about leadership, culture and community in my Tribe, I can better study Native American mental health.”

Sophomore Nathan Valdez attends Ball State University in Muncie, Indiana, where he studies architecture and anthropology. He hopes to build long-lasting relationships with other CPN members and to use what he learns to benefit the Nation as a whole.

“Having the opportunity to be involved in the program excites me because it will allow me to expand my idea of culture and my knowledge of a totally different lifestyle,” Valdez said.

Selah Bellscheidt is a sophomore attending Western Washington University. She will travel the farthest out of all those selected. Her home in Vashon, Washington, is more than 2,000 miles away from CPN headquarters in Oklahoma.

“In my experience, leaders are those who make others feel like their voices and ideas are being heard and acknowledged,” Bellscheidt said. “My hope in participating in the Potawatomi Leadership Program is to discover more ways that I can benefit the Tribe and participate in Tribal activities.”

Sophomore Cade Miller from Hinton, Oklahoma, is studying agriculture at Oklahoma State University. He is thankful and proud for the opportunities CPN provides for members.

“I want to make an impact for the Tribe,” Miller said. “My goal is to become elected as a Tribe official.”

Even if he isn’t voted into office, Miller hopes his interest in all levels of government will help him develop a career as a lobbyist.

“I want to do it because I’ve seen how hard the people before me have worked, and I want to give the future kids the same chance that I have.”

Brandon Jones is a freshman from Seminole, Oklahoma, studying at Seminole State College. He believes success stems from hard work and that a true leader follows the rules, even when no one is looking.

“Having the Tribe as a part of my life is something I want forever,” Jones said. “My great-great-grandfather signed treaties as a leader in the Potawatomi tribe. I would like to follow in his footsteps and take an active leadership role in my Tribe.”

Maudie Loper from Ardmore, Oklahoma, will attend Fort Lewis College in Durango, Colorado, as a freshman this fall. She looks forward to gaining knowledge and finding new ways to be an involved citizen through PLP.

“I plan to be an active member in any and all Native American programs that Fort Lewis has to offer as well as keeping up and being active with Tribal affairs at home,” she said.

Once obtaining her bachelor’s degree, Loper plans to move to the Oklahoma City or Shawnee area to combat cancer or diabetes within the Tribe through genetic research.

“When I become a parent, (living near CPN) can allow my children to be as exposed to the culture of the Tribe as much as possible,” Loper said.

William McCurley graduated from Cyril High School in 2017. He is a sophomore studying music at Southeastern Oklahoma State University in Durant, Oklahoma. He hopes to build a career as a teacher.

“After being a part of the program, I hope to be informed of what is going on within the Tribe,” McCurley said. “I hope to attend more Tribal events, especially the annual Festival, which I have not been able to attend for around 10 years.”

Bobby “Trae” Trousdale, a sophomore from Tecumseh, Oklahoma, studies economics and finance at Oklahoma City University. Upon graduation, he hopes to attend the University of Tulsa to pursue a Master of Business Administration.

“Eventually, I hope to serve as a Tribal leader in either the executive or legislative branch and be an elected state official that represents the area where CPN jurisdiction lies,” Trousdale said. “The possibility to be in the PLP excites me because it is a starting point for the path I have planned out. The opportunity to meet future Tribal leaders, observe and analyze career paths throughout various departments, and develop a deeper understanding of the Potawatomi Nation and its constituents have ignited a fire of desire within me.”