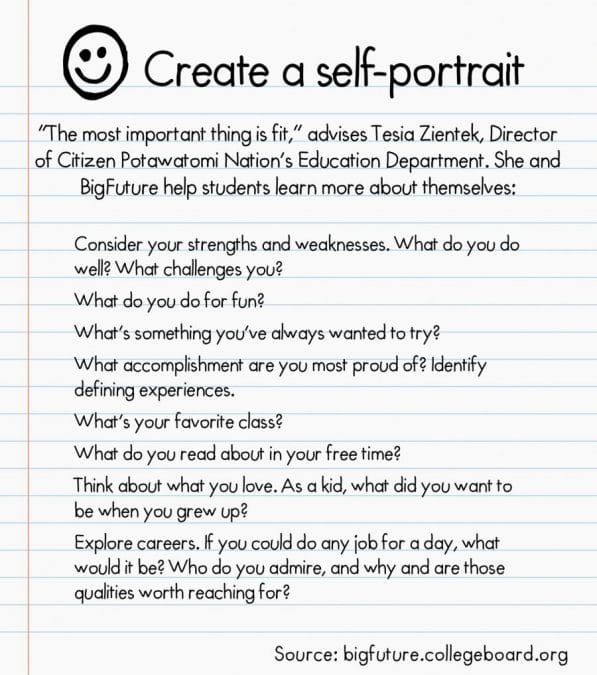 None of it is particularly relevant in determining a student’s potential for educational success.

“I think a lot of times we get into the trap of thinking, ‘Wow, I hope this school accepts me,’ or ‘I hope I’m good enough for this school,’ but schools are nothing without the students,” said Tesia Zientek, Director of Citizen Potawatomi Nation’s Education Department.

“I remind students they need to forget all of that conventional generalities — ‘This is the best for all Native Americans,’ or ‘The best all-around’ — because that’s just not true,” she said. “Harvard may be great for some, but it’s not if it does not offer what you want.”

The best education is the one that’s right for each student’s needs.

A friend and Notre Dame alumni told Zientek to flip the famous John F. Kennedy line: “Ask not what your college can do for you — ask what you can do for that college.” It is a phrase she often uses when counseling clients. “Students are really empowered to pick their schools.”

CPN’s tribal scholarship program provides $2,000 for full-time and $750 for part-time students per semester, up to three times a year, regardless of age or location. The department administers them to traditional and nontraditional students attending two- and four-year universities and community colleges.

“You can get all three for taking classes all three semesters — spring, summer, fall,” Zientek said. “Our scholarship is for anybody who is receiving an associate degree or beyond.”

It’s a complicated process, to be sure.

“Sometimes, for students, it can be intimidating,” she said. “Our advisers help connect students to other Native American scholarship opportunities, too. I tell them, ‘Let me find out more about you because there’s a scholarship for almost everything.’ That can be really awesome, but it can be really overwhelming.”

CPN’s college advisers and their clients communicate regularly. As frequently as the student feels comfortable or when there is a question or concern. She compared an important part of the decision process to what couples do in the House Hunters reality TV show as they look for a new home.

“People go through and they make their list of must-haves — two bathrooms, price range, all of that,” she said. “Every school on your list should hit all or most of those must-haves.”

A favorite virtual tool is BigFuture, powered by the College Board. Formerly known as the College Entrance Examination Board, the nonprofit preps and administers standardized admission and placement tests.

“You consider, ‘Well, I want to live on campus, I want this major, I like these schools,’” Zientek said. “Native American studies are great, campus clubs, events — if you’re interested in those things, that’s great. If you’re not, that’s OK, too.

“As we start the process, we hear ‘This is the best school for this major’ or ‘I would go to an Ivy League school because I hear they’re the best,’” she said. “But there are so many more factors to consider. Sometimes students are surprised to learn their ‘dream school’ isn’t on the list of colleges that might be best for them.”

It’s often a pleasant surprise, and then it’s a relief, Zientek said.

“What’s important is that you pick the school for you,” she said. “You’re going to be a Potawatomi citizen wherever you go.”

CPN’s Department of Education also helps many nontraditional students — those who graduate in more than four to five years, begin later in life or return to update their education.

Founded in October 2016, CPN’s Education Department consolidated multiple Tribal scholarships into one program, streamlining administration and making data collection more consistent and efficient. Since it is still relatively new, Zientek said it is still a little too early to track long-term graduation rates, in part because the Tribe serves many nontraditional students.

“We’re definitely interested in finding out how our students stack up against other Native Americans,” she said. “What I have seen, though, at least for the broader area in Oklahoma and looking at some Native American student data overall, Native Americans are going to college.

“What’s interesting is that there’s a misconception that Native Americans aren’t getting into college at all. That’s not what the data show. It’s more that they’re going and maybe not graduating in the traditional four- or five-year period.”

Zientek also said, many Native Americans are not “persisting,” meaning they graduate at a lower rate than other ethnicities.

The department worked with youths at four high schools to help determine obstacles and found that, too often, pre-college guidance resources are spread too thin or nonexistent.

“We picked the four schools that we did because either they didn’t have college counselors, or the ones they did have were split between two or more schools and obviously had a lot on their plate,” she said. “What it means is that students aren’t getting that preparation.

“Also, we hypothesize that they’re not picking the colleges that are a good fit for them — we find that we always go back to that,” she said. “Unfortunately, you can get into a university and not really understand what the expectations are going to be. They don’t fully understand all of the pieces that go into college prep — at no fault to the students.”