It looks like Punxsutawney Phil nailed it again with his forecast of another six weeks of winter. Certainly here in the Golden State, anyway. Below-normal temperatures have created cause for concern to many of our crops here in the Central Valley and elsewhere throughout the state.

The citrus industry is facing an adverse impact on next year’s crop due to the hard, late-season frost impacting blossoms that produce next year’s fruit. The good news is that much-needed precipitation has helped reduce the rainfall deficit we find ourselves in.

What a stark contrast to where we were this time last year with record snow and rainfall. Unfortunately, too much of the overabundance we enjoyed last year was wasted due to our state’s lack of adequate water storage and its aging water storage and delivery infrastructure.

Periods of drought are nothing new to our state. Ever-increasing demands for water are nothing new, either. Unfortunately, our growing population is outpacing even the most valiant conservation efforts. It seems to me that common sense would tell our lawmakers that without the storage capacity to meet increasing demand, we will eventually face a water shortage crisis like the state has never seen.

At some point, our elected officials must put politics aside and do what is right for the citizens of our state. Politicians demonizing certain industries, particularly our farmers, and using them as scapegoats for state governments’ failing water policies should be alarming to everyone.

As of this writing, we are about a week away from our San Diego, California, gathering. I look forward to seeing those attending, and I will be reporting next month for those unable to attend. 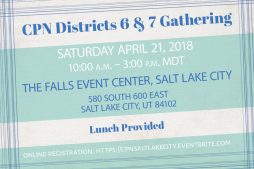 Then we have our joint districts 6 and 7 gathering April 21 in Salt Lake City. I’m looking forward to meeting many new folks from the great state of Utah. It will be a lot of fun for everyone.

Please consider this a personal invite, and if you haven’t already done so, please plan on attending. Registration is simple. If you can do Facebook, you can register on Eventbrite. Mark and I both want to do our best in welcoming all our Utah Tribal members and their families to Districts 6 and 7. We hope to see you there.

Please don’t forget: Family Reunion Festival, happening the last Saturday in June, is rapidly approaching. If you’re contemplating going, I encourage you to start making travel arrangements now. Everyone at Tribal headquarters works hard planning and putting on the most enjoyable event you can imagine.

If you’ve never been, you will be amazed at how inviting everyone is, the spectrum of activities for all ages, and our rich culture and heritage on display for all to enjoy. I guarantee you will leave with a heart filled with pride and joy and a much stronger connection with your Potawatomi roots.

I also want to mention this year’s Gathering of Potawatomi Nations. I think it’s significant this year because it’s being hosted by Prairie Band Potawatomi Nation in Kansas. After the forced removal of our ancestors from our homelands around the Great Lakes region, Kansas was an important part of our history and our journey that eventually led to Oklahoma.

If you are like me, you may not know much about your Potawatomi ancestry before settling in Oklahoma. My great-grandfather John Tescier was born in Wamego, Kansas, just 40 miles from the Prairie Band Potawatomi Indian Reservation and a short 14 miles from the city of St. Marys. However, I don’t know anything about his time in there, only after his arrival in Oklahoma. I’m excited about spending some time in the area, as I have never had the opportunity before this point.

CPN Representative Jon Boursaw doesn’t know it yet, but I’m going to attempt to tap into his vast knowledge of the area and its rich Potawatomi history. I think it will be quite an adventure and a Gathering of Potawatomi Nations like none other. I hope you might also find Kansas intriguing and consider attending. It starts with the July 30 language conference and ends with the Aug. 4 powwow and hand-off ceremony.

This year marks five years since the last Trail of Death Caravan. Every five years starting the third week of September, the Potawatomi Trail of Death Commemorative Caravan embarks on a 660-mile journey from just south of Plymouth, Indiana, to St. Philippine Duchesne Memorial Park near Mound City, Kansas. The caravan is immediately preceded by the annual Trail of Courage Living History Festival at the Fulton County Historical Society grounds in Rochester, Indiana. The Festival is Sept. 15-16, with the caravan leaving Indiana Sept. 17 and arriving in Kansas Sept. 22.

I was contacted recently by Fulton County historian Shirley Willard, who is also the treasurer and publisher for the Fulton County Historical Society in Rochester, Indiana. Shirley noticed that, in my February Hownikan column, I had little knowledge of my Potawatomi family history prior to Oklahoma. She was specifically interested in whether I had ancestors on the Trail of Death. Sadly, my reply was “I don’t know.” She said that each year as part of the annual Trail of Courage Living History Festival, a different Potawatomi family that had an ancestor(s) on the Trail of Death or signed any of the Whiskey Treaties in Indiana is honored as part of the festival.

This year, the honored Potawatomi is Gary Wis-Ki-Ge-Amatyuk (Prairie Band Potawatomi Nation). Gary will be honored with a key to the city by the mayor of Rochester and honored at the Indian dances during the festival. Shirley is looking for Potawatomi tribal members who have ancestors that were on the Trail of Death and who might be interested in being honored at an upcoming Trail of Courage Living History Festival.

I encourage you to visit potawatomi-tda.org for more information and how to get in touch with Shirley. President George Godfrey, Vice-President Robert Pearl, Secretary Tracy Locke and researcher Susan Campbell are all officers for the Potawatomi Trail of Death Association and CPN tribal members. Board member Don Perrot is a Prairie Band Potawatomi Nation tribal member.

During a ceremony at last year’s Family Reunion Festival, the street to CPN’s Cultural Heritage Center was named in honor of Mr. Perrot for his dedication to keeping Potawatomi culture alive.

You can also contact me for more information, and I will do my best to help any way I can.

As always, it is my privilege and honor to serve as your legislator. Thank you for the opportunity and for your support.

Wisdom from the Word: “A man’s courage can sustain his broken body, but when courage dies, what hope is left?” Proverbs 20:1