Each year, Citizen Potawatomi Nation holds elections for seats in the tribal legislature. Legislative terms are staggered, meaning a certain number of seats are always on the ballot. This method means a wholesale turnover of representatives is impossible and keeps continuity and institutional knowledge in the elected government body.

District 7 Legislator Mark Johnson has drawn an opponent. Tribal member Browning Neddeau is running to represent the northern portions of California, Nevada and Utah. The Hownikan spoke with both candidates about why they are seeking the District 7 legislative seat.

Residence: I live outside of Prather, California, which is in the foothills just east of Fresno, with my wife, Rita.

Employment: I just started my 38th year in the Fire Service, currently serving as Unit Chief for the Fresno-Kings Unit of CAL FIRE and Chief of the Fresno County Fire Protection District. I am proud to have a career in public service. The experience I have gained over the years allows me to better serve the needs and to problem-solve for the members in District 7. 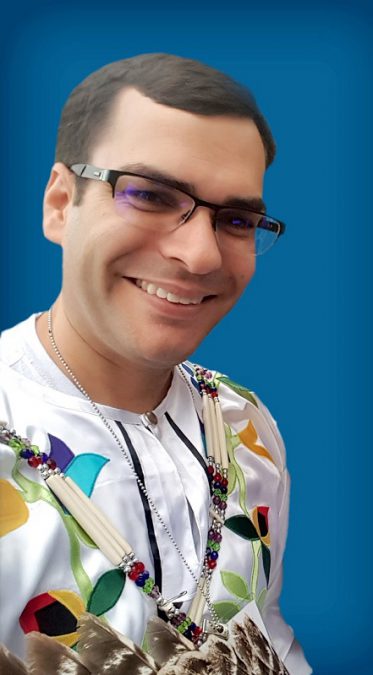 Master of Arts in teaching, University of San Francisco. Thesis title: The impact of classroom music on vocabulary development.

Why did you decide to run for office?

Mark Johnson: I was blessed to be born into a family that taught that service to others was an important part of being a member of a community. I was also blessed to be born a member of our great Citizen Potawatomi Nation. Being able to serve our tribe as an elected member of the legislature is a natural extension of my fire service career — it allows me to give back in a way that honors my heritage and protects the future of our tribe. It also allows me to share our culture and heritage with those I serve.

Browning Neddeau: My decision to run for the District 7 legislative seat grew out of an interest to see an increase in District 7 activities and to honor our ancestors. Creating a sense of belonging for tribal members and their families and offering space for us to learn and grow from each other also influenced my decision. Community has inspired the work of my family for generations. My paternal grandfather Leroy B. Neddeau, along with A.B. Pecore and the Shawnee Inter-Tribal Gourd Clan hosted our tribe’s powwow back in 1974. Today, I organize and participate in Native American activities throughout District 7 and beyond.

If elected, is there anything, in particular, you want to focus on during your term?

Mark Johnson: I was honored and humbled to first be elected in 2010, and then re-elected in 2014 to represent and serve our members as the District 7 legislative representative. I am running for re-election this year to continue the good work we have done as a legislature on behalf of the members, including protecting and growing the financial base of the Nation and protecting the benefits that so many of our members depend on. We also expanded benefits such as the Health Aid program when it made fiscal sense and moved the educational financial aid under the Department of Education while streamlining the program through an online application, which makes it much easier for members to access, apply and track their financial aid.

If re-elected, I would like to work with the tribal executive staff and legislature to form a financial assistance fund to help tribal members who have suffered through a natural disaster. From fire, flood or hurricane, I believe the opportunity exists for the Tribe to help bridge the gap in state and local assistance programs.

What are you most proud of accomplishing?

Mark Johnson: It would be very difficult to narrow it down to just one thing. Certainly, the establishment of the Eagle Aviary and the Department of Education rank way up there, but also the protection of tribal sovereignty from the state and local governments that wish to infringe on those rights is very important. If they were ever successful, it would impact the ability of the Tribe to provide benefits to the members beyond what words can describe.

Browning Neddeau: I must first acknowledge my family, friends, mentors, community members and Tribe that provide me the support to achieve success. It is a privilege to be in the company of great minds and hearts that continue to inspire my purpose in life. At this point in my life, I am most proud of earning my doctorate of education (Ed.D.) degree in learning and instruction. According to the National Center for Education, 177,580 people earned a doctoral degree the year I graduated and only 861 of these graduates identified as Native American. Thus, I recognize my degree as a privilege that affords me opportunity to serve my community and profession as a Native American scholar and advocate.

How have you engaged citizens in your area? How will you continue to do that?

Mark Johnson: I have had district meetings in the traditional sense like the joint gathering I held with Representative Rande Payne over two days last fall. The meeting was successful and enjoyed by everyone who attended. My favorite way is working with our members one-on-one. I spend a good deal of time trying to problem-solve for our members and help them tap into resources and programs both within and outside of the tribe.

In much the same way, our members care a great deal about our collective tribal history and their family history. I have made it a point to provide meaningful guidance to members who wish to learn more about their heritage, along with serious matters like namings and fun things like making regalia. Being able to watch those members connect with their heritage and family history, many for the first time, is very rewarding.

Browning Neddeau: I am very active in Native American community activities at the local, state and national levels. More information about how I have engaged citizens in my area and how I will continue to do so can be found on my website under the Community Involvement section at browningneddeaucpnd7.com/community-involvement or on my campaign Facebook page at “Browning Neddeau for CPN District 7 Legislator.”

My engagement at the local level includes:

My engagement at the state level includes:

My engagement at the national level includes:

Community is very important to me. I am eager to collaborate with our tribal members as we celebrate our tribe’s rich culture and traditions as a community. It would be an honor to serve you as we build community and develop a collective voice in District 7.

What do you believe makes you the best candidate?

Mark Johnson: That is a difficult question. I have never been one who has sought out the spotlight or held myself as being better than the next person, but I have a deep understanding of who I am and why I was placed on this earth. I have always placed others before myself and have been blessed to have a 38-year career as a professional firefighter, currently holding the rank of Chief. I can tell you that when you need help, you will find nobody that will work longer or fight harder for you or to find the answers that you are looking for. I believe that having been in public service for all those years that I have the skill set needed to navigate the system. I was also raised in the culture, so my roots run very deep there too. I believe that I am just a very well-rounded person who can get the job done on your behalf.

Browning Neddeau: My experiences working with Native American community members throughout the United States, especially in District 7, linked with my record of accomplishment of leadership and engagement in the community makes me the best candidate. I believe the best candidate is one that is actively involved in Native American efforts throughout the district and the larger community. I also believe that in order to be a successful leader, one must first listen. Thus, as your District 7 Legislator, I would welcome suggestions from tribal members as I lead strategic efforts to better serve our district and the entire Tribe. I have experience in leading a Native American community group as well as expertise in program evaluation and community organizing. As we move forward as a Tribe, I believe my experiences and skills would serve our district and tribe well.

Mark Johnson: My great-great-grandfather was Louis Vieux. In his day, he was asked to represent the Tribe in dealing with the federal government in Washington D.C. He did so, and every generation of my family tree since has had an impact on shaping our tribal heritage and culture. I am humbled and honored to be your twice-elected tribal legislator, and I would be honored to serve you into the future as we fight the good fight and protect those things that make us the greatest Native American Nation in the United States, the Citizen Potawatomi Nation.

Chi migwetch for your consideration as the District 7 Legislator.