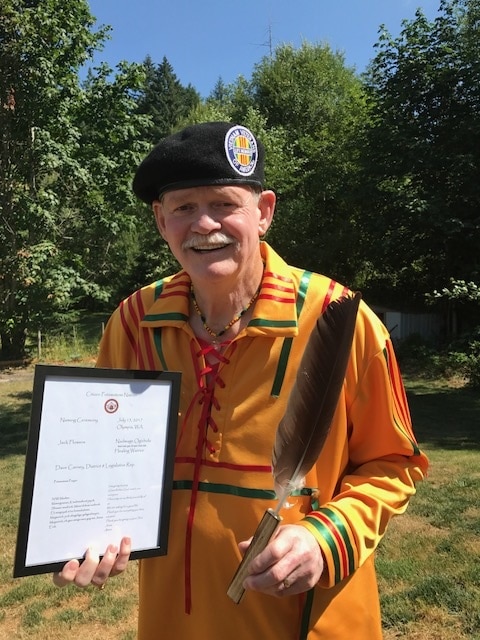 In mid–July, I hosted a gathering of Potawatomi at my home. I had recently constructed a “gazebo” of sorts — really a basic roof over a fire pit at the rear of my yard. It is often a challenge to find a location for a naming ceremony, so I was interested to see how this new structure would accommodate nine members and their guests. It was cozy, but did the job.

It was a great gathering with a very good mix of founding families and members from age 11 to those in their 70s. The number of participants and the spirit of the group was perfect! After the naming, a true feast was had with everyone bringing enough to share — and mostly healthy options, with a side of bacon, of course.

One of the members who started the plan to gather these good people together was Jack Flowers, a Vietnam veteran from Roseburg, Oregon. Like many members, Jack has deep ties to family in Oklahoma. His grandmother came from Kansas to Oklahoma in a covered wagon. Jack has had many health challenges including post-traumatic stress disorder (PTSD), sleep apnea and back issues, among others. He is a cancer survivor. Jack has also fought alcohol dependence and hepatitis C.

One of Jack’s major passions has been traveling around speaking to veteran’s groups about hep-C. Currently, 180,000 veterans are diagnosed with the disease. Veterans have roughly double the risk of contracting hep-C than the general public. Jack served in the Army Transportation Corps from 1967 to 1970, including a tour in Vietnam from 1968 to 1969. It was there that he had exposure to injured personnel without protective gear and he believes this is where he first contracted the disease.

When he was first diagnosed with hep-C in 1995, he was treated with interferon, which made him extremely ill. After struggling for years, Jack was put on a newly FDA-approved treatment called Sovaldi, through the Roseburg Veterans Administration. Within five weeks, he was virus free with few side effects from the new treatment. He speaks to veteran groups about his own experience and about veterans talking up and advocating for their own health care.

Jack is the treasurer of Chapter 805 of the Vietnam Veterans of America. This group recently raised $22,000 through patriotic calendar sales to erect a bronze statue — the Fallen Soldier Battle Cross at the Roseburg National Cemetery Annex in Oregon. It depicts a set of boots with a rifle and bayonet set between them and a helmet on top of the gun.

I’d like to thank Jack for his past and ongoing service to our country and his fellow veterans.

On a different note, I am currently planning the Fall Feast for November, which should be in Seattle this year. Stay tuned for details. I believe it will be in the Duwamish Longhouse again. The date is Nov. 11, which is also Veterans Day.

As always, it is my pleasure serving as your legislator,