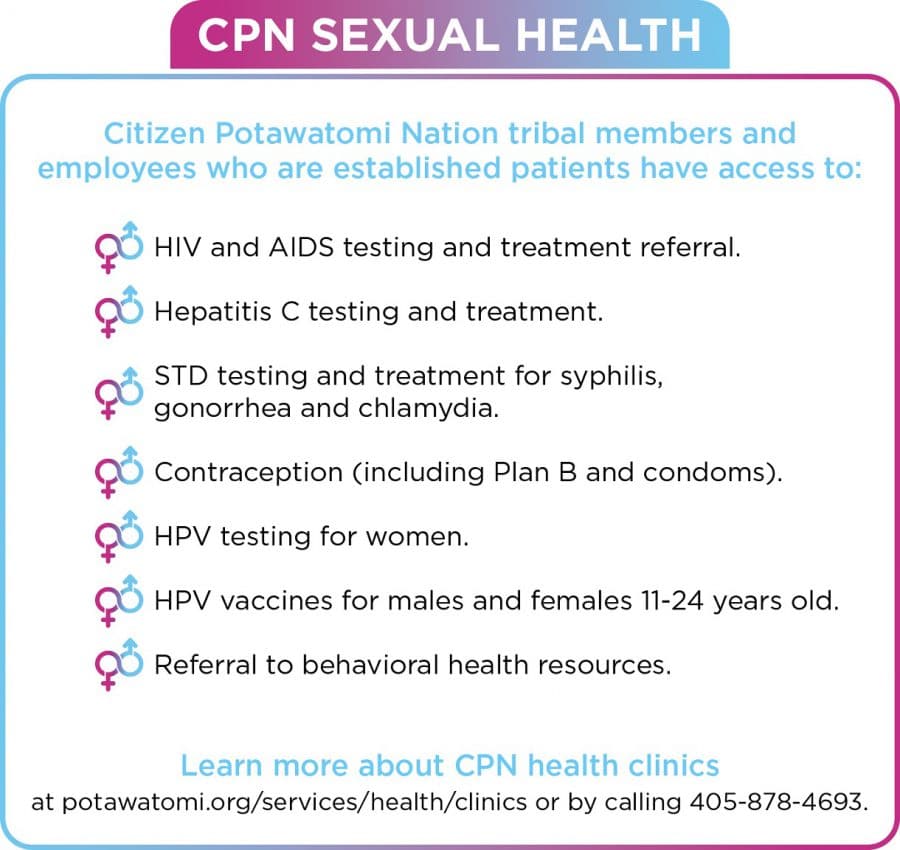 At first glance, the numbers are somewhat startling: In the last three years, diagnoses of hepatitis C, HIV and AIDS among Citizen Potawatomi Nation clinic patients have increased.

“We do a huge number of tests,” said Dr. Kassi Roselius. When she started working with CPN Health Services almost two years ago, “we started screening every baby boomer.”

The U.S. Centers for Disease Control and Prevention recommends the one-time hepatitis C test, saying nearly one in 30 people born between 1945 and 1965 have the virus. Most don’t know it until it’s too late. The virus causes liver disease, including cancer, and is the leading reason for liver transplants in America.

Similarly, the CDC updated its HIV and AIDS screening recommendations in 2015, and again in 2017. CPN clinics display signs in every appointment room to promote testing.

“Just having that national recommendation opens up people’s awareness,” Roselius told the Hownikan. “It’s not such a taboo topic, and so they are willing to come and get the screening.”

“You know, people ask me about it now when they come in for a flu shot,” CPN Health Department public health nurse Lisa Vernon said of the screenings, which are free for established clinic patients.

Clinic staff screens patients for sexually transmitted diseases and infections (STDs and STIs) during pelvic exams or at any time by request.

For women, a Pap smear can test for trichomoniasis, gonorrhea and chlamydia. Syphilis, hepatitis C and HIV screens require blood samples, which means a trip to the lab. CPN offers those services a few doors down from exam rooms. Patients receive results within a few days.

Men generally don’t seek testing or treatment unless they are experiencing symptoms or are sick, especially if they’re younger than 35, Vernon said. As a result, men receive screenings at significantly lower rates than women. A urine sample is often an adequate means of determining infectious status for quite a few diseases for both men and women.

The clinic also offers Plan B, birth control and condoms to established patients at no cost. Many county and state health department offices provide free condoms to the public, no questions asked.

Education, awareness, ease of access and cost all contribute to the clinic’s increased testing numbers and the destigmatization of treatment.

Usually, a simple shot and/or prescription medication available at the clinic quickly clears chlamydia, syphilis and gonorrhea. That’s why it’s so important to diagnose and treat them before they cause reproductive complications such as infertility, chronic pelvic pain and nervous system and organ damage.

Similarly, a hepatitis C  diagnosis usually means a round of antiviral medication.

If treatment isn’t available in-house, a doctor or nurse connects patients to county or state health clinics, specialists and other appropriate resources.

“If you have HIV or AIDS, obviously if it’s a brand-new diagnosis, that’s a sit-down, one-on-one conversation trying to help them,” Roselius said. “We would usually try to set them up with an infectious disease specialist if needed, so lots of referrals to specialists; sometimes behavioral health care, even, if they’re having difficulty coping or just need a way to talk through stuff.

“If treatment is warranted, there are state-funded programs,” Roselius explained, which can include receiving medications through the state health department.

Vernon and Roselius have worked with HIV and AIDS patients who were “pretty much refusing care until they realized the tenderness, including from our providers; the openness to go to behavioral health and the way the state Health Department contacted them with amazing attitude,” Vernon said. “And we work to get them help and free care.”

Another important aspect to treatment is partner notification, which Roselius and Vernon encouraged. It is key to reducing and preventing the spread of STDs.

The CDC estimates about 14 million people, including teens, contract HPV (human papillomavirus) every year, making it the most common sexually transmitted infection. Many who have it show no symptoms.

It’s the primary cause of many cervical, throat, penile and vaginal/vulvar cancers, as well as genital warts. Two strains of HPV are responsible for 70 percent of cases of cervical cancer caused by the virus.

Doctors also screen women for HPV during Pap smears, but unfortunately, there is no test for men, which is why prevention is paramount. CPN clinics administer the HPV vaccine Gardasil to its patients at no cost.

“The nine viruses covered in HPV9 (the vaccine) are responsible for 90 percent of cervical cancer cases and … 90 percent of genital warts cases,” Vernon said.

Nearly every unvaccinated adult acquires HPV at some point in their lifetime, according to the Centers for Disease Control and Prevention. Seventy-Nine million Americans are infected with the virus.

The CDC recommends that both boys and girls receive HPV vaccinations by age 11 or 12. “Catch-up” vaccines are generally recommended for men through age 21 and women through age 26 who have not yet received or didn’t finish vaccine treatment.

Vernon called Gardasil “a miracle drug,” although some parents hesitate when considering the three-shot vaccine for their preteen children. It is most effective at that age, as their HPV exposure risk is the lowest.

“We have no other medication or vaccine that can prevent cancer,” Roselius explained.

Positive results for chlamydia, gonorrhea, syphilis, hepatitis C, HIV and AIDS are anonymously reported to the Oklahoma State Department of Health’s Public Health Investigation and Disease Detection of Oklahoma System, or PHIDDO, where authorized health professionals can research and track health diagnoses in real time. The system also allows health care providers to detect trends and outbreaks in their communities.