Acclaimed Native American chef Loretta Barrett Oden’s life is an exciting one. At 75, she has countless stories to tell ranging from fishing for salmon in the Pacific Northwest to sipping wine with Oscar-winning filmmaker Francis Ford Coppola. She owned and ran a successful restaurant in New Mexico, Corn Dance Café, with her oldest son Clay.

She is perhaps best known as the host of the PBS miniseries Seasoned with Spirit: A Native Cook’s Journey. Released in 2006, the show highlights Barrett Oden’s travels from the desert and Gulf Coast to the plains and Louisiana bayou as she harvests ingredients and prepares meals alongside other indigenous cooks. She does everything from canoeing down a river to hunting cactus in the sand, all in the name of creating amazing Native cuisine.

Barrett Oden is working on a new project with AARP titled Native Origins. The online video series focuses on basic Native American meals for elders, caregivers and loved ones to prepare at home. AARP is releasing clips through November in honor of National Native American Indian Heritage Month.

Episodes were shot at Mitsitam Café, located inside of the Smithsonian Institution’s National Museum of the American Indian in Washington D.C.

“It was great fun,” Barrett Oden said. “They call me ‘One-Shot Loretta’ because I just zipped through the recipes.” She uses both traditional and modern ingredients in the cooking demonstrations, focusing on indigenous crops including the Three Sisters: corns, beans and squash.

One recipe she showcases in the series is her Three Sisters and Friends salad.

“It’s a lovely salad and the ‘friends’ included in this are quinoa, and the Ojibwa had gathered wild rice that I sourced from Red Lake up in Minnesota. So, it’s a salad with a really light, slightly sweet vinaigrette that can be served at room temperature, and it’s so healthy that it’s just disgusting,” she said, then laughed. 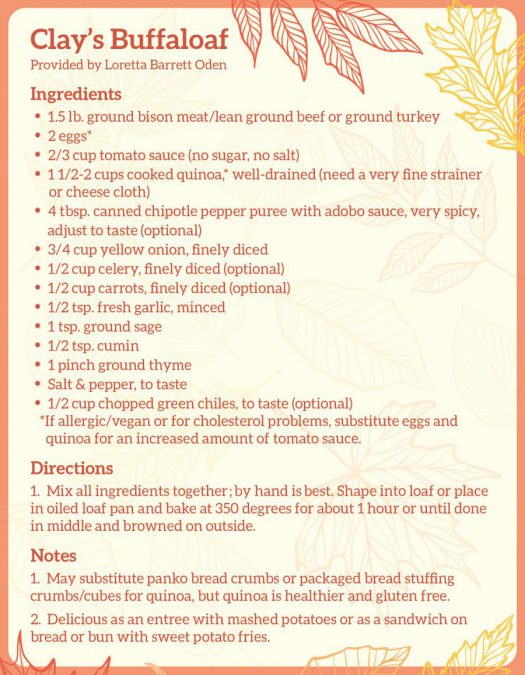 Barrett Oden grew up in a kitchen filled with generations of women cooking and gardening together.

“I think the first thing I ever prepared in grandma’s kitchen was standing up on a chair with the apron tied around me,” she said. “I was rolling out the crackers between two pieces of wax paper to make salmon croquettes out of one can of salmon.”

She also reminisces about cultivating food and spices just outside the door of her grandmother’s kitchen and how her mom could grow anything.

“I’ll never forget, nor will I be able to replicate, the taste of those big ol’ tomatoes coming fresh out of the garden, warm from the sun, and they’re juicy and delicious,” Barrett Oden said.

When she can, she encourages people to garden, too, for a better, healthier lifestyle.

“That’s what I strive for in trying to get people to look back and recapture some of the ways we used to eat real food,” she said. As a young woman beginning her career, “it just became, literally, my all-consuming passion to know more about how we ate in a much healthier way before [European] contact. So all of my foods are pretty much precontact foods with a few sprinkles of modern-day ingredients.”

Her global excursions have taught her that localized agriculture adds zest to recipes that homogenous farming cannot. The friends she has made and the originality of indigenous cuisine keep the recipes fresh and the ideas flowing.

Her philosophy on cooking pairs perfectly with her views on food sovereignty and as a founding council member of the Native American Food Sovereignty Alliance, a nonprofit group working to ensure Native people are free to develop and grow their own food and food systems in traditional, tribal manners.

Specifically for Potawatomi, she believes food sovereignty is important for carrying on tribal culture. “We’re an oral tradition people, so when those stories of how to do things are not being passed from generation to generation, they get lost,” Barrett Oden said. “Everything has a story and those stories are so important. We also sing and dance for the rain. We celebrate, and we sing and dance for the harvest. It’s really taking a look back at what the Creator gave us.”

She also emphasizes the necessity of bridging generational divides and eliminating food deserts, even urban ones.

Barrett Oden hopes her work with AARP grows into more episodes and her adventures never stop. She likes that local restaurants and ingredients are becoming more important, as opposed to frozen and fast food. “The buzzwords today are regional, seasonal cuisine,” she said. “That’s what we’ve done for probably close to 10,000 years.” After spending a career highlighting the origins of agriculture as a food historian and chef, Barrett Oden has made herself part of the future of food.