‘A sense of pride’ in this room: Boursaw, others donate military mementos for display 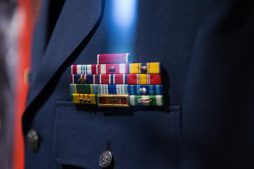 Along with the traveling exhibit honoring tribal veterans from the Smithsonian Institution’s National Museum of the American Indian, the Citizen Potawatomi Nation Cultural Heritage Center’s Long Room showcases photos of CPN military members on the Veterans Wall of Honor. There is also a case dedicated to each of the wars and conflicts in which tribal members have fought. Many tribal veterans have donated or loaned mementos for the displays.

One of those veterans is Jon Boursaw, District 4 Legislator, who represents approximately 2,800 members in Kansas and was also was a director of the CHC from 2006-2008.

Boursaw joined the U.S. Air Force in October 1961 and served his country for more than 24 years. Before that, he was an Air Force ROTC graduate of Washburn University in Topeka, Kansas, commissioned as a Second Lieutenant. He served at several U.S. bases, including the Pentagon, as well as internationally in Canada, Thailand, Germany and Italy before retiring in January 1986.

“We had this thing called the draft, and I felt that going through ROTC and being commissioned as an officer was better than running my risk of being drafted into the army,” he said about why he decided to join the military.

He stayed longer than the three years he originally committed to because each of his assignments was better than the last.

Boursaw donated two Air Force uniforms and two other gifts he collected during his time in the military to the CHC. These items are displayed in a case entitled “The Brave – The Strong Hearted” on the east wall of the Long Room.

“The two uniforms in the display case are what the authorized uniforms were at the time of my retirement,” he said. “The short jacket is from the Air Force’s mess dress and is the equivalent of a tuxedo. It is worn with a cummerbund, pleated white shirt with studs and bow tie. The longer jacket, the most commonly worn uniform, is called the service dress uniform and is worn with a light-blue shirt and dark-blue tie.”

In addition to the uniforms, the case also includes a wooden No. 1 with a blue diamond, which symbolizes the ranking first sergeant. It was gifted to Boursaw while he was base commander at Aviano Air Base in northern Italy.

“Upon my departure from Aviano Air Base, I was given a large numeral one by the first sergeants assigned to the base. It is one of the several items I collected during my 24-plus years in the Air Force, but one that I’m most proud of receiving,” Boursaw said. “It was a great honor to be recognized by that group of individuals.”

Another item displayed in the case is a brass bowl that was given to Boursaw by the wartime commander in chief of the Turkish Defense Forces, the Turkish equivalent to the chairman of the U.S. Joint Chiefs of Staff, while visiting Aviano Air Base during a brief tour of Air Force units in Europe.

After retiring from the Air Force, Boursaw returned to Kansas, where he worked as executive director of the Prairie Band Potawatomi Nation for more than six years. Then, CPN Tribal Chairman John “Rocky” Barrett offered him a job as CPN Cultural Heritage Center director in Shawnee, Oklahoma, in 2006. One of the first projects Boursaw worked on was commissioned by Chairman Barrett was to create the Veterans Wall of Honor, which continues to grow. He credits a great staff to completing the mission of creating the wall of honor.

“There’s always a sense of pride when I walk in this room,” he said as he examined the Long Room’s west wall and the Veterans Wall of Honor, which displays photographs of CPN tribal members who served in the United States military. “It’s important to me and the other veterans that we recognize the contributions of those who have served before us, those who served with us and those who have served since we left the services.”

Learn more about the updates in the CPN Cultural Heritage Center Long Room at potawatomiheritage.org.