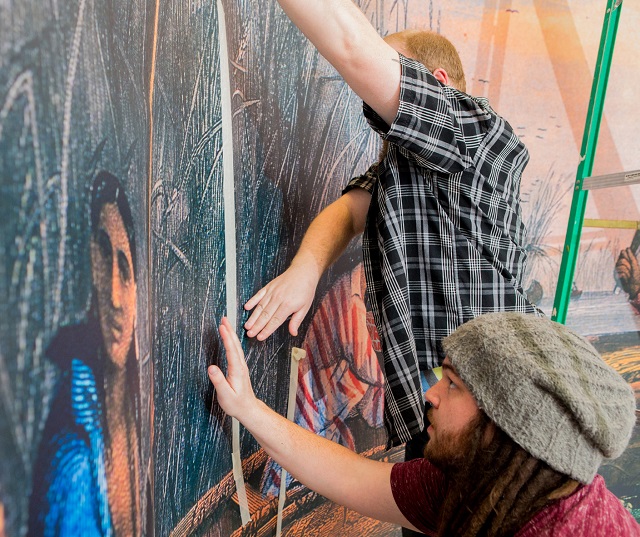 The Citizen Potawatomi Nation Cultural Heritage Center staff and CPN tribal members have been working diligently since the flood of 2014 to create an exhibit detailing Potawatomi life from pre-colonial times to now. The exhibit’s planning phase took place during that time, though most of the creation and installation occurred in the past year. Along with CHC staff and tribal members like CPN Graphic Designer Trey DeLonais and CPN Aviary Manager Jennifer Randell, FireLake Designs has played an integral part of the creation process.

CHC Director Kelli Mosteller, Ph.D., told the Hownikan that the graphics and murals in the exhibits are from photographs and drawings in the CHC’s collections.

“Imagery is a really critical piece in the new exhibits because we wanted to take photographs we have of tribal members to incorporate people who were actually members of the tribe,” Mosteller said. “Having someone on site at the nation who can understand our vision has been important. Without having FireLake Designs here, this would be a much more complicated process and I don’t know if a lot of things we are doing mural-wise would have been possible.”

Mosteller explained that in the past exhibits, mannequins were used to express Potawatomi culture because of time and price constraints.

“We wanted to go with murals and cutouts of actual tribal members’ images instead of the mannequins because we had the time and the resources to do so,” Mosteller said. “With the flood, it gave us this opportunity to move walls around and start with a fresh slate. We were able to build out more walls and approach this in a way that brought the history that we have here into the space.”

While experimenting with different materials and processes, FireLake Designs printed and cut artwork and text for images on various walls and objects with the help and direction of the CHC staff. According to FireLake Designs Director Lakisha Meade, some projects have been outside of the team’s normal scope of work, but they have enjoyed working on the projects and are proud of each piece they’ve helped create. The partnership has been mutually beneficial – stretching both teams to learn new skills.

“We started the first section more than a year ago with the seven tall light boxes with water color animal paintings on each of them, along with the vinyl text that explains the Seven Fires Prophecies around each light box. It took four of us an entire day to get the graphics squeegeed onto the light boxes, and two people a few days to apply the vinyl cut lettering onto the walls around them,” Johns said. “I remember when we finished the last letter of this section and got to stand back in awe of what we had all just created together.”

Since then, the team has worked on a few large murals – even one on a curved wall – and several smaller graphics for the museum exhibits and veteran’s wall of honor.

“Working on the new CHC has been an amazing journey from a year ago, it’s hard to believe that our work is almost done,” Johns said. “Everything is turning out so beautiful and I can’t wait for all to see it.”

To learn more about the services and products offered by FireLake Designs, please visit http://firelakedesigns.com or stop by their storefront at 1109 S. Gordon Cooper Drive in Shawnee, Oklahoma.