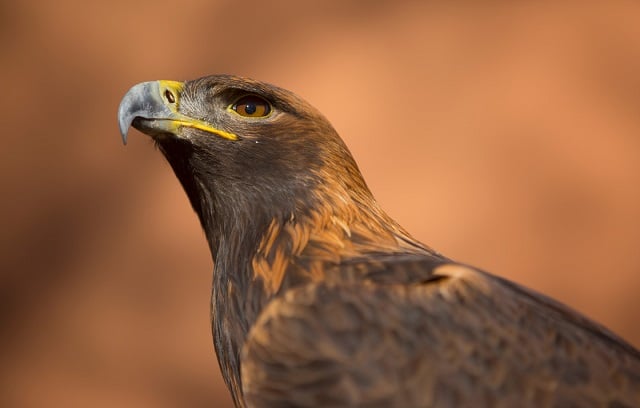 A law passed in January 2017 and overturned in March is raising concerns with environmentalists around the U.S.

A policy implemented by former Fish and Wildlife Service Director Dan Ashe on Jan. 19, the Obama administration’s last full day in office, banned the use of lead ammunition and fishing tackle on all FWS wildlife refuges that allow hunting or fishing. The purpose was to prevent wildlife from being exposed to lead poisoning.

In March, Trump administration Interior Secretary Ryan Zinke signed an order that grants lead ammunition on federal land again. Although many sportsmen are relieved, the new order isn’t settling well with others.

At Citizen Potawatomi Nation’s eagle aviary, staff members overseeing injured birds see the impact of lead ammunition on those in their care on a daily basis. One eagle in particular, named Myanabe, lives with complications from lead poisoning.

Found during deer hunting season near the Oklahoma-Kansas border, Dunham suspects he had been hit by a car. After blood tests revealed high levels of lead, poisoning was suspected. Lead poisoning in eagles can result in the birds being unable to fly to high altitudes, and could have been why Myanabe couldn’t fly high enough to cross the road without colliding with a vehicle. Myanabe was also experiencing other complications such as seizures and not molting his feathers like he should have been.

“Lead poisoning causes weakness, muscle fatigue and all kinds of problems with these birds. That’s why he came to us,” Dunham said.

The Citizen Potawatomi Nation Eagle Aviary is home to 16 eagles, two of which now reside at the aviary because of the consumption of lead while in the wild.

“More than half of the birds that come into rehab facilities have elevated lead levels and at least a fourth of those have lead levels that are fatal,” Dunham said.

According to the National Park Services, lead poisoning through ingestion of spent lead bullets and shell shot have a negative effect on bald eagles. More than 500 scientific studies published since 1898 have documented that worldwide, 134 species of wildlife are negatively affected by lead ammunition.

According to Dunham, eagles ingest lead in the same they would calcium, sending it directly to their bones.

“Once that lead gets into their system, those digestive juices break that lead down and it just wreaks havoc,” Dunham said. “It doesn’t take that much. A raccoon or a possum that comes along and eats those leftovers, it doesn’t affect them the same way it affects these guys (the eagles) because their body masses are so low.”

According to The Humane Society of The United States, hunters and anglers deposit tens of thousands of tons of lead in the environment. They also estimate between 10 and 20 million birds and other animals—including more than 130 species—die each year from lead poisoning.

Jack Barrett, owner of BDC Gunroom, offered some tips to help cut down on the risk of lead contamination to animals. Barrett suggested that hunters can attempt to recover their projectiles by burying or “packing out the gut pile,” meaning hunters would pick up the projectile pieces and take it with them.

The United States has long legislated the removal of lead on many products, from gasoline to pencils. Yet the debate on lead ammunition remains unsettled between environmentalists and sportsmen. This is in part due to the benefits the latter enjoy with lead ammunition. While there are other options for ammunition besides lead based, sportsmen like Barrett say it’s the best quality.

“The benefits of lead ammo as a projectile is its weight, pure and simple. It offers the heaviest weight for a particular volume based on cost…the heaviest material for the least amount of money,” Barrett said.

Barrett also says that it’s not just about cost. In order for a humane and clean kill to take place while hunting, heavy ammo must move at a high velocity.

“You want deep penetration but not over penetration because you don’t want it to exit and perhaps pose a danger to another animal. That weight affects how it performs when it hits tissue.”

Dunham says that her goal isn’t to eliminate hunting altogether, but she does want to encourage hunters to use leadless ammunition or find ways to responsibly dispose of the bullets after their hunt.

“Hunting is an integral part of land management and wildlife management. If there weren’t people out there hunting deer, we would have too many deer and an unhealthy population and unmanaged land.”

Myanabe is as healed as the staff at the aviary say he will ever be.

“We watch him watch other birds in the pasture so we know he can see far off. It’s mainly his depth perception that he has a problem with so he will never be able to be released,” Dunham said.

At first, there was a question of whether or not they would euthanize him due to concerns over his quality of life, but Dunham says he hasn’t had a seizure now in three years.

“It’s just a matter of getting people to understand that it really is a problem,” she said. “It’s such an easy fix and it would save a lot of lives.”