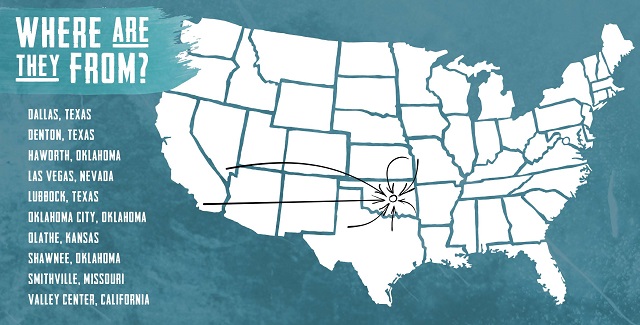 In June, 10 promising college students from across the country will travel to Citizen Potawatomi Nation tribal headquarters to participate in the six week Potawatomi Leadership Program. Each of them have different backgrounds, but share the desire to learn more about their people and gain unique experiences with their tribe.

Connor Bickford – a sophomore at the University of Kansas – will travel from Olathe, Kansas to participate. An aspiring anesthesiologist, he is interested in learning more about CPN’s healthcare services and getting community involvement and leadership experience through this program.

”In attending one district meeting with my grandmother, I met more than five family members, ranging from great aunts and uncles to cousins, and it opened my eyes to the depth of my family within the tribe,” said Bickford. “Now with this program, I am excited at the possibility of discovering more family.”

Alexandra Trousdale – an aspiring criminal attorney – will begin her sophomore year at University of Nevada, Las Vegas this fall after participating in the PLP. She hopes to make connections this summer that will help her grow in her heritage and career.

“Becoming more connected with the tribe allows me more opportunities to give back through what I learn in school and in practice,” she said. “Often times, attorneys are encouraged to take on pro-bono cases, which I will be able to do for members of my tribe given the opportunity and necessity.”

Gregory Murphy will be traveling the furthest from Valley Center, California to Shawnee, Oklahoma for the PLP this summer and then for his freshman year at St. Gregory’s University in the fall. Pride in his tribe is apparent even though he grew up thousands of miles from tribal headquarters and seeks to use a degree in criminal justice to work at CPN.

“My future plans are to join the tribal police and show our youth that law enforcement can be respected, but not feared,” Murphy said. “It is also a two way street, a mutual respect. Creating and implementing programs for tribal youth to interact with law enforcement on a mentorship level can enforce positive actions and goodwill in our youth.”

Jackson Barrett – who was born and raised in Shawnee – will be the closest to home during the program. He even attended the CPN Child Development Center as a child. The Seminole State College sophomore decided to apply for the program after reading comments from past participants about memories and friends made who are still close years later.

“We, as a tribe, need more young leaders to step up and take over the roles of our elders,” Barrett said. “I think that the Potawatomi Leadership Program will help me advance my leadership skills, gain more knowledge about the Tribe and its culture, and meet new people that I would not have had the opportunity to have met otherwise.”

College sophomore Kaitlyn Precure has been interested in her ancestry ever since she moved to Shawnee to attend Oklahoma Baptist University.
Although her major is business management, she is also interested in learning more about Native peoples suffering from addiction.

“After participating in the PLP, Iwould like to use my experience to help people understand how addiction affects individuals differently and could even be related to genetics,” Precure said. “Being able to show others how they can pursue the help they need is how I would like to help a portion of the tribal community, because addiction affects all ages and members of a family.”

Dylan Reece – who also is a sophomore at OBU – looks forward to connecting with other tribal members his age who are pursuing higher education
and learning more about the economics and culture of his tribe.

“As a current business student at Oklahoma Baptist University, I have learned what the inside of the business world looks like and how it operates,” Reece said. “When I learned about my own tribe’s achievements in health care, cultural prestige, and public services I was very captivated by what I saw.”

Missouri native Christina Foster is pursuing a degree in art from the University of Central Missouri and hopes this experience provide greater awareness of her culture. She would like to create artwork featuring the tribe to preserve and create awareness for CPN heritage, as well as have the opportunity to learn the dancing of her ancestors.

“I have been instructed in ballet, tap, jazz, modern, contemporary, musical theatre, and hip hop, but I have never had the opportunity to learn and take part in native dancing in the truest sense. It would be an honor to learn and participate in traditional ceremonial dances,” Foster said. “I’ve also taken note of our Nation’s success due to effective leadership, and I would like to learn what makes it so successful and how the government works together to maintain balance.”

Three students from Texas will participate in the PLP this summer. Lubbock native John Wilkerson is a sophomore at Texas Tech University and studies political science and history. He said he is fascinated by the functions of various government institutions and would love to learn more about his family history.

“As a perpetual student of history I find great pleasure in knowing the past, and learning about my own history would be an unimaginable experience. After finishing my undergraduate degree, I would like to attend the University of Oxford, then move onto Harvard’s Ph.D. dual-degree program,” he explained. “After doing all of this my long-term career goal is to run for elected office and voice the needs of minorities who receive
little representation.”

Xaviera Stevens – a sophomore at Texas Woman’s University in Denton – is looking forward to learning the stories of the tribe and telling them to her four younger siblings and in various forms of media. She believes the best way to learn is through experience, which is why she was interested
in the PLP.

“I have been overseas twice now and each time it has given me a new and useful perspective on social and environmental issues,” she said. “The
leadership program will, like leaving the country, give me an up close understanding of another culture.”

Dallas native Mary Darvin is another student taking advantage of the partnership between CPN and St. Gregory’s University. The sophomore psychology and history major is the vice president of the CPN club at the university and completed the Potawatomi language course.

To learn more about the PLP, please visit plp.potawatomi.org