Adame seeks to regain seat in D4 as challenger in 2017 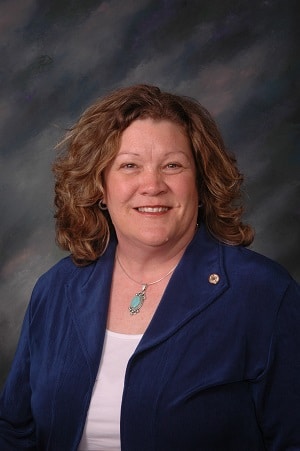 In Citizen Potawatomi Nation’s legislative District 4, which encompasses the State of Kansas, challenger Theresa Adame will face off against incumbent Jon Boursaw. This will be the third time that Boursaw and Adame meet in a legislative race.

Adame’s parents are both from the Rossville-Topeka, Kansas area. She grew up in Topeka and graduated from Hayden High School. She married soon after, moved to Wichita for a short time before returning to Topeka and taking a job in business administration for Capital Orthopedic Center. It’s a position that has served her well, as she recently noted the completion of her 35th work anniversary there. She helps run the day-to-day business of the Topeka-based firm that creates and sells artificial limbs and braces.

“I am very fortunate to work for a company that specializes in pediatrics, helping a lot of children with birth defects and congenital afflictions,” she said. The work has allowed her to commit time to service in the community for many of the issues dealt with by the users of her employer’s products.

In addition to her volunteer and charitable service, Adame believes her experience in dealing with federal contacts, human resources’ responsibilities and other tasks will help her should she win the June 2017 election.

Adame was narrowly defeated in the June 2013 tribal election by current incumbent Jon Boursaw, and she noted that she would bring experience as a CPN tribal legislator if elected to serve again. Part of her motivation in running again is due to her desire to show leadership to younger generations, something she’s done throughout her life.

“I was the leader of a girl scout troop for one of my children. I wanted to show them the importance of a strong female role model. It was something that drove me in my last term in the tribal legislature also,” she said.

Her first term as a CPN legislator was in part inspired by her father’s interest in the tribe. The Navarre family descendant said she initially became involved in tribal politics because of her father, Raymond Martin, who she accompanied to tribal meetings at age 17. When they would return home, Adame would report back to her relatives what had been discussed, marking her first role as an unofficial representative to her own family. It’s that experience that resonates with her view on the tribe, its government and people today.

“When I think of a tribe, I think of family,” she said. “It was visiting family and participating in our tribal activities.”

This involvement is somewhat of a tradition. Her grandmother had 54 grandchildren, and Adame recalled her loading many of them up on a journey to the tribal rolls registration at the Prairie Band Potawatomi administration building. In the days before CPN had the funding and revenue available, partnerships with their Kansas-based, cousin tribe were necessary to help keep what was then called the Citizen Band Potawatomi connected to its citizens outside Oklahoma.

During her last term in the tribal legislature, Adame said that one of the significant accomplishments for the Kansas-based Citizen Potawatomi was the development of health care there in the form of community health reps on site in Rossville. It’s a program that’s near to her heart, as her family is some of the users of the program’s home health visits.

“When I first got in to the legislature, my dad and aunt told me they were very proud of me but said ‘do not mess with our health benefits,’” she recalled with a chuckle.

Despite losing the 2013 vote by only three votes, Adame said support in the four years since then prompted her to once again run for District 4’s seat.

Should she succeed, an issue she’ll work towards is more efficient electoral procedures.

“I would like to see the voting change so that we just receive a ballot and not have to request a ballot,” she said. “I know a lot of the elders are confused by the process and I think we could simplify it.”

Focusing on efficiency there is a start for Adame if she’s elected to the seat. Her long term goal is to serve in that role she has since age 17, reporting back to her family and tribe on how best the Nation can help.