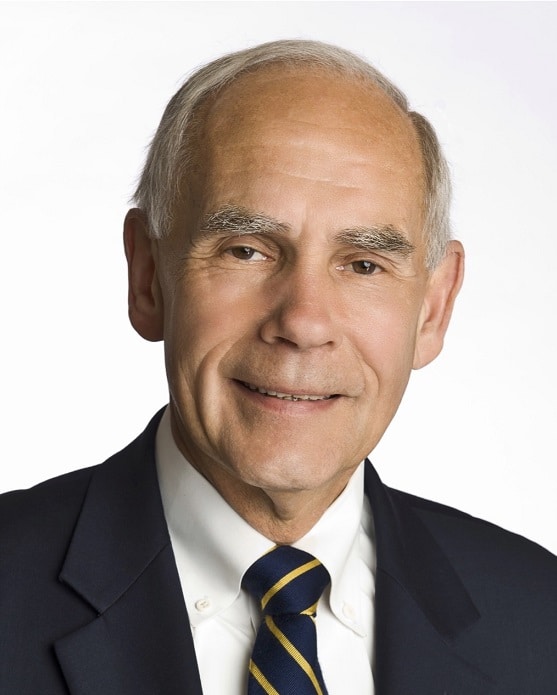 While many Citizen Potawatomi know of the tribe’s ownership of a bank, First National Bank and Trust Co., few know that amongst its board of directors is an individual whose previous positions include principal chief of the Cherokee Nation, assistant secretary of Indian Affairs and special trustee for American Indians in what has become known as the Cobell Trust Settlement. Ross Swimmer, an attorney and businessman with an extensive background in banking and government service, will be added to the Putnam City Schools Wall of Fame honorees in April 2017 for his service in the private and public sector as an influential Oklahoman. Swimmer spoke with the Hownikan about tribal opportunities in the banking sector, returning control to tribal lands from Washington D.C. and about his work with the Native Americans for Trump coalition and views on the upcoming administration’s view towards Indian Country.

Getting involved in Indian Country

Swimmer was a successful attorney in Oklahoma City, working with Great Society affordable housing programs established by the Johnson Administration. Like anyone who has dealt with the various legalities and requirements that come with federal contracts, much of his practice involved setting up the right legal frameworks for clients that would build many of these housing complexes and homes for low-income families.

Around that time in 1971, his father, a Cherokee citizen, sat on an advisory board of then-Cherokee Principal Chief William Wayne Keeler. The principal chief was in the midst of developing programs that would simplify the ability to open trust lands for the Cherokee Nation that were in dispute due to numerous lease holders and other complicating factors.

“Dad told me ‘they’re having all kinds of problems getting Indian land titles cleared in eastern Oklahoma,’” recalled Swimmer. “Because as an Indian, if you wanted a house…you had to furnish an acre of land, free and clear. So often times you had an allotment but it could be in trust or had some other burden on it.”

Extensive legal training and understanding of the complexities of real estate and land trust issues were needed, making Swimmer an excellent candidate to assist his tribe. At the encouragement of his father, he would voluntarily travel to Tahlequah one or two days a week to help sort out these issues.

“Then I begin to see what they were doing, and the tribe was just beginning to grow,” he said.

In 1972 he joined the Cherokee Nation Housing Authority as an in house counsel. Before long he transitioned into the tribal government’s in-house attorney.

In 1974, Principal Chief Keeler announced he would not seek reelection, leading to a number of candidates to seek the position. Swimmer said that despite his understanding of the issues facing his tribe and motivation to see it succeed, he was not political.

Despite this, Swimmer explained that as the candidate filing deadline approached Principal Chief Keeler said he was still in search of a successor he could support that would take the tribe to the next level. During a discussion one evening, Keeler asked him if he knew of anyone that would be a good candidate.

According to Swimmer, the longtime Cherokee leader looked at him and said “’Well I think I know who that should be’ and he pointed at me, and the rest is history.”

Swimmer spent the next few months travelling to Cherokee Nation gatherings as far flung as California to meet the tribe’s voters. He even rode out an attempt to eliminate his candidacy after he had filed when opponents tried to change the age limit for principal chief to the age of 35 rather than what it had been when he’d registered, 30.

Elected in 1975, he served a decade as the leader of one of the largest and most influential tribal nations in the United States.

Banking: an opportunity for tribal wealth

Though an attorney by trade, Swimmer has also been involved in the banking sector. During his time as head of the federal Bureau of Indian Affairs during Ronald Reagan’s second presidential administration, Swimmer said he was a supporter of CPN and other tribes owning a bank.

“From a tribal point of view, I saw it as an opportunity for a tribe to accumulate wealth without having the constant request for per capita payments,” said Swimmer.

Upon his return to the private sector in 1989, First National Bank and Trust Co. invited Swimmer to sit on the board of directors.

“I consider it quite a privilege because the board is made up of members of the Potawatomi tribe, except for a couple of us, and they’ve done a wonderful job of taking what was a closed bank under FDIC rule and turned it into a very good, very strong and well managed bank,” he said.

Swimmer is familiar with the challenges tribal governments have in building up capital from his time as principal chief of the Cherokee Nation and as head of the BIA. While a bank makes money, those funds go into its own capital funds to grow the bank itself.

“You can’t grow the bank unless you grow your capital,” said Swimmer. “But it doesn’t throw off a lot of cash.”

The specific purpose of those monies for reinvestment in the bank tends to keep short term political machinations such as pulling money out for per capita payments or other ventures a tribal government may seek to focus on, more difficult.

“What you’re doing is creating wealth and you’re putting that money back in a growing operation…this is an example that you can grow.”

At CPN, it’s not difficult to see that notion put into practice, especially when contrasting past and current circumstances. Coinciding with the time CPN purchased the bank, the tribe’s assets and commercial holdings have grown at a rapid rate. Tribal businesses and programs have diversified and expanded, often times through the use of financing available through First National Bank and Trust Co. and entities like the Citizen Potawatomi Community Development Corporation.

In his admittedly “naïve” first talks with staff as the newly appointed Assistant Secretary for Indian Affairs in 1985, a 40-year old Swimmer said “You know, the object here is to work yourselves out of a job. We don’t need the BIA, we need to plan 10 years from now that we’ve worked ourselves out of a job and things are going well on the reservation…well that went over like a lead balloon.”

Swimmer also noted that while he believes that tribal nations are more sophisticated than they were when he took up his post as Assistant Secretary for Indian Affairs during the Reagan Administration, the overly burdensome relationship with the federal government continues to hinder development of Indian Country. Despite progress in certain areas, like the HEARTH Act, which gives tribes more say on economic developments on their own lands held in trust by the U.S., Swimmer noted that more can be done to remove Washington D.C. from the equation.

He acknowledged that while legitimate concerns tribes could wantonly sell parcels of their land to the benefit of only a few tribal members or leaders, a legal framework could be developed to ensure tribal ownership of land whether it is held in trust or not.

“That could remain a federal responsibility, that if a tribe wanted to dispose of land they’d have to go back to the fed to do it. But everything else, especially environmental issues, historical preservation…those could all be put under the tribal law and the tribe could administer it.”

The former BIA head is amongst a number of former and current officials who joined the group Native Americans for Trump, which is led by Oklahoma Congressman and Cherokee Nation citizen Markwayne Mullin. The group’s aim is to guide the new administration on policy issues and appointments, which Swimmer said was to promote the appointment of more Native Americans to federal agencies like the treasury, housing and urban development and health and human services.

In December, Congressmen Mullin drew some criticism for saying that the Trump Administration should privatize tribal lands for energy development. Yet Swimmer cautioned that the congressman’s use of the term “privatize” was unfortunate and a likely misstatement in the context of a broader discussion of removing the burden of federal oversight on tribal lands.

“The idea was to allow the tribes to use their property as though it was private,” explained Swimmer. “But not privatize. We will never, as far as I’m concerned, see a time when tribes are told that they need to remove themselves from the federal government and run their own land.”

He conceded that such allusions strike a painful note in Indian Country, where memories still vividly recall the termination era where the federal government attempted to destroy tribes by revoking their status as sovereign nations.

Swimmer’s view on the incoming administration appears to be one of opportunity for tribes. Contrary to concerns raised by opponents of the new president, the Trump Administration may be open to hearing policies that allow for greater control of tribal lands by tribal nations themselves – specifically over what can be done on them to promote economic and resource development.