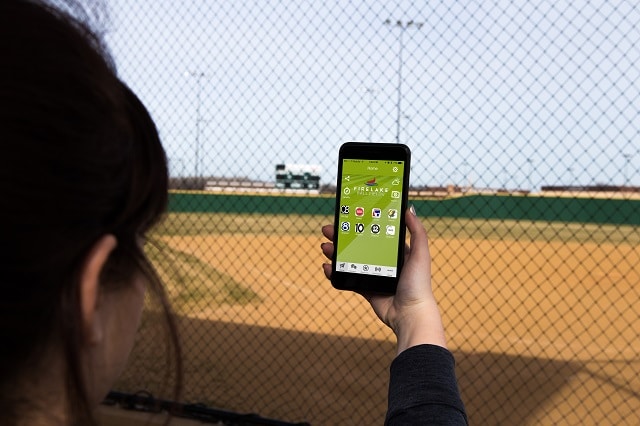 If it’s close to spring time in central Oklahoma that means that CPN-owned FireLake Ball Fields is back open for business. Because there are increasing numbers of teams, players, coaches and parents involved, management recently began updating scores, schedules and information through a smartphone app available in the iTunes and Google Play stores.

“We wanted to be able to send updated information to inform our parents, coaches and teams of rain delays, time changes or field numbers for their games,” said FireLake Ball Fields Director Kelly Reavis. “By having the app on their phone, parents and grandparents don’t have to wait on the coach.”

Reavis and the management of the ball fields update the app’s information each round of a competition once the last out is called in a game. Brackets and pool games are updated, and this allows spectators at the ball park or checking on a team’s progress in a tournament to stay informed from home. The teams are broken up by age group, providing for an easy and simple way of finding teams and schedules.

“I’ve even had a grandparent who isn’t from near here thank us for having the app because they were able to keep track of their grandkid’s team during a tournament,” noted Reavis.

The app is available in both Google Play and iTunes stores under ‘Ballfields at Firelake’ and can be verified by the picture, which is the same logo as the ball fields website and Facebook pages. It was created by a Denver-based app and mobile-website design firm, AKA 142 Media.

Reavis had been looking for a way to provide these kinds of updates to families and coaches for some time. While the ball fields’ staff updates tournament information on the website www.OklahomaBall.com, typically that’s a source more familiar to coaches and tournament organizers only. If one isn’t familiar with the format of the website, it is difficult to navigate and track an individual team’s progress during a hectic tournament weekend. At FireLake, Reavis estimates that on average there are 40 teams playing weekly during its busy seasons.

Larry James, a part time employee during the summer months also serves as wrestling coach at Shawnee High School during the year and told Reavis of the app that he uses to update his student athletes, parents and coaches.

FireLake has developed into the premier destination for numerous high school softball state tournament competitions due to its high quality facilities and central location. It has hosted the USSA World Series, Jim Thorpe Games as well as numerous collegiate competitions. It’s digital presence isn’t only found in the iTunes and Google Play stores, but is also on social media at Facebook.com/BallFieldsAtFireLake and at www.theballfieldsatfirelake.com. The physical address is 18160 Rangeline Road, Shawnee, OK 74801 and host tournaments nearly all year round.