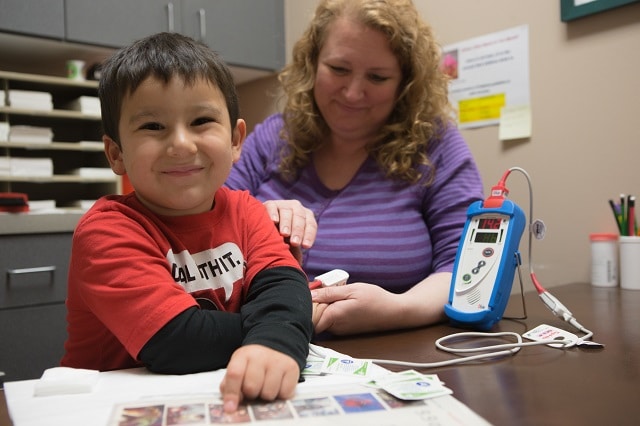 Caring for a newborn or toddler is a hectic process. Aside from the day-to-day responsibilities, parents and guardians make sure to get them to doctors’ appointments and ensure they’re getting a healthy diet. The Citizen Potawatomi Nation Women, Infant, Children Program plays a role in assisting with some of the challenges facing parents of newborns and young children. It recently implemented a new practice into its program that monitors iron levels in these children and nursing mothers. CPN WIC Nutrition and Breastfeeding Coordinator Cheryl Richardson answered some questions about the new ‘No Stick WIC’ format.

How often were moms and kids being stuck to check their iron levels?

“Children over two years old were being stuck once a year if their iron level was good. If it was low, they were stuck every six months.

“Being stuck with a lancet and seeing blood, plus some parents’ comments can be traumatizing to a child to the point they don’t want to step foot in the WIC office.”

What is done now that the ‘No Stick WIC’ is in place? How do you check iron levels?

“Trained staff checks the level using a machine that has a sensor that clips on the finger and reads the hemoglobin through the fingernail. At this time a child needs to weigh around 22 pounds for us to use this method. We still have to stick nine month olds and children under 2 years. We are waiting on the approval of the sensors for infants in the U.S.”

What signs should a parent look for if they’re concerned about an iron deficiency?

“Because the hemoglobin part of blood carries oxygen to all parts of the body, signs of iron deficiency can range from tiredness to getting sick easily to craving things like ice or dirt.

“Iron is not absorbed well from foods. Protein and Vitamin C can help the body absorb iron better. Meats, beans and dark leafy greens are some of the best sources of iron.”