“What happened with the lottery?” – The straw man of the Oklahoma budget shortfall 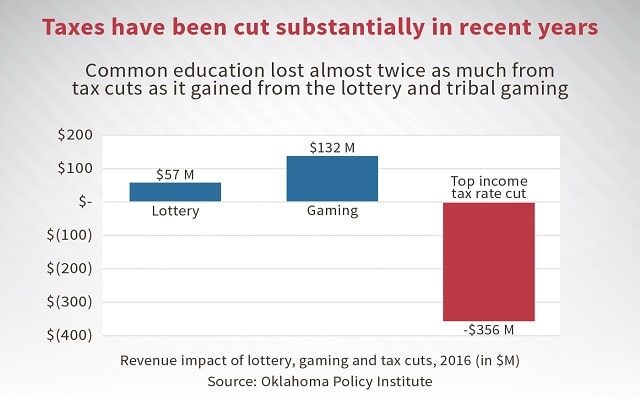 As Oklahoma enters yet another year with a staggering budget shortfall – estimated to be $878 million as the 2017 Oklahoma Legislative Session begins – a common rallying cry has been for increased funding for education. Politicians at the state capitol have heard the call, with more than a dozen education related bills filed ahead of the 2017 session. This comes in light of the defeat of a November 2016 ballot initiative that sought to raise teacher pay in Oklahoma, which is currently among the lowest in the United States.

One common riposte by critics of increased education funding initiatives is “Wasn’t tribal gaming and the state lottery supposed to fund education?”

On its face, this is an understandable concern for the nearly 60 percent of Oklahoma voters that approved tribal gaming in 2004. One of the main selling points to those who supported the passage of the lottery and tribal gaming was the promise that funds from their revenues would be allocated for common education.

Like any discussion on the budget however, the details and circumstances of this arrangement aren’t as clear cut as the question itself.

Yet while the funds are remitted to the state, it remains unclear if those monies end up where they are supposed to or if they are being siphoned off for other uses.

Secondly, despite lottery and tribal gaming bringing more than $189 million to state coffers for common education in 2016 alone, the effect of tax cuts in Oklahoma have far outweighed those figures. The Oklahoma Policy Institute estimates that top tax cuts to the top income tax rates in Oklahoma have cost $356 million.

Lottery and tribal gaming can’t be relied upon to fill this deficit, and if recent indicators are correct, their contributions to education funding in Oklahoma may lessen over time. The Oklahoma Lottery Commission is required to return 35 percent of its profits to the Education Trust Fund, yet that cap also prevents the lottery from offering higher prizes. Tribal gaming faces a similar issue, with 31 of the state’s 39 Indian Nations owning and operating these facilities, the market has become saturated. In 2014, revenues from tribal gaming enterprises and racetracks actually fell compared to the year before, though they recovered to set a new record in 2015.

The lottery and tribal gaming have helped mask the overall implications of tax cuts to Oklahoma’s education funding in recent years, but given current trends it would be helpful for policy makers at the state capitol to look to long term solutions in addressing the shortfall.