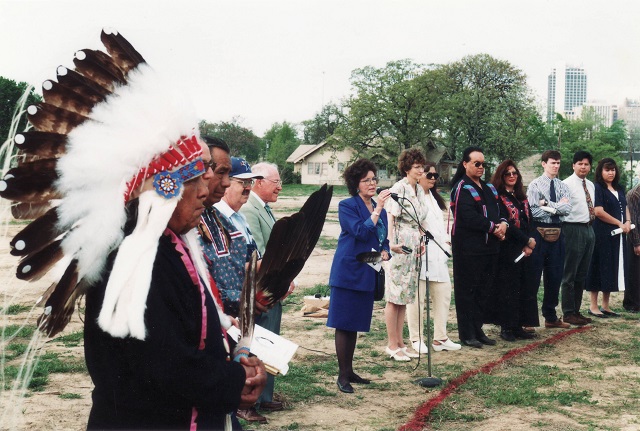 For four decades, the Indian Health Care Resource Center of Tulsa has provided quality, comprehensive health care to the city’s Native American people in a culturally sensitive manner. Born out of a need to serve an urban Indian population underserved by the city’s existing healthcare facilities, the IHCRC has worked to eliminate health disparities and strengthen the physical, mental, emotional and spiritual wellness of those it serves. With the organization since its inception has been Carmelita Wamego Skeeter, who currently serves as chief executive officer and is a Citizen Potawatomi Nation tribal member. Skeeter was recently honored by the IHCRC for her four decades of service in building the organization into what is today.

Born in Tulsa, Skeeter was a volunteer in her church’s social action group through a program called “Neighbor to Neighbor.” Her participation in the program, based in north Tulsa, helped residents in need gain access to public assistance, housing  and other social welfare programs. This, combined with her active participation in her two sons’ school activities left little time for additional work, but Skeeter made it work. She attributes her ability to multitask to her role as the eldest of 13 siblings, a management background unto itself.

Some of those siblings were active with a program called Indian Pupil Education, whose counselors knew of Skeeter’s volunteering and organizing with the Democratic Party. They approached her about working for the Indian Health Care Resource Center to conduct a needs assessment, which would be funded by the Indian Health Service.

Harking back to her role as eldest sibling, Skeeter said the focus of healthcare issues was ingrained from a young age.

“When you’re the oldest of 13 children, something’s always going on. They need healthcare,” she explained. “And when you’re working with the poor, there’s always the need for health, because if you’re not healthy you can’t work, you can’t be mobile, you can’t do anything.”

Healthcare services at tribal clinics, while often free to the tribal citizen, are paid for out of allotted federal funds from the Indian Health Service, third party billing from Medicare and private insurance plans or even by revenues from the tribal nation itself. Restrictions on funding from federal sources tied to jurisdictions mean patients seeking treatment at a tribal clinic must get to the clinic. Many of these facilities are in rural areas, far from major metropolitan areas. Skeeter’s 1976 needs assessment studied this very issue. Along with her executive director at the time, Skeeter investigated why Native Americans were not using existing healthcare facilities in Tulsa, and why Native children were missing so many days of school due to illness.

After personally visiting many of these facilities to understand the reception given to Native Americans seeking care, Skeeter noticed a startlingly trend. When checking in for service, she was questioned about how the medical bills would be paid. Intake personnel would ask a barrage of inquiries concerning her insurance status or whether either the Indian Health Service or individual tribes would foot the bill. When Skeeter responded that she would pay for the costs of treatment, almost universally the response was for her to go to the Claremore Indian Hospital, approximately 30 miles away. 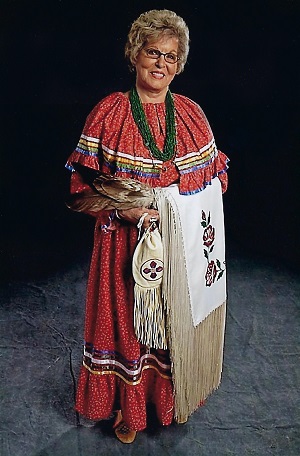 “Indians in Tulsa were either going to Claremore or Tahlequah or to Creek Nation facilities, meaning the mothers and fathers were missing days of work and kids were missing days out of school. It wasn’t just a trip down there and right back. That’s how we determined that Tulsa needed a clinic for Indian people.”

The IHCRC hired a grant writer to help find funding resources while soliciting the federal government for money specifically for Tulsa’s Indian population. Eventually they secured the volunteer services of a doctor in Tulsa and opened a small office for half a day a week. The organization grew from there, with healthcare equipment donated from military surpluses and World Medical Relief and through contracts with the Women, Infant and Children Program at Cherokee Nation. By 1978, after years of scraping together funding and resources, the IHCRC hired a full time physician.

The organization is not funded by any one tribe, but is sustained by its own fundraising and through monies from the Indian Health Service. In 1976 the budget was $76,000, while in 2016 that figure was approximately $20 million. From an initial count of four personnel, today’s roster of staff and health providers stands at 140.

Looking back at the challenges that the IHCRC encountered over the years, the Reagan Administration’s attempt to eliminate funding for urban Indian populations stands out as a seminal moment for Skeeter. As part of President Reagan’s efforts at eliminating the federal budget deficit, his administration cut funding for urban Indians. Yet area directors of the Indian Health Service realized the gap that the IHCRC and its Oklahoma City counterpart filled in the state’s healthcare system, and worked with Skeeter and fellow officials there to compromise with Congress in order to save the funding. The compromise, which began as an effort to stave off a worst case scenario, developed into a significant victory for the IHCRC.

The center began collecting Medicare and Medicaid at the same rate as IHS, which it had not been able to do prior. Skeeter credited that victory, and the center’s continued success, on positive working relationships with the state’s Congressional delegation who has advocated on the IHCRC’s behalf through the decades. Like her counterparts in the private sector might also explain, despite providing expanded services to patients, the need never slows in terms of those utilizing the center.

“I don’t see that getting any easier
,” she admitted. “We continue to have a major fundraiser once a year and continue to visit Washington D.C. to explain how desperately Indian Health Service’s budget is needed, not just for our agency but for IHS nationwide. The challenges, there’s no end.”

Despite having been at the IHCRC for more than four decades, she said she looked ahead to tackle one continued impediment, a lack of inpatient care services. Right now the clinic can only offer outpatient services, and if specialty care is required, they can only refer them to nearby tribal clinics.

“It’s been a great ride,” said Skeeter. “Our success is built on collaboration, and if I feel good about anything it’s that we have been able to work in conjunction with the tribes, the federal government, local government and agencies that meet needs that we can’t meet.”