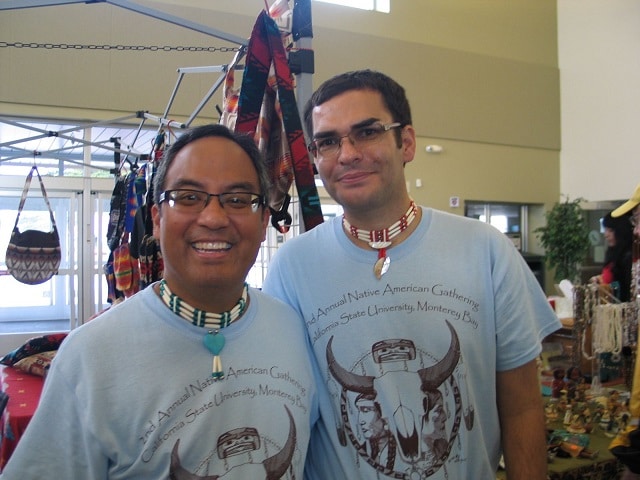 The event offered many different activities and included the presence of a Native American food vendor and more than 20 Native American craft vendors. Attendees could also engage in seven free craft-making workshops. There were 47 dancers for the dance contests with two visiting drums and the two host drums, the All Nations, a northern drum, and Southern Express. CSUMB Native faculty also provided a lecture and film screening of “Legacy of the Grandfather Flute” and a presentation on Native identity. There was also a staged reading of “4th Grade Mission Project,” a scene from IYA The Esselen Remember, a play telling the story of the Esselen tribe, indigenous people of Monterey County.

The University Center had ample space for attendees, dancers and workshop participants to experience Native culture and opportunities to meet others in quiet settings, and to become acquainted with members of other tribes, their histories and present-day conditions. The center ballroom echoed the drumming, songs and bells of dancers while reflecting the colorful regalia of many varieties. Most impressive were two grand entries led by the color guard, the Tule River Native Veterans Post 1987, which is the oldest, all-Native American color guard in the United States.

Asked why he decided to host the event at CSUMB, Neddeau replied, “We have a student body in which a small percentage identify themselves as Native American and consequently feel they are not part of the campus community. By bringing them together to experience Native culture with others, they learn about it, come to appreciate it, and gain a sense of community and self-worth otherwise lacking.”

The presence of multiple generations visible throughout the day showed how the event contributes to the commitment of Neddeau and the other organizers in respecting tribal traditions and the seven generations before and after our time.

Because there are 109 federally recognized tribes in California, the gathering’s focus was on no single tribe.

Elements of Potawatomi culture were incorporated in the preparation of the students for the event though.

“I told them about the Potawatomi traditions related to directions, the uses of sweet grass and tobacco, and the traditional aspects of Potawatomi etiquette to observe during the event,” explained Neddeau.

Ahead of the second grand entry, he pointed out features of his regalia with roots in the Potawatomi culture. Made by Potawatomi hands, it included a beaded belt symbolizing his Potawatomi name, Pnaswa. Accentuating his height, the first eagle feather given by the CPN aviary topped his headdress.

As a Potawatomi, attending the event was important for me because it provided an occasion to join with family and friends in a setting that reminded me of my tribal experiences as a child in Shawnee, Oklahoma. It also meant learning something about the California tribes. The dancing, drums, crafts, and regalia reminded us of our Potawatomi culture and its place among Native traditions.

The participation by college-age dancers and attendees throughout the day made for strong evidence that the purpose of holding the event at CSUMB was being fulfilled.