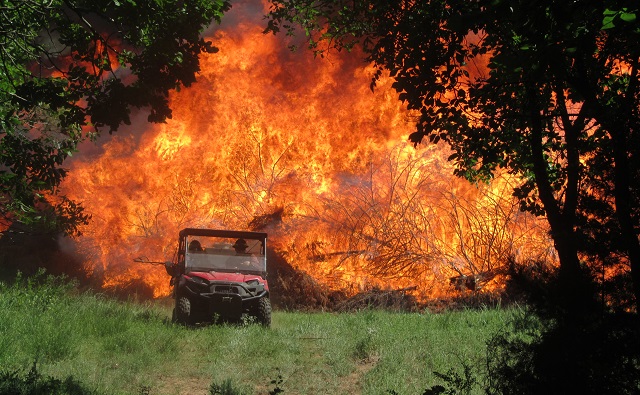 In Oklahoma, the epicenter of the Dust Bowl, the possibility of a drought never seems too far off. Though currently in a mild state of drought, policy makers at the local, state and tribal level have renewed their focuses on improving water conservation efforts before the water spouts run dry.

“When a parcel of land is allowed to return to its natural state, that is, not cultivated, hayed or grazed for the period of a year or more, red cedars sprout and grow aggressively,” explained CPN Realty Director Charles Meloy. “They do not provide food for any animals, domestic or wild; they are highly flammable; they consume large amounts of ground water; they crowd out other more useful plant species, trees or grasses because they grow very thick and will completely cover or shade the ground.”

Based on a current assessment, the CPN estimates up to 4,000 acres of trust land may currently require removal by manual means such as individuals cutting the trees down using chainsaws. Federal funding, available through the U.S. Bureau of Indian Affairs Invasive Wildlife Grant, will be dedicated to tools and man hours fighting invasive red cedar. An invasive wildlife specialist already on staff will assess and eradicate existing red cedar infestations on tribal land, while also working to prevent its reestablishment.

Said Meloy, “The grant funds will be utilized to purchase equipment, a skid steer with attachments, to cut and stack cedars for burns by the BIA Burn Teams. They will also fund the operator and provide supplies, fuel and maintenance for one year. After the grant funds are expended and the grant closed, the equipment will remain with CPN for use for continuing red cedar clearing.”

There have been rising concerns in Oklahoma about the spread of red cedar. The multiyear drought that ended in 2015 helped raise awareness of the need for water conservation. Red cedar’s spread was one issue identified by tribal, county and municipal governments.

At the height of a drought in 2013, the City of Shawnee identified the species as a threat to its dwindling water supplies near the Shawnee Twin Lakes area. Then-commissioner Linda Agee, whose ward included the lakes, pushed for an eradication program. The city has conducted its own eradication plan since then, but many of the trees that remain in its limits are on private property, leaving municipal workers no options in removing them.

CPN hopes that the example set by its program will address that problem in the areas in its tribal jurisdiction. Eradication of invasive cedar on CPN lands will both benefit the Nation by protecting and preserving both the cultural and enterprise values. It is hoped that as a result, the tribe will build relationships with regional landowners, who may use the CPN model for their own properties.