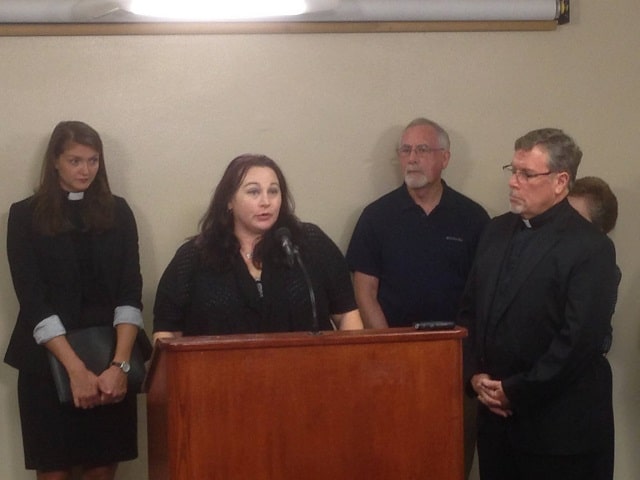 “This is a great first step for a legislative intervention but lacks the ability to enforce without proper reporting,” explained Pollard at the state capitol.

The gathering of representatives from non-profits like the Oklahoma Policy Institute, faith leaders like Catholic Charities of Oklahoma City, the Mayflower Congregational United Church of Christ and financial institutions like the CPCDC discussed new rules handed down by the Consumer Financial Protection Bureau on what are commonly known as “payday loan lenders.”

“Oklahomans are the number one user of payday loans per capita in the nation,” said Rev. Lori Walke of the Mayflower Congregational United Church of Christ. “In 2015 alone, payday lenders charged Oklahomans $52 million in fees. The average interest rate on these loans is 391 percent APR.”

Speaking to the Associated Press’ Sean Murphy, school teacher Elise Robillard described the situation she found herself in after taking out one of these loans in order to replace a set of balding tires on her car.

“I spent the better part of 15 years stuck in a cycle of debt because of the initial payday loan that I took out,” she said.

Pollard, whose organization serves Native Americans and employees of the Citizen Potawatomi Nation with credit counseling services, explained that loopholes in the federal rules established by the CFPB leave the system open to continual failure.

“With no overall tracking system by lenders, if you’re denied a loan at one lender, you can just walk to one next door who will give you one,” Pollard explained.

According to Pollard, at one time Oklahoma did have a tracking system, but it was eventually abandoned after complaints that it was too intrusive into customer’s financial history. While some have suggested implementing a tracking system with the three major credit bureaus, Pollard cautioned that might do more harm than good because many of those seeking these financial tools already have bruised credit scores.

DeVon Douglass of the Oklahoma Policy Institute shared the coalition’s enthusiasm for the CFPB’s direction, but said that Oklahoma legislators didn’t need to wait for the federal agency to act.

Citing the state’s motto of “Labor omnia vincit,” or “Labor Conquers All Things,” Douglas noted that “We stand with Oklahomans in our state who work. What we know about predatory loans is that they do not work for our state.”