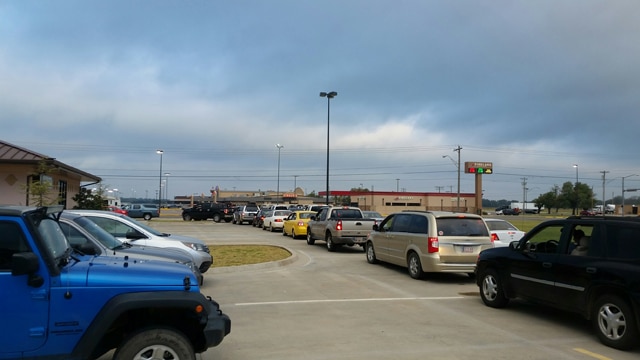 Those driving didn’t even have to get out of their vehicles to receive their vaccination. The event was scheduled to begin at 8 a.m., but the overwhelming response caused the workers to start earlier than expected.

“Saturday morning began at 6 a.m. in the clinic, filling syringes with the flu vaccine,” CPNHS Director of Nursing Amber Curtis, RN, said. “The plan was to start giving flu shots at 8 a.m. but the line of cars was so long I was afraid they would be backed up on Hardesty Road and cause traffic problems so we started at about 7:20 a.m.”

In addition to regular advertising, workers took posters to 20 local charitable organizations that assist the homeless population in the Shawnee-Tecumseh area. The goal was to provide the flu shot to people who couldn’t afford it, didn’t have access or needed a convenient place to get vaccinated.

Although the theme was “CPN and You Fight the Flu,” medical professionals and students from the around the community helped make the event possible.

“We worked in collaboration with the Pottawatomie County Health Department and six nursing students from Oklahoma Baptist University assisted us in the morning,” Curtis said.

CPN Health Service’s Kassi Roselius, MD, M.P.H., was on hand to answer any questions about the flu vaccine, along with Citizen Potawatomi Nation employees from other departments who helped with traffic control.

“The flu vaccine does not contain any live virus in the shot,” Dr. Roselius said when asked about the common myths about the vaccine. “Therefore, the flu shot cannot give you the flu. Each year a new vaccine is manufactured in hopes of protecting against three to four different viral strands. Symptoms may occur with the administration of the shot, such as sore muscles in the arm, fatigue, or low-grade fever; however, these symptoms should only last 24-48 hours.”

The October 15 drive, which was open to the public, followed on the heels of CPN’s internal employee flu vaccination drive which took place in the weeks prior.

“I can’t begin to tell you about all of the gratitude that was expressed. They were so thankful,” Curtis said. “It’s an honor to work for a place that values community as the Citizen Potawatomi Nation does.”