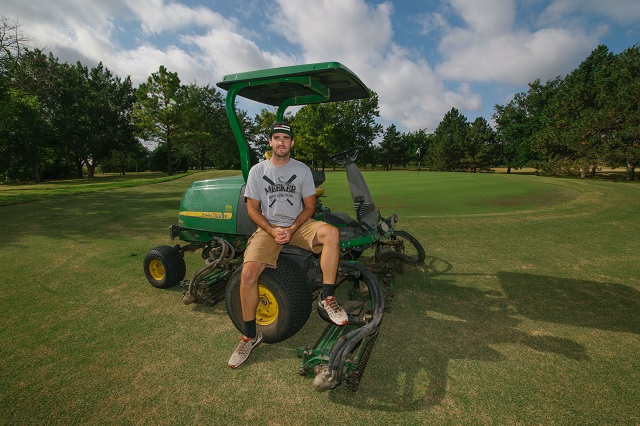 Employment opportunities at Citizen Potawatomi Nation tribal departments and commercial enterprises are extensive. With approximately 2,400 employees and more than 50 positions for part- and full-time positions open daily, there are ample opportunities for workers to get a foot in the door and work toward better positions.

One tribal member from Meeker, Oklahoma did just that recently after departing from the staff of FireLake Golf Course. Caleb Martin, a member of the Holloway family, graduated from Meeker High School in 2012 and like many young graduates, didn’t know for sure what he wanted to do. He said he’d considered being a personal trainer due to his love of sports as a youth. He took a job at FireLake Golf Course as a member of the staff where he helped with the course maintenance.

The arrival of current course superintendent Derron Day helped provide Martin some direction when it came to his future plans.

OSU-OKC has a five-hole golf course at its Oklahoma City campus as a training ground for students in the turf management and horticulture program.

“It pays hourly and tuition as long as you’re working and going to the school,” Martin explained.

He chose OSU-OKC on the recommendation of Day, specifically because Martin needed the experience of managing a course with bentgrass greens compared to what he already knew at FireLake, which has bermudagrass. Bentgrass greens are a cold weather grass, meaning their growing season runs from early September through May. They’re especially sensitive to heat, which can reach into the 100s during July and August in Oklahoma, and require constant hand watering, which Martin says takes up much of his time.

Despite only working in the golf course management field for a few years, Martin’s time at FireLake provided him a unique insight into the sector. When he began, he was mostly responsible for the day-to-day mowing, watering and other course maintenance issues. In the last year, though, he and other staff members have taken on the brunt of the work in first demolishing much of the original course and assistance in rebuilding the upgraded course amidst FireLake’s overhaul.

“I was there through everything on the renovation except for holes one and two, about 90 percent of it,” he said.

Martin said that once he graduates with his Associates Degree in Advanced Turf Management, he’ll likely pursue an assistant superintendent’s position at a larger golf course in order to gain experience after his time at FireLake and OSU-OKC.

“I’m my only employee,” joked Martin. “So I’d like to find something on the large scale of courses with a bigger budget and staff since I’ve already had the other two. Once that happens I’d like to do what Derron does and be a superintendent.”