Justin Neely, CPN’s director of language for 11 years, has been to every Potawatomi language conference since the early 2000s.

“I thought overall it went smoothly and we had a nice mixture of presentations,” Neely said. “We had classes for beginners and people who are a little more advanced, kids’ activities and hands-on classes. One lesson featured Kevin Finney making birch bark boxes using the language; in another, James Aquash talked about old songs. We also played the card game Old Maid in the language and Potawatomi bingo – or shishibe.” 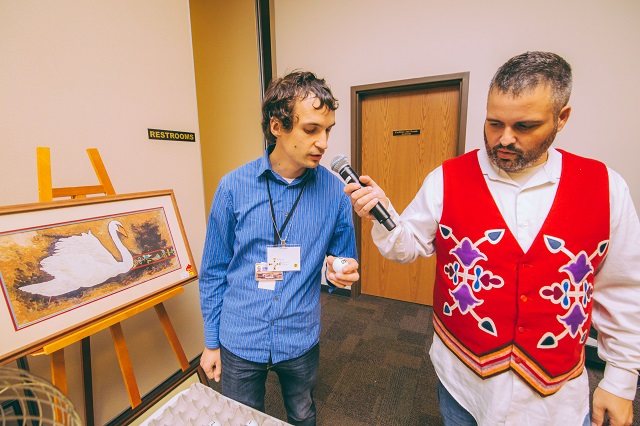 Several elders who grew up speaking the language were asked to present at the conference. Aquash was among them, mentioning that Potawatomi was the only language his grandmother, who raised him, had ever known. As he grew up, Aquash explained that he had lost his way in terms of becoming distanced from his Potawatomi heritage. Yet he found his way back to his culture by speaking the language.

“It’s a wonderful thing to get to meet people and speak the language together,” the Walpole Island First Nation Band member said. “I want to keep it a living language.”

“I looked at [Aquash’s] session from a social work perspective. I like to see how people cope with different hardships in their lives. It was neat to hear the speaker say that when you are sad you turn to what makes you feel like home and the Potawatomi language was home to him. It was a comfort and something he could use to build upon himself and get better.”

Wilson and Pokagon Band members took a bus to Oklahoma by way of the Trail of Death – the forced removal of the Potawatomi people from the Great Lakes in 1838. Marissa Adcock, a Pokagon Band member, meditated on those who lost their lives while stopping at landmarks honoring the trail.

“We drove through the Trail of Death and that was hard. I can’t imagine being forced to hike through it,” Adcock said. “I think the language conference is important to our tribe’s growth. We’re growing economically and in size as generations grow. It’s important that the language doesn’t die out because it is part of how we survived and everything our tribe had to go through to become a sovereign nation.”

Another fluent Potawatomi speaker, Jim Thunder of the Forest County Potawatomi Tribe presented with his students at the conference. They taught sentence structure using a humorous story about his uncle and a Model A Ford. He told the Hownikan that, with the help of the University of Wisconsin-Madison, his Potawatomi language teaching series will soon be available nationwide.

His student, Carla Collins of the Pokagon Band, is one of the first to partake in the language apprenticeship program. She moved 400 miles from home to Crandon, Wisconsin with her two children to participate in the program.

“It is a really good opportunity. A lot of people would love the chance to work with Jim because he is a wealth of knowledge,” Collins said. “Originally, I just wanted to learn how to speak Potawatomi and teach my kids, but now that I have realized the more you learn, the greater responsibility you have to teach more people. When I complete the program, I will move to the Pokagon Band and have a five-year contract with them.”

“I was really happy he was able to come down because people enjoy his presentations. He is a superior speaker,” Neely said. “I definitely learned a lot from Jim. Some of the first language tapes that I got were taught by Jim Thunder in 1998. My mother got them for me for Christmas.”

Near the end of the conference, the employees of the Nottawaseppi Huron Band’s Cultural Center honored their counterparts from the CPN Cultural Heritage Center, Kelli Mosteller Ph.D., Blake Norton and Neely for hosting a great language conference and assisting them in creating their own heritage center.

“In order for tribes to remain sovereign, language is the first essential step,” Nottawaseppi Huron member and employee Danielle Pfeifer said. “Our cultural department was born out of the revitalization of the language. It is the direct line to our Creator.”

“Our goal was to create a laid back environment where people felt comfortable learning the language and using it,” Neely said. “I hope tribal members realize that this is our language to make mistakes with, to learn, and not take too seriously. The most important thing is to use it in your day-to-day lives and teach your kids and grandkids.”

That is exactly what Rhonda Purcell – a member and language program coordinator at the Pokagon Band – does with her three children. In their home, she and her husband utilize their children’s Potawatomi names, commands, household items and everyday language in their native tongue.

“The survival of the language lies within the youth,” Purcell urges fellow Potawatomi. “If there is any way you can influence your child’s learning, please try to incorporate our language, even if it is just one word.”

The Pokagon Band encourages all Potawatomi to utilize its language app, which is available for free on iTunes to anyone nationwide. The Prairie and Forest County bands also have apps that are available on iTunes.