Each year, the students in the Potawatomi Leadership Program spend much of their six-week internship completing projects to benefit the tribe.

“It is an intentionally open-ended project,” said CPN Department of Education Director Tesia Zientek. “They are to come up with a project that impacts the tribe in some way. That’s all we tell them because we want them to be creative and use their gifts and interests to come up with something unique to them.”

The students presented their projects to CPN leadership, family and friends on July 27 in the tribal legislative chambers, which initiated discussion and brainstorming on how to implement these five plans.

“They’ve gone above and beyond what we expected of them this year, and I’m extremely proud,” Zientek said. 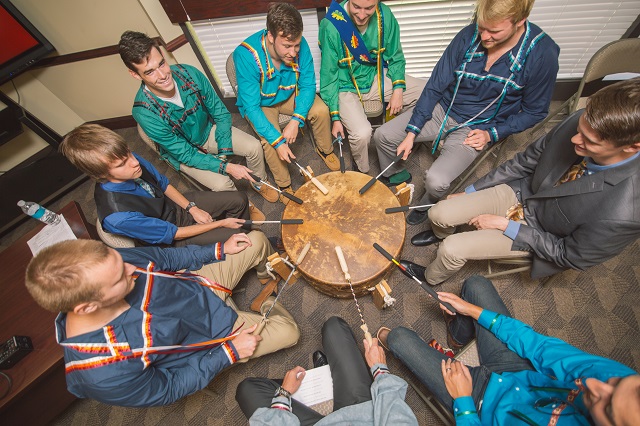 Randy Bazhaw and Matthew Clift chose to create a drum song called “Bodewadmi madmowen,” which means Potawatomi prayer, in the hopes of bringing the tribe together as a whole. This song can be sung in sweats, drum circles and other ceremonies as a prayer to the Creator.

“When we came up with the idea, we were sitting around the talking circle at the eagle aviary,” Clift said. “When we got into pairs, it just kind of hit me. This is what we are going to do. We are going to create a song. It was definitely spiritual and very clear.”

With help from the Squirrel Creek Drum Group and CPN Language Director Justin Neely, they created a song that can be passed down to generations. Bazhaw and Clift were prompted to choose this as a project because they couldn’t locate any Citizen Potawatomi-specific honor songs,and they saw that as a problem they could tackle.

“This process was culturally enlightening. We learned so much about the drum and our culture,” Bazhaw said. “Just knowing that in 70 years this song could be sung in many different settings is touching.”

Tom Brunt and Susannah Howard called upon their environmental studies backgrounds to create their project. The pair created a reusable bag program that promotes recycling at each of the CPN enterprises.

“We’ve noticed that we are producing a lot of plastic bags and there are no places to recycle them,” Howard said. “In our research, we found that others before us have had similar ideas, but customers don’t have the incentive to use reusable bags. So we’ve decided to add an incentive to the customer, which is five cents off of their purchase for each reusable bag used.”

Brunt and Howard designed a reusable bag that informs users of all of the enterprises CPN has. By promoting these enterprises, the goal is to create a way to offset the cost of the incentive by encouraging the users to shop at other tribal enterprises. They would also like to educate the community of how plastic bags impact the environment.

“To me, an added bonus of using a grant is the requirement of an educational component. Educating people is where the problem can really be solved,” Brunt said.

Aden Eilers and Aaron Stevenson worked on a plan for a 10-15-minute documentary about CPN’s growth from the 1970s to the present day. The duo created an outline, script and 1.5-minute teaser to showcase their work.

“We plan to distribute the documentary on the CPN website, YouTube and social media,” Stevenson said. “We can also show it at new-hire orientation because right now they have a documentary that shows the history of the tribe up to 1970.”

Governmental changes, growth of enterprises and trust land, and relevant federal laws will all be included. They will hand the project off to the public information department who will see the task to completion.

Alyssa Frey and Katherine Smith proposed a free two-day program for tribal youth to incorporate into the annual Family Reunion Festival called the Potawatomi Youth Program. The program will be an educational setting where children and teenagers can learn more about CPN’s culture and traditional teachings.

“The goals for the program are to get CPN young adults more involved in the culture, government and the history of the Potawatomi,” Smith said. “The program will join in the tribe’s effort to educate and encourage future leaders.”

The pair created a curriculum of cultural teachings, crafts and even designed workbooks for the PYP. They would like to gift the participants with regalia so they could join in dancing at Grand Entry. They suggested that former PLP would teach the classes, which would allow them to give back to youth and stay involved in the tribe.

“One of the reasons we wanted to create this program was to educate tribal youth,” Frey said. “Growing up, neither one of us really got a chance to learn about our culture or traditions very much. We both knew we were Potawatomi and that was the extent of it. So we want to give back what we learned in the PLP to kids so that they can grow up more immersed in our culture.”

Get to know your legislator

Zoe Gustason and Sage Hanson suggested a project to make it clear to the Potawatomi people who their legislators are and that they were accessible to get to know each tribal member in their region. To do this, they wanted to revamp the legislator’s page on the CPN website to add written biographies and on-camera interviews for each tribal legislator.

“I think most people have this idea that their regional representative doesn’t have much time to talk to them,” Hanson said. “But it’s different with the Potawatomi, I’ve noticed, because you don’t become a legislator unless you really want to bring people together as a community.”

They presented a mock interview with District 10 Legislator David Barrett, who answered the question “What does being Potawatomi mean to you?” They also suggested that these digital interviews can also be used to teach CPN members about the wisdom of their elders.

Each of the project presentations encouraged brainstorming from audience members who asked questions and suggested ways to make these plans possible to positively impact CPN.