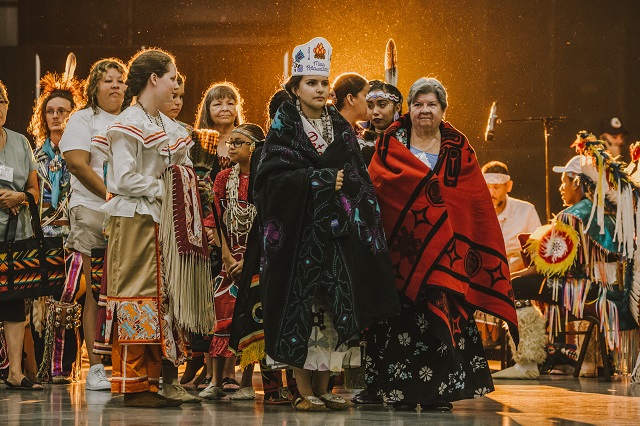 Four young women competed in the annual Miss Potawatomi Pageant during the 2016 Gathering of Potawatomi Nations in July. These ladies had to be 13-19 years of age and demonstrate their knowledge of the Potawatomi culture in order to compete.

Enedina Banks, who works in CPN’s language department, organized the pageant at the Gathering, which reminded her of holding a similar title.

“When I was a little girl – my daughter’s age – I won my school’s Indian Princess [title],” Banks said. “When I would go to powwows, my mother would remind me that I am representing my school and tribe while I’m holding this title. I would shake everyone’s hand and welcome them to the powwow. When a visitor would need assistance, I would volunteer.”

While the former Miss Potawatomi, Dania Wahwasuck of the Prairie Band, held the title during 2015-16, she hosted essay and coloring contests, volunteered at the elder center and did what she could to make the younger children look up to her, Banks told the Hownikan.

“Our criteria and expectations were important; these girls are role models,” Banks said. “I’m proud that we got to do it and that it was inclusive. Most bands participated in one way or another.”

Each contestant was to be confident, capable of communicating clearly and knowledgeable of tribal culture. Contestants filled out an application, which included essays answering why they want the ambassador title, who their role models are and how the Potawatomi culture has influenced their lives. For the pageant, each contestant was to introduce herself in the Potawatomi language, make a speech fewer than five minutes long and explain and perform her talent.

Anna Rhodd Brimm is a member of the Citizen Potawatomi Nation and attends Konawa High School in Konawa, Oklahoma. She is 15 years old and begins her sophomore year in high school in the fall. For her talent, she sang a traditional song in the Potawatomi language.

Mary Bush, from Shelbyville, Michigan, shared her talent of hoop dancing and storytelling. She is 14 years old and a member of the Match-EBe-Nash-She-Wish (Gun Lake) Tribe.

Paulina Davison is a CPN member and former PLP participant. Davison is 19 years old and a junior at Arizona State University. She sang the white eagle song and played the hand drum for her talent.

Sophia Suke, a member of the Prairie Band, attends Kickapoo Nation School and lives in Mayetta, Kansas. She is 14 years old and will be a freshman in the fall. She shared her beading talent with the judges, informing them that she also made much of her regalia.

Banks was pleased that the judges who were asked to evaluate the competitors took selecting the winner very seriously. Not only did they read the applications and judged the speeches and talent, but they also watched how the girls interacted at the Friday night powwow before crowning the winner on Saturday evening.

The judges were Noreena Meshigaud Dwyer, from the Hannahville Potawatomi Tribe, Linda George, from Walpole Island First Nation, and Melissa Forester and Danielle Pfeifer, from the Nottawaseppi Huron Band. None of the judges were members of the participants’ tribes.

“These girls go from community to community to represent all the bands of Potawatomi. The girls who run for this are serious about it. The contestants all presented themselves in a good way and it was very hard to judge them,” Banks said.

During crowning on Friday, July 29, it was announced that the judges chose Mary Bush to be Miss Potawatomi 2016-17. Bush, who is a member of the Eagle clan, has worked with her tribe to develop a tribal youth council and was selected to be the inaugural chairperson.

“I plan to dedicate my time as Miss Potawatomi to provide opportunities and a voice that is desperately needed,” Bush said. “I intend to participate in a variety of cultural events and with many national organizations to share this message.”