With approximately 141 children under their supervision, the staff of the Citizen Potawatomi Nation Indian Child Welfare Department must keep up to date records for each individual child they oversee. Keeping track of the extensive amounts of paperwork is vital to the department’s mission of monitoring the children and families in their charge. One tribal employee, Tyler Laudette, brings his own expertise from the military and professional sector to this work.

Laudette was born at Ft. Sill in Lawton, Oklahoma, the son of a career U.S. Army soldier. Though born in Oklahoma, the family traveled extensively while his father was stationed at installations across the globe. Upon his father’s retirement from the Army, the family returned to Oklahoma to live closer to his mother’s family, and Laudette graduated from Elgin High School in 1978. He followed in his father’s footsteps, serving in the U.S. Air Force after his high school graduation.

“I enjoyed traveling the world,” Laudette said. “After the service, I moved to Philadelphia and lived there for 27 years. I guess that makes me a Yankee, or so I’ve been told.” 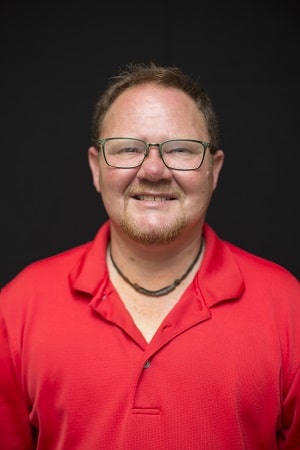 In Philadelphia, Laudette worked as a paralegal and legal assistant in various specialties of the legal field, serving executive level lawyers. In his work, he also handled human relations duties, overseeing the recruitment and retention of staff at the firms he was employed at. Though the paralegal duties were strenuous, Laudette also became a full-time student, earning both a bachelor’s of science and a master’s of business administration from the University of Phoenix.

After nearly three decades in the City of Brotherly Love, Laudette began looking for avenues to bring him back to Oklahoma. In 2013, he made the move, in large part to be closer to his 93-year-old father. While highly qualified and possessing a wealth of professional experience, Laudette still beat the pavement – in 21st century terms – in search of employment opportunities in Oklahoma.

“I stumbled onto CPN’s website and saw the posting for a file and scanner clerk,” he recalled. “I applied for the position and was subsequently hired by Janet Draper, our fearless leader in Indian Child Welfare. I intended this to be a temporary job while I continued to seek something different – something challenging and rewarding. I had no idea what was about to happen.”

Like many departments in government and commercial offices, ICW staff have spent the past several years transitioning their once cumbersome and space consuming physical records into digital formats. Laudette’s experience with similar challenges in his previous work as a paralegal has been a boon for the ICW Department in this regard.

As he explained about his mission, “I spoke with the case managers about their needs, what they would like to see happen moving forward, and showed them how the files could be adapted to accommodate the varying levels of ICW involvement. Utilizing my MBA I’ve streamlined much of the documents we use which makes the user more efficient and productive.”

“Tyler has a great background and it helps a lot in ICW case work especially legal forms and understanding state law,” said ICW Director Janet Draper. “Coming into tribal jurisdiction can be confusing but Tyler is adjusting remarkably well.”

As Laudette admits, sorting and organizing stacks of paperwork can appear “mundane” on its face. However, the lives and cases contained in these papers are vitally important to families who fall under ICW’s jurisdiction, as well as the staff members responsible for monitoring them.

“Once you’re on this side of things, what I do matters because it provides the case managers and others with needed information at the touch of a button. One of the duties of this position is to track data – incoming calls, court appearances, number of cases in our tribal court, the State of Oklahoma, and those in other states. The information I track is used to assist in preparing grants – everything from the number of calls to the types of cases, to number of children affected, and we all work very hard to ensure that every eligible child becomes an enrolled member of the tribe.”

It isn’t always paperwork though. With a small but dedicated staff, the CPN ICW Department operates with an “all hands on deck” mentality, meaning even someone with a title scanner clerk may serve as a case manager when needed.

“Those experiences gave me new respect for case managers everywhere and getting to help social workers understand the Indian Child Welfare Act and how it should be implemented to achieve successful outcomes brought its own degree of reward and satisfaction, and something I thoroughly enjoyed doing.”

More than two years after initially joining the department, Laudette says that he is happy to see where ICW has come in terms of its record keeping and organization processes.

“Having to go through stacks and stacks of unorganized papers looking for a document is now a thing of the past here in ICW. Considering where this department was just two years ago and having a vision for where we go regarding data management is an exciting journey to think about,” he said.

Laudette’s move to Oklahoma has panned out in terms of his satisfaction with his work for CPN’s ICW Department, whose work is both challenging but also incredibly important.

“Being a part of this tribe and especially this department has given me a sense of pride I’ve never felt in any other job. It may sound cliché, but I really am proud to be an employee of the Citizen Potawatomi Nation Indian Child Welfare Department.”