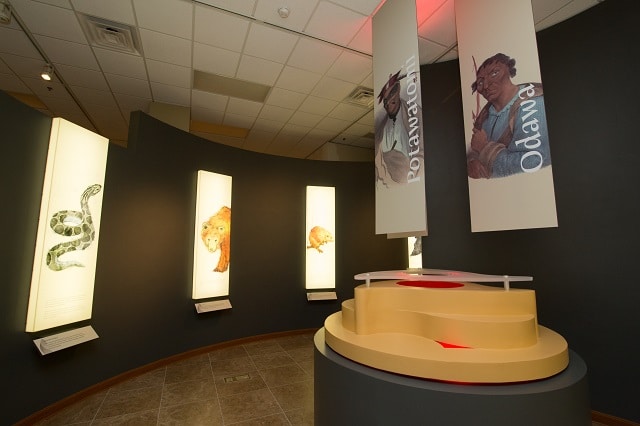 More than two years after a broken City of Shawnee water pipe dumped thousands of gallons of water into the CPN Cultural Heritage Center, the new exhibits are coming together. Many of the visitors who came to Festival and Gathering were able to see the progress while enjoying music, eagle demonstrations, cultural classes and the Citizen Potawatomi Gift Shop.

With the help of Atlas Fine Art Services, a Washington-based exhibit design firm, CHC staff came up with new approaches to tell the history and culture of the Potawatomi. Before constructing the museum exhibit, a plan had to be formulated, including big decisions like the narrative and layout to seemingly small details like fonts and colors. Staff focused on what kind of impressions they wanted visitors to leave with and which feelings the exhibits should evoke.

“Working with an exhibit design firm is a new experience for me and Blake Norton, our curator and archivist,” CHC Director Kelli Mosteller, Ph.D., said. “In the past, we’ve done the exhibits by ourselves, which is a lot of work to try to make an idea a finished product on the museum floor. It took us almost three years to get half of the museum finished prior to the flood.”

Comanche Nation tribal member Scott Jones is the owner and operator of Atlas. Jones has lived in Oklahoma and received his Bachelor of Fine Arts from the University of Oklahoma. He and his wife are both tribal members who received training at the Museum of Indian Arts and Culture.

“Native American museums operate on more of a heartfelt level so that when we need to talk about something that is culturally sensitive, they know they have our full attention and we won’t take any shortcuts,” Jones said. “Their needs come first and the culture’s needs come first.”

Jones and Norton explained the vision of the new exhibits to the Hownikan and shared what will be coming in the next year as the project moves into its final stages.

As the introduction to the overall past of the Potawatomi, the first section boasts a spiral design with a structure in the middle. The idea was to start in a central point when the three nations – the Potawatomi, Ojibwe and Ottawa – were spoken of as one, moving outward towards the second gallery.

The first section also features the Seven Fires Prophecy, explaining the origin of the tribe, mass migrations, historical context, hardships and benefits of western contact, loss of cultural ways and the seventh prophecy which tells of how a new people emerge and retrace the steps of elders to regain the cultural ways. This section is the basis for the rest of the exhibit, which will lead chronologically through Potawatomi history and end with the section “CPN Now.”

Festival goers also got the earliest look at the first five cases of the veteran memorial exhibit lining the outer wall of the long room. These cases featured traditional items carried by Potawatomi warriors in the pre-European and early European contact eras. The latter’s display also shows the introduction of items like new weaponry, acculturation in warfare, the Northwest Indian War – also known as Little Turtle’s War – and the War of 1812.

The heritage center staff hopes to complete construction of the museum by June 2017. To learn more and keep up to date with the progress, please visit www.potawatomiheritage.org and “Citizen Potawatomi Nation’s Cultural Heritage Center” on Facebook.