Spring in Oklahoma can certainly live up to the old saying that it comes in like a lion. However, we were fortunate that most major storms seemed to pass by the aviary or dissipate before they arrived. This spring rain, unlike last year’s record breaking rainfall, was just barely above average and was spread out enough so that we did not flood here. Last spring we missed out on seeing so much of the beauty that is spring, but not this year. This has been a productive season for the wildlife that surrounds the aviary.

Young great-horned owls have already fledged and are a regular sight each evening as they hunt in the open pasture. If they aren’t seen, they are always heard as they screech loudly, following their parents and begging for food every chance they get. One young red-shouldered hawk routinely visits to chase frogs where the water puddles after the rain.

On warmer days he bathes in the puddle. The hen turkeys have finally started to bring their young out into the pasture. They have discovered the community garden and often, during the heat of the day, can be seen wandering through the rows where the garden soil is moist and cool. It also contains the added bonus of plenty of bugs to hunt. We have even seen young fawns hidden in tall grass of the pasture. Generally around midday, the doe will emerge from the tree line and disappear into the grass and bring her fawn out to nurse before disappearing to hide the fawn again. We have been so blessed that spring has been kind to us here at the aviary and as the first day of summer quickly approaches, we hope summer will be just as kind. 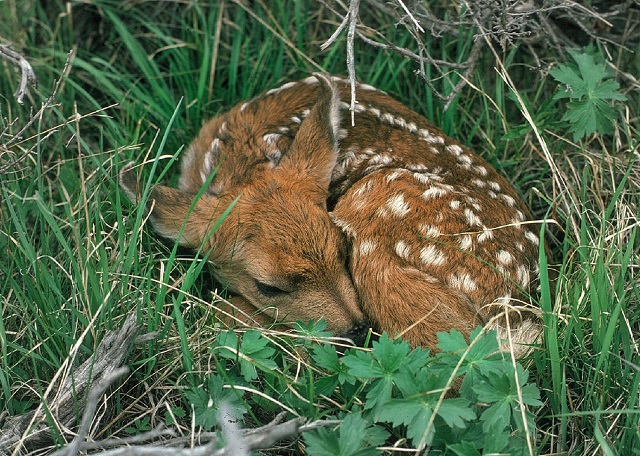 One thing we have yet to see this spring though is Wadasé Zhabwé. However, we are able to see her movements as we follow her telemetry because, against all odds, she is still wearing her GPS backpack. Since the second week in February she has stayed just 15 miles northwest of the Quapaw Creek Reservoirs. In total, 38 flood control dams were constructed in Lincoln County in the 98,000 acre watershed. Two large reservoirs were created for municipal water supplies and recreational areas while the rest are much smaller; together they create nearly 500 acres of wetlands.

One thing we know for sure is that wetland areas are full of wildlife and food for bald eagles. After her last visit to the aviary on February 9, Wadasé stopped at one of the reservoirs just north of HWY 62. She seems to have made several of those reservoirs in that area her ‘home base’ for the time being. She has made multiple trips back to her old familiar places along the North Canadian River near Harrah and McLoud, but after a two or three day fly about, she returns to the reservoirs.

We have also made several trips to the Quapaw Creek Reservoir area to look for her but all we have seen was several miles of Oklahoma back roads that we hadn’t traveled before. Once again Wadasé has chosen an area that has limited access from the public. Most of these reservoirs are on large tracts of land used for grazing cattle or farming. After talking with several landowners in the area, we learned that many are stocked with fish as well. This is the first time that she has spent an extended period of time off the river. The reservoirs she visited that we were able to access are small and were referred to as ponds by the landowners. Perhaps she has chosen the area because of the food source and there is very little human interaction or because it is central to some of her favorite hangouts.

It is hard to know for sure, but what we do know is that the area is lush and green this time of year and that ensures she has food and cover. The movement recorded by the telemetry is always reassuring though. Once again after this year’s young migratory bald eagles fledged and left for their summer territories, Wadasé stayed. I think we can safely say that she is going to continue to stay in Oklahoma.

When this summer comes to an end Wadasé should choose a mate and with some luck we will still have telemetry to find the site they choose for nesting. Of course, we hope that she would bring any potential suitors home to visit and survey the real estate here again before choosing a nest site. In any event, we are confident that she has mastered the skills she needs to thrive in the wild and will be able to pass that on to her future generations.

As always we encourage you to keep your eyes out for Wadasé if you are near the areas she frequents. If she sticks to her routine, she should come home to visit soon. For more information about the CPN Eagle Aviary or to read previous Wadasé updates visit cpn.news/eaglevisions. Send your encounters with Wadasé or any other eagles in Oklahoma or wherever you may be to us at aviary@potawatomi.org.