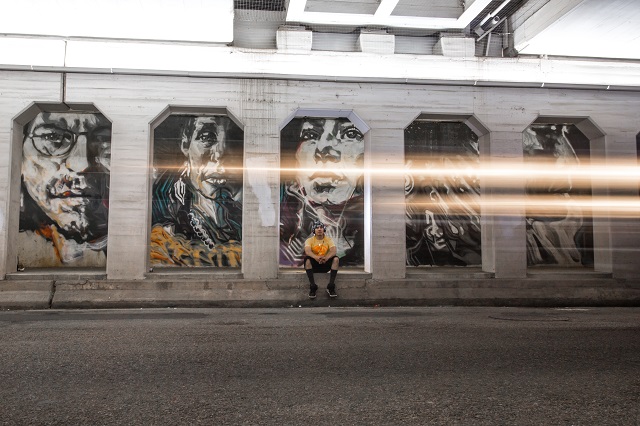 Although it ranks fourth highest in population of Native Americans, Native American cultures and art isn’t quite as noticeable in Oklahoma City as places like Albuquerque and Phoenix. Local artist Steven Grounds is hoping to change that and he’s starting with a mural in the heart of downtown.

“I saw the portraits of Native Americans on his Instagram and reached out to collaborate with Bo,” said Grounds. “I pull photos from his website and recreate them, which is how I chose four of the five portraits I’m incorporating to the mural in downtown Oklahoma City.”

The four portraits in the mural are of current tribal director of employment and training, Carol Clay-Levi, and former employee Stacy Coon. Two tribal members, Paige Lechtenberg and Cassidy Grace Holland, were also part of the mural.

Nicole Hatfield collaborated with Grounds on the project and the duo titled their project “Strength of the Woman.” The title comes from the poem “See the Woman,” by Native American activist John Trudell.

The entire mural consists of Hatfield’s paintings of women from the past on one end and Ground’s artwork based on the portraits and a tribute to John Trudell at the other. The two combined their artistic styles in the middle, where the portrait of Clay-Levi is.

Since moving back to Oklahoma, Grounds has had the goal of bringing his art to the busy downtown Oklahoma City tourism center.

“It’s been one of my goals to do something like this since I got back from Phoenix and it being downtown gave me the opportunity to showcase my work to a large audience,” said Grounds. “When I paint, I want it to be an experience for the viewer. I want them to take from me something on a spiritual level when I paint.”

The project is funded by the Chickasaw Nation and Downtown Oklahoma City Inc.

The mural will stay up for the next 10 years. To see the work in person, visit the underpass off of E. Sheridan Avenue near Chesapeake Energy Arena and N. E. K. Gaylord Boulevard in Oklahoma City.