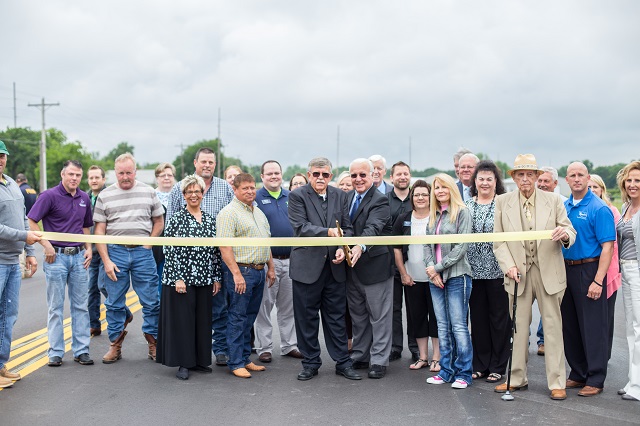 Drivers heading down one of Pottawatomie County’s major thoroughfares will no longer have to worry about pothole and construction slowdowns after a successful tribal-state-local partnership to widen South Gordon Cooper Drive on the northern side of Tecumseh.

Tribal Chairman John “Rocky” Barrett, Tecumseh Mayor Eddy Parker, Pottawatomie County commissioners and the Oklahoma Department of Transportation’s Dan Overland joined with members of the Tecumseh Chamber of Commerce to cut the ribbon on the project’s official opening. The road is now four lanes through the CPN jurisdiction between the towns of Shawnee and Tecumseh.

“This is a big day for us, we’ve been anticipating this for a long time and the Citizen Potawatomi Nation is proud to be a part of it,” said Chairman Barrett.

The tribe donated $500,000 to the project, while the Pottawatomie County Commission donated $250,000. Federal highway funds covered 80 percent of the construction costs.

ODOT’s Dan Overland was effusive of the collaboration between the various governments that partnered on the project.

“The city, the county, the State of Oklahoma, the Citizen Potawatomi Nation, it couldn’t have gotten done without it…the cooperation was wonderful. It has become a model for the State of Oklahoma for a partnership with all the municipalities, the state and the tribes to work together,” he said.

“This is not a project that we did on our own, it was with a lot of effort, and we very much appreciate CPN participating,” said Mayor Parker.

Looking over the completed four lane road, which has widened Gordon Cooper Drive between Bob Crouch Drive and Benson Park Road; Chairman Barrett expressed his enthusiasm for the project’s final product as well as its rapid completion. He noted that the construction and opening all took place within a year. As noted in the CountyWide and Sun newspaper, work on the project began on August 24, 2015, but the road remained open to traffic for the nearly nine months of work.

“It’s an extremely good looking project. We think it is going to be a tremendous boom to commerce and the expansion of the business corridor in the city of Tecumseh,” said Chairman Barrett.