Powwow the highlight of Festival for many Potawatomi

Often seen as the penultimate event of the CPN Family Reunion Festival, the Citizen Potawatomi Powwow draws participants and audience members alike to the dance arena after a long two days of activities. Though it may appear free flowing for a first time viewer, the dances and structure of the event builds on hundreds of years of traditions for Native American ceremonial celebrations. All Citizen Potawatomi are invited to join in the dances, whether they are stepping into Grand Entry as an honored family member or competing cash prizes in the powwow.

Before one considers entering the powwow arena however, the most important thing to take note of is attire. In Native American culture, powwow arenas are sacred, like a church or temple. While one would not typically enter such a sanctuary in casual dress like flip flops or tank tops, nor should they enter the dance arena during ceremonies unless dressed in formal Potawatomi attire, which is also known as regalia. 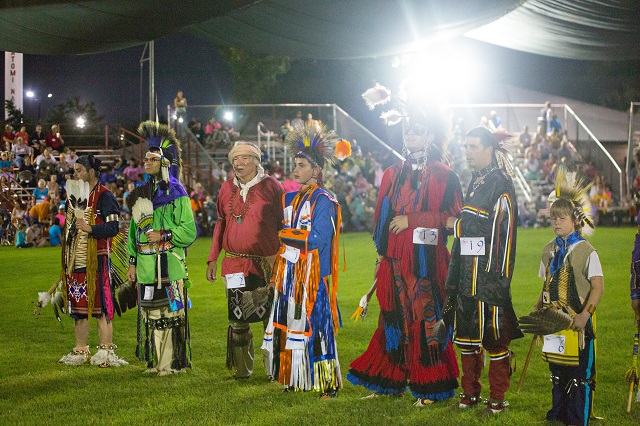 That attire can be simple. For men, all one needs is a ribbon shirt and slacks. For women, a shawl or a dress is considered respectful attire to don during a ceremonial event like the powwow or Grand Entry.

While no one disputes the importance of man’s best friend, dogs are not allowed in the powwow arena at any time. Just as one wouldn’t bring a family pet to a church service, nor should they allow their animals to run free during the Family Reunion Festival. It is also important to keep track of the children to make sure they do not stray out into the arena during ceremonial dances.

As CPN Arena Director Coby Lehman noted, these are some of the biggest challenges each year during Festival.

“This powwow arena, we treat this place as a sacred area and not as a playground. This is a place where we respect ourselves, our friends and our ancestors,” he said.

Following the annual general council meeting on Saturday afternoon, the beats of a drum can often be heard emanating from the powwow arena. Though many confuse this with the start of the powwow, it is actually the beginning of the gourd dance, which is open to military veterans and those wishing to dance in their honor.

“A lot of these dances have spiritual meanings, for instance the jingle dance where female participants have bells attached to their dresses, it is a healing dance,” explained Lehman.

The origins of the dance, like the Potawatomi, began in the Great Lakes region where an Ojibwe man’s granddaughter was sick. He had a dream about the dance, and held one in her honor, attaching bells to her regalia. Before the dance began, she could not stand, and by the end she was an active participant. Often times, when someone is wearing a jingle dress, it signifies their hope to heal or honor someone close to them.

Female participants can also dance northern traditional style, which in places like Oklahoma has a slower drum beat. Dancers wear a shawl during the dance, which is swung in time with the beat.

Men’s traditional is the most common dance seen at the Citizen Potawatomi Festival. It is notable for its double step technique, where dancers take two small steps with each foot. The significance of this particular style is meant to honor the initial steps of the first man, who like all young ones taking their own first walk, stumbled before getting it right.

Dancers participating in the competitive divisions on the Saturday night powwow have the opportunity to win cash prizes. To learn more about powwow dancing, arena etiquette and other cultural activities taking place at Festival, please visit http://cpn.news/festivalprep.