Way Back Wednesday: CPN and the OTC go to the U.S. Supreme Court

In the wake of last week’s decision by an arbitrator against the State of Oklahoma‘s attempts to collect state and local sales taxes on non-tribal members purchasing goods and services on tribal trust land, this Way Back Wednesday seemed like an excellent opportunity to show how the Citizen Potawatomi Nation has been down this road before.

In the January 1990 edition of the tribal newspaper, an article detailed the state government’s attempt to collect state sales taxes on cigarettes sold to non-Indians at tribal enterprises operating on trust land.

The case went all the way to the U.S. Supreme Court before being settled, but the closing statement of then (and current) Tribal Chairman John “Rocky” Barrett in the Hownikan article remains relevant today.

“In spite of directives from Oklahoma Attorney General Robert Henry and specific legislation in the Oklahoma legislature relating to tribal exemption from state regulation, the Oklahoma Tax Commission persists in its harassment and venal attempts to subvert social objectives of the tribe and our ability to finance them…The Potawatomi Tribe will prevail because persistence and determination have been a part of our history.” 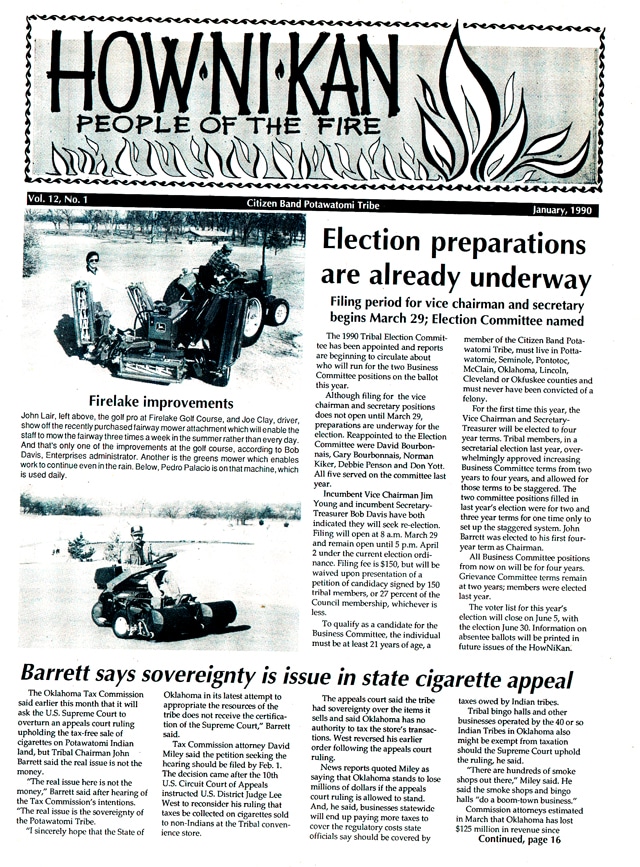