With a projected budget shortfall of more than $1 billion dollars, services funded through state tax revenues have faced steep cutbacks. Education has born its share of the cuts, with some large school districts across Oklahoma considering a four day school week and emergency certifications being used to fill more than 1,000 vacant teaching positions.

One small, yet significant voice that is often left out of such discussions is students. Yet under State Superintendent of Public Education Joy Hofmeister, one small group of high achieving students is able to express their views on the issues facing the classroom.

CPN member Trae Trousdale of Tecumseh High School is a member of the superintendent’s student advisory council. He spoke with the Hownikan on his experience with the group and his views as a student on how the current fiscal situation is impacting classrooms. 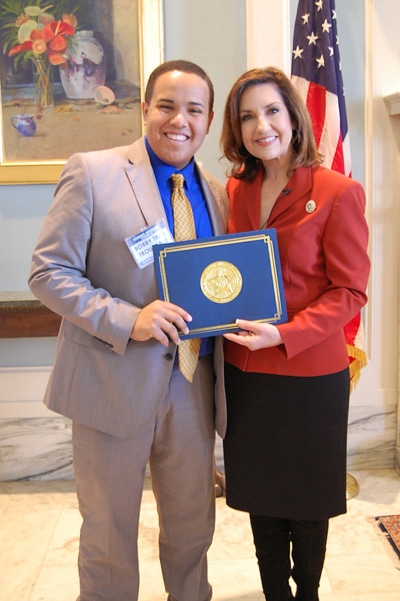 How did you get involved with the superintendent’s student advisory council program?

“God has blessed my life in many ways. I have been raised by my loving and compassionate grandparents Cherie and Bob Trousdale, and my hardworking single mother, B.J. Trousdale. I have also been supported and encouraged by my father, James Tobler. They have all instilled in me the value of hard work, confidence, and humility.

“During this past semester, I was approached by my guidance counselor and encouraged to apply for State Superintendent Hofmeister’s Student Advisory Council. I didn’t think too much about it, but submitted my application to Mr. Tom Wilsie, the Tecumseh Public Schools Superintendent. A few weeks later, I received an email, and was informed that I had been selected!”

Why did you decide to apply for and participate in the program?

“Although many would not consider what I do to be fun, it is how I have my fun. I enjoy volunteering, and starting community projects with my friends. I believe that in order for us to secure the future of our tribe, and even our nation, that it is vital for citizens and students to get involved. I believe that I am just performing my civic duties.”

You’re participating in the midst of a very tough time in Oklahoma education as the schools face  budget cuts and teacher shortages. What do you think about it?

“We discussed many issues facing Oklahoma teachers and students. The most disconcerting issues were budget cuts, the state’s ability to employ and retain the best teachers and even the state mandated testing placed on students. Ideas were shared concerning increasing the private sector support of public education, where all districts could withstand the budget cuts without affecting students dramatically. We even shared different opinions on how to attract and retain teachers.

“Just within my group of nine there were ideas about eliminating testing all together, limiting testing to smaller tests that track progression but do not reflect on the teacher’s qualification and teaching students to focus only on the ACT instead of the state mandated test.

“Superintendent Hofmeister assured us that her office is exploring many options to address these issues, and I think that she truly does care about the people in the classroom. However, I believe Oklahoma needs public education reform. The state needs to re-evaluate the amount that is allocated to teachers, and renew Oklahoma’s commitment to its teachers and students. I believe that to achieve a competitive level of public education that many underperforming schools and some administrators must consider the idea of consolidation.

“I also believe that the state should change the formula used to fund school districts to be based on the number of students enrolled, versus the current funding formula that is based on taxes and other money from the  businesses within a school district’s boundaries.

“In order to alleviate teachers’ stress; parents, guardians, and community members need to start taking an active role in student’s academics. Many parents have taken a back seat in their child’s education. They rely on the schools to provide not only teachers whom educate, but also rely on them to raise their children to become contributing members of society, on top of the heavy burdens of class size, constant evaluation and low-pay. Parents need to step up, become active in their students’ education and activities, teach their children valuable
life lessons, and put a halt to the ongoing deterioration of the family unit. To achieve some of these goals would be a tough pill to swallow for many, but with the state’s continued budget shortfalls I believe that we need to become aggressive and attack these issues head on now, rather than scramble and have to make more drastic cuts in the future.”

Even though you’re only a junior, do you have plans for after high school?

“After completing my college education I hope to return to Oklahoma where I would like to serve as a tribal legislator, a state legislator, and be elected to the national legislature. After I serve my state and tribe, I hope to be elected and serve as the first Native American President of the United States.”