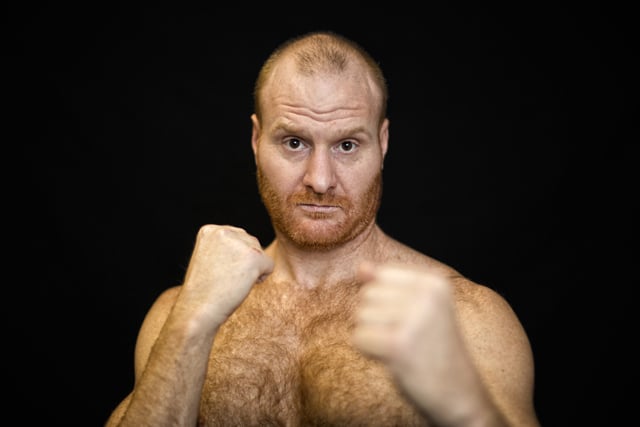 Three minutes of exercise doesn’t sound like a long time, but when factoring in an “exercise partner” who is trying to inflict physical pain and damage on you, that perspective changes. Jeremy Gregson only trained for  two months before his first ever fight and is the first tribal member to do so at FireLake Arena.

He spoke with the Hownikan about his match at FireLake Arena and  what it’s like to compete in front of hundreds of spectators.

How did you get into boxing?

“It was Aug. 2015 when I made the decision to try my hand at boxing. I weighed 204 pounds so I started to cut weight, train and do cardio to get to 185 pounds for my first fight. For the first month I didn’t even box and only started to spar with boxing gloves about two months into my training.

“I played baseball my whole life and then became a personal trainer for 18 years, which had a lot to do with my getting into boxing. I used to train with a professional boxer and was aware of what went into it. It’s something that I’ve always wanted to do, but I never actually stepped into the ring.”

Why boxing and not MMA?

“If you talk to people in both sports, the hype has died down quite a bit in MMA and boxing is making a bit of a comeback. There are some big names on Showtime and HBO and some great local fighters are making names for themselves.

“For me I will always stick with boxing because I had a leg injury from a car accident back in 2002 that will keep me from competing in anything that has to do with wrestling and grappling.

“With my injury it makes it hard  enough in the boxing ring. I had some nerve damage in my right ankle so it rolls continuously. It makes conventional boxing training difficult because I’m limited in what I can do, so I have to find alternate exercises like jump roping and running. It’s not something that I let hold me back though.”

How did the fight go in your opinion?

“Of course I had the fight planned out how I wanted it to go in my head. I wanted to get a couple amateur fights under my belt before I stepped into the ring professionally or at least a pro fight before I fought at the arena. “This is my backyard so to speak. I grew up in Shawnee, went to school at Dale, went to college at East Central, I’m a tribal member, I work at the arena so I knew was going to have a lot people here to see me and that’s something that added pressure to my first ever fight. It was a four round decision, but I didn’t get knocked out, which was the absolute last thing that I wanted to happen.

“To say the least, I’m not happy with how it went. I’m not going to complain about it. I took a fight with a guy who was 20 pounds heavier than me and by fight time, he was 30 pounds heavier. I took a lot away from the fight and know the stuff that I need to work on. Hopefully with what I’m taking from this fight and some training,
I’ll be able to showcase boxing that I’ve learned into my next fight.”

From the fight footage it looks as if he would come in with several punches and then clinch. Do you think this is what his corner planned?

“He would come in with a right hook or straight jab and we’d lock up. I didn’t realize how bad it was until I saw the footage and the referee breaking us apart and telling us not to grab. Talking to him and his camp, they knew he was lot heavier than me and could throw his weight around. With that, I didn’t want to spend all of my energy trying to break free so my game plan was to have the referee separate us.”

You were expecting to fight someone else. What happened?

“When I initially started this I knew I didn’t want to fight heavyweight because it’s 200 pounds and above. You can be fighting guys 30 to 40 pounds heavier than you. My trainer and I decided to fight at Cruiserweight at 185 pounds. Approximately 10 days before the fight I got the word that my opponent tore his rotator cuff. With this being my first fight, we didn’t want to get someone in there with a more substantial amount of experience than me so they gave me several options to choose who to fight.

“I ended up choosing Lucas Queen, but I didn’t know that he was 40 pounds heavier than me at the time. We  were supposed to meet at 200 pounds and I felt strong at 190 so when I got to the weigh-in Queen had  messaged the promoter explaining that there wouldn’t be any way he could get down to 200. Queen was at 207  and asked if I would still take the fight. At weigh-ins he came in at 210 pounds. If I didn’t take it, my family and friends who bought tickets wouldn’t see the fight and no one would have been paid; so I took the fight. I took a lot away from it, but I’m not upset about it. It was my first time in the ring and there are quite a few positives I  can take away from it.”

What’s your motivation to fight at such a late age?

“One of the main reasons why I did this was to inspire my wife and kids. I coach baseball and basketball, and quite a few of the kids I coach were there to see my fight. If I could inspire just one of them or even someone who thinks they’re too old to do this, then that is a victory for me. Once my wife or my body says ‘stop’, then I will. In the meantime, I’m looking forward to that feeling when I stepped into the ring for the first time.”

Those interested in watching Jeremy’s first fight can see it on HD Boxing’s YouTube page at cpn.news/jgfight.