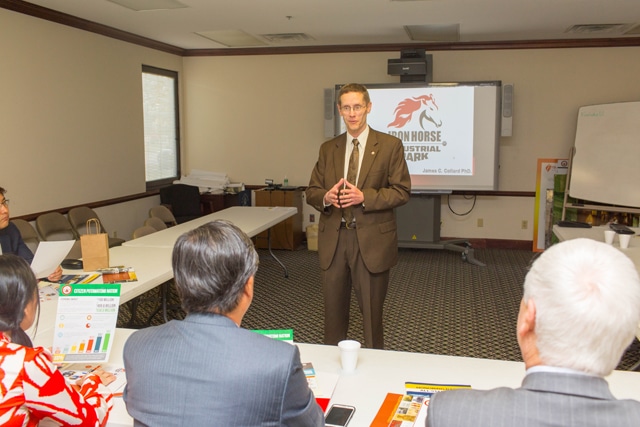 Work on Iron Horse Industrial Park continues to move forward, raising the potential for the long-planned Citizen Potawatomi Nation project to connect Pottawatomie County with global markets. Following a recent rail agreement between the tribe and the Arkansas-Oklahoma Railroad, track will soon be laid inside the industrial park.

Explained Tribal Economic Development Director James Collard, Ph.D., “This is an exciting time for everyone involved, from those who have worked to make the park reality to potential clients who may one day do business inside Iron Horse.”

Iron Horse is a general-use industrial park located on the national rail network of the United States. Its central location on 400 acres of Native American trust land just 35 minutes southeast of Oklahoma City and direct connections to the Union Pacific Rail Road provides great potential for importers and exporters alike.  The agreement to put track throughout the park was signed off at the end of 2015. In spring 2016 visits from potential clients wanting to do business in Indian Country will be scheduled at a rapid pace. Through the use of the federal HEARTH Act and the park’s designation as a foreign-trade zone satellite site, Iron Horse has the potential to become one of the drivers of economic development and jobs in Pottawatomie County in the coming years.

The project’s progress has picked up speed since the Aug. 2013 completion of the Iron Horse Bridge, which
spans the North Canadian River just more than a mile southeast of Shawnee, Oklahoma. The effort of A-OK railroad at reopening the Iron Horse Bridge and the rail links connecting southeastern Oklahoma more than thirty years after it was severed is a prime example of a project that is more than just a rail line.

In Feb. 2014, Iron Horse received permission of having its designation as a foreign-trade zone. Designated a magnet site of the Port of Oklahoma City’s foreign-trade zone, Iron Horse’s status and location will provide incentives for new manufacturing and distribution facilities.

As OKC Port Authority Chairman Craig Knutson noted at the time of the designation, “The Citizen Potawatomi Nation has been increasingly proactive on working to make the industrial park a foreign trade-zone, based off the understanding that it will become a major marketing tool for bringing business to the tribe. This not only strengthens the Citizen Potawatomi Nation, but will provide millions in economic growth in the area.”

The park’s success is in large part due to successful public-private partnerships between local Oklahoma businesses like A-OK Railroad and governmental entities like the Citizen Potawatomi Nation and the U.S. Department of Commerce. Two grants, totaling $2.2 million available through the U.S. Department of  Commerce, Economic Development Administration will provide in additional funding during the park’s opening stages.

“This spring we will be laying approximately 7,000 feet of rail to run inside the park. That is not a minor expense. Without the grant support from the U.S. Department of Commerce, this would not have happened,” said Collard.

To learn more about Iron Horse Industrial Park, please visit www.Iron-HorseCPN.com or contact the CPN Office of Economic Development at 405-275-3121.