For the past 20 years, environmental organizations have fought to keep the Monarch butterfly from going extinct. The iconic butterfly has experienced a significant population loss, mainly due to pesticide use on
genetically engineered crops. Pesticides kill milkweed, which is the Monarch’s main source of food and shelter.

For some Native American tribes, butterflies symbolize joy through dancing and are considered a traditional symbol for indigenous people. This spring, CPN communitygarden organizers plan to plant milkweed and other nectar plants to help save the endangered Monarch. According to one official, Oklahoma’s commercial agriculture sector and pesticide use has been a driving force in the Monarch’s decline. 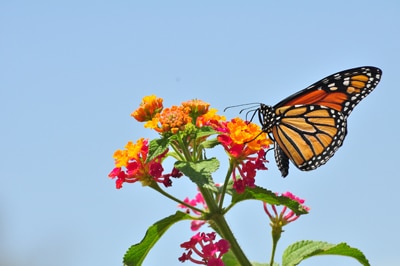 Speaking at a community garden workshop at CPN, Dr. Carol Crouch, the state-tribal liaison for the USDA Natural Conservation Service, explained the connection.

“With Oklahoma being a main corridor for the Monarch, the agriculture business has had the most impact on their main sources of food,” said Crouch. “Milkweed is usually targeted as a weed. There needs to be an effort to save the plants that would help save the near-extinct Monarch.”

“We have been doing a lot of work on the Monarch lately because it is in a catastrophic population decline of over 90 percent,” said Breckenridge. “The decline is significant because 30 percent of all agricultural crops and 70 percent of all plant life requires pollination by an insect and these pollinators are  disappearing at an alarming rate.”

Breckinridge’s organization is home to the “Natives Raising Natives Project,” which teaches butterfly  farming to tribal citizens in rural Oklahoma. The three goals Breckenridge tries to achieve with her organization are to provide employment, stimulate science education for Native youth and promote conservation of Monarchs and the fragile ecosystems supporting them.

“If you look at a tribal jurisdiction map of Oklahoma you can see that nearly all of the Monarch’s  migration in critical condition falls within tribal boundaries,” said Breckenridge. “We haven’t seen any interest about this come from the leadership of the state of Oklahoma. However, I knew all along to save the Monarchs and other endangered pollinators that this effort needs to come from the tribes.”

Cultural Heritage Center Director Kelli Mosteller, Ph.D. is one of the CPN’s community garden organizers and attended the workshop to learn about what they can do to help. She, along other Tribal members and employees, started the community garden in 2014. The first two seasons volunteers used different weed  killers, but now are working to have an all-organic garden.

“Our main goal with our garden is to bring community together, which includes all of the animals and insects that gather there as well,” said Mosteller. “A billion Monarchs have disappeared and we want to know what we can do to not further damage their habitat.”

The CPN community garden is a grant funded project. Beginning this spring garden volunteers will work to develop a safe haven for Monarchs, who are not only beneficial to pollinating plants, but can also be used to teach Tribal youth and visitors. Community garden volunteers will incorporate plants into the garden that attract different pollinators, like Monarchs. The butterfly friendly plants will supply the  vegetable harvest each season and serve as a food source for pollinators.

“Like most tribes, CPN is located in a rural area, surrounded by commercial agriculture, which is killing the Monarch,” said Mosteller. “Incorporating a safe haven for a culturally significant symbol to our Tribe is a step in the right direction to saving the Monarch.”

If you would like to know more about the work of Jane Breckenridge please visit www.nativebutterflies.org and stay up to date with the Tribe’s garden at their Facebook page, Gtegemen: CPN Community Garden.