Keep the commodity cheese away from Fawn White, thanks.

“I hate commod cheese,” she said. “I despise it when I hear people say, ‘Oh, I love that cheese!’ Well buddy, you didn’t grow up on that cheese.”

With American Indian and Alaska Natives more likely to struggle with regular access to food, that  cheese, distributed through an assistance program offered by the U.S. Department of Agriculture, is a  regular sight in many Native houses, including White’s childhood home in rural north-central Oklahoma. It has also left a lasting imprint on thousands of palettes and psyches.

Darcy Freedman, an associate professor of applied social sciences at Case Western Reserve University’s Prevention Research Center for Healthy Neighborhoods, has been studying food security  for 15 years. Since the Great Recession in the late 2000s, Freedman has noticed an increase in the number of food insecure households from all backgrounds, even as the economy stabilizes.

“It used to be 10 percent of Americans were food insecure,” Freedman said. “It’s still shocking that in  the wealthiest country, that it’s a reality. Children and seniors are hit hard, and those are two  populations where food is medicine, as it allows you to provide resiliency for your mental health.”

That proverbial missing medicine leads to higher rates of mental health concerns, not only in childhood, but also among adults who experienced food insecurity during their  formative years.

In a 2002 journal article published by the American Academy of Pediatrics, a study of both preschool and school aged children showed that even when taking into account other factors, students who were chronically hungry had higher rates of depression and anxiety.

The study also found a correlation between chronic childhood hunger and higher rates of externalizing  behaviors, such as poor self-control. For some children, that may mean acting out at school, as evidenced by a November 2015 study of kindergarten and first grade students that found children in food insecure households were more likely to have disciplinary problems than their classmates coming from homes with sufficient food. 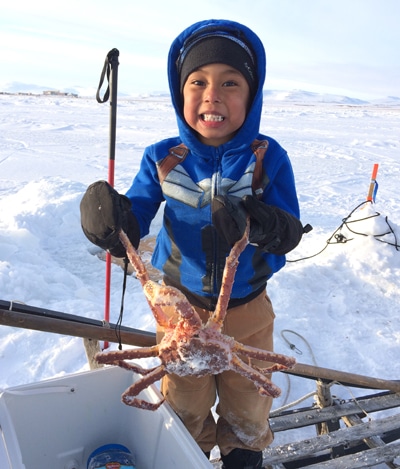 White wrestled with self-control as well. However, her struggles were at the dinner table with her siblings and frequently present cousins rather than in the classroom in an effort to avoid going to bed on an empty stomach.

“It was like a race for us,” she said. “I don’t know why, but we needed to eat, and have seconds and eat until everything was gone. We were like locusts.”

That fight to maintain self-control can manifest itself long after food access is more stable. Alison Black, an Osage, Cheyenne and Prairie Band Potawatomi mother of four, grew up in a house that, aside from the school lunch program, did not participate in any food assistance programs. Other than going to a cousin’s home or raiding the pantry at her mother’s employer, it was not uncommon for her only meal to come from the school cafeteria or for dinner to consist of popcorn and boiled eggs. Those memories have helped shape mealtime at the Black house. The children’s favorite snacks are regularly available and eating out more than once a week is not uncommon.

“I think this is the thing that I know that I can make sure they can have, so I do not mind indulging in eating out quite a bit,” she said. “I never tell them no when it comes to food.”

According to the U.S. Department of Agriculture, as of 2014, an estimated 14  percent of all households are consideredfood insecure, or struggling to consistently access adequate  food. Even higher rates of food insecurity are present among families with children, those headed by a single parent, families from rural areas and those living within 185 percent of the poverty line.

Families relying on food assistance programs, either through a state or tribal government, a local  non-profit organization or a church, are included in the number of food insecure homes.

“If you’re not able to provide food, it makes it difficult to feel like you’re living a dignified life,”  Freedman said. “It’s a basic need and the mental health implications are very real. ‘If I can’t provide food for my kids or partner, who am I?’”

The USDA’s most recent report on food security among Native households, presented to Congress in January 2012, placed the food insecurity rate at about 23 percent. That figure was based on data collected between 2006 and 2008, before the Great Recession. The newest report on household food insecurity available through the USDA does not include Native American, Alaska Native or Native Hawaiian families in its racial/ethnic breakdown. However, several of the characteristics of families  meeting the definition of food insecure are frequent among indigenous families.

Several of those risk factors applied to White’s family, which met the income requirements to receive assistance through FDPIR, an option available to eligible Native families as an alternative to SNAP. Eligible households must meet similar income requirements as SNAP participants, live either on or near a reservation or in certain areas of Oklahoma and not have a nearby licensed SNAP vendor, such as a grocery store or farmer’s market.

Like many Native and non-Native rural areas, White’s hometown, the unincorporated community of White Eagle, Oklahoma, does not have its own grocery store. The nearest one is almost 10 miles to the north in Ponca City, Oklahoma, putting the town on the edge of a food desert.

Federal legislation now places an additional emphasis on providing fresh or frozen food and more tribes have set up grocery store-style facilities in recent years to allow participants to select what commodities they want. However, those options were not available for White’s family during her childhood.

Instead, the Ponca and Cherokee family of seven received a large monthly box of shelf stable fruits, vegetables, meats, juice, dry cereal and dairy products, including a brick or two of yellow, slightly springy, processed cheese. The box also often included an item or two that would raise some eyebrows among White and her siblings and turn their kitchen into a rezstyle version of the show “Chopped.”

“We used to get canned pink salmon with our commods and we thought it was the grossest thing ever,” she  said. “We would feed it to the neighborhood cats. Why in the world would pink salmon be given to Plains Indians? They have no idea what to do with it!”

Finding food somewhere other than Wal-Mart Elizabeth Hoover, a Micmac and Mohawk assistant professor of American and Ethnic Studies at Brown University, specializes in food sovereignty, or the right to healthy and culturally appropriate food produced through ecologically sound and sustainable methods, and the right for groups to define their own food and agriculture systems.

Many tribes have lost access to healthy, culturally appropriate food over the last two centuries. As part of the “kill the Indian, save the man” mindset, boarding schools emphasized Western recipes. Federal relocation policies forcibly uprooted families from traditional hunting and farming lands first to reservations in the nineteenth century and then again in the 1950s and ‘60s to cities nationwide as part of the Urban Indian Relocation Act. With that access disrupted, traditional dietary staples, such as kanuchi (Cherokee hickory soup) and Ponca red corn began to fall by the wayside. Instead, fry bread and other dishes  that could easily be made from items either commercially available or provided through government issued rations became staples at the dinner table.

“Restricting access to food is a direct attack,” Hoover said. “When you impact the ability for a tribe to feed itself, it changes everything. Just look at what happened with the boarding school era. Those students were told ‘You must farm this way. The ways your ancestors did things was wrong or backwards.’”

Steps are being taken across Indian Country to reclaim those traditional foods, such as the Cherokee Nation’s heirloom seed bank and the Bishop Paiute Tribe’s aquaponics project in California. However, the long-term impact of those policies still linger.

After relying on Wal-Mart and government assistance programs growing up, the move to Alaska was jarring for White, as her new neighbors and friends utilize the same food sources as their ancestors.

“Living in rural Alaska is such a big jump from where I grew up in terms of food and nutrition,” she said. “The people here still eat the same foods their ancestors ate. They still hunt the same marine mammals and land mammals. They still pick the fresh greens and berries and fish for the same fish. It continues to blow my mind.

“I never realized that people lived off the land because growing up where I grew up, we did not. The  government beat us down and ingrained it in us that we needed them to survive. We needed them to house us, clothe us, feed us. We were not able to do that ourselves. We needed them.”

As an adult, White is still feeling the effects of growing up in a food insecure household. She tried roasted brussel sprouts for the first time in her mid 20s, followed by asparagus, avocado and other greens, helping prompt what she calls a “love affair” with fresh produce. Overeating at meals is sometimes a struggle for her, a remnant of rushing the dinner table.

A staple of her childhood, commodity cheese stays off of the menu at her house, as do canned vegetables.

However, their legacy shows up in the discussions she and her fiancée, an Alaska Native, have with their  6-yearold son about food and nutrition.

“I’m thankful I have an Alaskan Native family who is able to teach me to subsist and to love the outdoors,” she said. “I’m thankful my son is being raised in the subsistence life. He is being taught how to hunt and fish  and how to properly store his food. He is keenly aware of where his food comes from. When we eat bacon or sausage, he wants to know who shot it and where.”