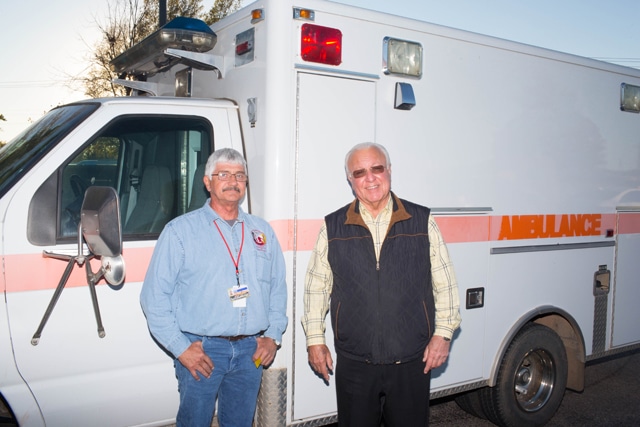 When first responders receive a call for help they know their fellow agencies are listening and ready to provide backup. This is how the working relationship between the CPN Tribal Police and sister agencies like the Pottawatomie County Sherriff’s Office has worked for years, and in recent months that partnership has only increased.

Sherriff Booth points out that in largely rural counties like Pottawatomie County, partnerships between first responders from a wide array of agencies are vital to serve and protect.

“Working with CPN and other tribes isn’t just that it’s good for the sheriff’s office or one specific agency,” noted Booth. “It’s to the benefit of the population that we serve and as first responders it makes our jobs easier.”

Sheriff Booth sits on the Pottawatomie County 911 board of directors and recalled his surprise at hearing CPN Tribal Chairman John Barrett’s February 2015 proposal to pay for the county’s 911 dispatching services. The agreement, which was finalized and put into effect in October 2015, allows fees once paid to use the system to stay with agencies and be put back to use for first responders.

“To have Chairman Barrett stand up in that meeting and make the offer that he did, not only was it a relief to many of us who were struggling to find a way to increase our services, not just trouble shoot the challenges we already had. It was a big, big deal,” said Booth.

Many county agencies have put those funds once paid for the 911 services back into capital improvements. For the sheriff’s office, Booth notes that multiyear efforts to upgrade his agency’s auto fleet has been boosted by an estimated $82,000 saved now that CPN bears the costs of running the emergency dispatching response services.

“As the chief law enforcement officer in the county, I still have to provide these services, regardless if there’s agreements like this one in place or not. Because of this partnership that we have, I can provide more for my deputies, who in turn respond to calls and back up our sister agencies, like the CPN Tribal Police. It helps all of us really.”

The sheriff’s office also recently accepted a donation from the Tribe in the form of a decommissioned  ambulance, which will be retrofitted and upgraded as a mobile crime scene office for sheriff office investigators. It was secured through a federal government surplus sale by the tribe. Originally intended for the tribal police department, it was rarely used and passed on to the sheriff’s office after consultation with CPN Emergency Management Director Tim Zientek. Tribal Police Lieutenant Jody Opela secured the vehicle through the auction and had on occasion loaned the tribe’s own mobile unit to sheriff’s deputies.

“After being approached by one of the county detectives about its use, I approached Vice-Chairman Linda Capps about donating the unit to the county sheriff’s office and she approved the donation,” said Zientek. “They would use the vehicle to store the evidence collection equipment and other equipment to use at a crime scene in order to facilitate a timely and extensive investigation.”

Sheriff Booth notes that in the long hours that can sometimes stretch into days on a crime scene investigation, the ability to step inside a climate controlled mobile unit for a cup of coffee or a brief break can make a huge difference.

“Being able to get out of the heat or cold after working on a crime scene for eight or nine hours is such a big deal to our investigators. Without the Tribe securing the ambulance and donating it to us, my officers might not have that option.”

Since a signing agreement between County 911 Trust Chairman J.R. Kidney and Chairman Barrett in June 2015, the Tribe has taken over costs and dispatching services for the county. On Oct. 13, the services officially switched over to the upgraded dispatching center located inside the tribal police headquarters. CPN spent $500,000 upgrading the technology and infrastructure of the building as well as hiring of ten former county 911 employees.