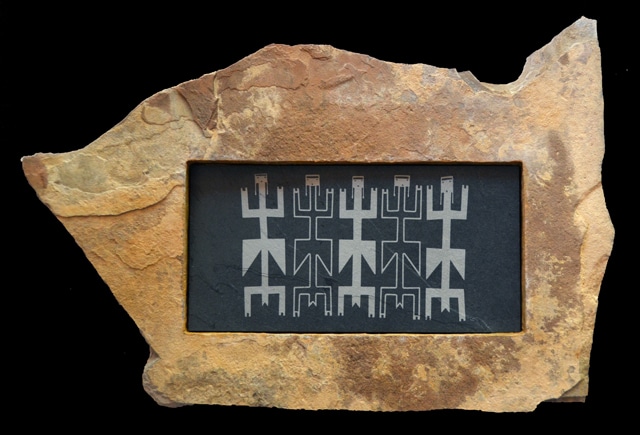 Famed Potawatomi artist Woody Crumbo made his name in the art world with his Southwest inspired paintings. Crumbo lived in Taos, New Mexico throughout the majority of his professional career. He, like many other artists, captured what was around him. For the past ten years, a Potawatomi mother and son have been following a similar path as Crumbo with their own art in the Southwest desert in Phoenix, Arizona.

Chris and Cathy Short are Lizard Light Productions, a small Native American contract photography and multimedia company. The business started with Chris when he needed a name for his videography business in the early 2000s. He teamed up with his mother Cathy and the two started out doing contract, event and landscape photography together under the Lizard Light Production name. Today photography and videography have been joined by the different mediums they have each been pursuing, including laser and textile art but they still do event and exhibit photography.

“Our biggest client for the last 10 years has been the Heard Museum,” said Cathy. “We have also done photography and produced videos for IHS, The Phoenix Indian Center and many other Native American enterprises.”

Most of their inspiration for their work comes from their own cultural background and the world that surrounds them in the Southwest. One of their goals is to expand traditional Native American culture as well as push the boundaries of Native American art. Cathy makes contemporary clothing and accessories using traditional and cultural inspiration. For instance, instead of using Seminole patchwork on a traditional blouse and dress, Cathy will use it on a men’s vest or t-shirt. Cathy said that what she is doing with fabric art, Chris is doing with laser art.

“We don’t want to step away from our connection to traditional Native American art, we want to marry it with what’s contemporary and even futuristic,” said Cathy.

During the day Chris is a System Administrator for IBM in Phoenix, but when not at work he makes experimental dreamscape photographs by recreating petroglyphs using laser projection on sandstone. Chris photographs traditional petroglyphs in native environments. He then takes the photographs and converts them into digital data sets that can be projected through laser equipment that he has designed and constructed. The laser petroglyphs are projected onto rocks, which he gathers in the desert, to make what he calls “dreamscapes.”

He also etches his petroglyph designs onto slate and wood, framed as wall art by his father Hank. Chris explains that this method of work is specifically unique to him.

“My interest in this certain type of medium comes from trying to preserve the history of rock art. People will vandalize and steal petroglyphs and I have made laser printing my tool of preserving these old drawings.” 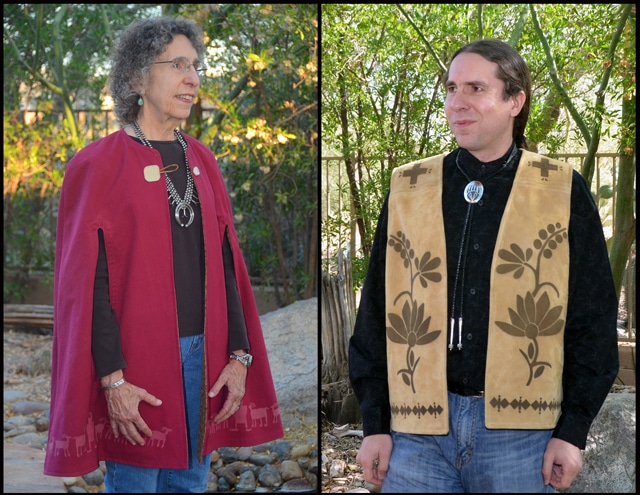 Three years ago Chris started submitting his laser projects into competitions to the International Laser Display Association. The group is a worldwide non-profit trade association dedicated to advancing the use of laser displays in art, entertainment and education. Chris’ projects fall under the category of abstract laser shows for ILDA. In 2013 he won third place and in 2014 and 2015 he swept the entire category for first, second and third place. The first and second time  anyone had ever swept the abstract category.

Cathy is known for her textiles, which often include deerskin, century- old shell buttons, and hand  embroidery. She is known for her unique designs and professional finish work and for making clothing and accessories that have a traditional touch in a fun and contemporary way. Much of what she makes are for custom orders, working with clients from around  the country. Her work will be featured in a special fashion show at the January, 2016, Litchfield Park Native American Arts Festival. Having their opposite styles of work, Cathy and Chris manage to use their talents in a collaborative process. For example, when Cathy make a deerskin vest or tipi cape, Chris will use his laser program to etch Native inspired designs directly into them. For Cathy’s folded ribbon work, Chris cuts out designs in fabric using his lasers.

“Part of what we also try to do is give back to the Native American Community because we have been fortunate to be where we’re at,” said Cathy. “We have a handful of Native artists who we take pictures for.”

The artists they photograph need help marketing their work so they trade their talent for some of the artist’s work.

“Good photos can help them enter competitions or submit their art for gallery showings,” said Cathy.

Since Chris moved to Arizona Cathy explained that they were able to implement dream to work together using their artistic talents.

“Our art is a way of teaching people and other Natives about the Potawatomi,” said Cathy. “What we do is make everything we do a piece of art. It means everything to me to be a Native American artist. It’s a way of expressing culture, a way of keeping the Tribe alive and working with my son is an inter-generational transfer that keeps the culture going. “

The two share an art booth where they sell their work at many different Indian art markets in the Southwest.