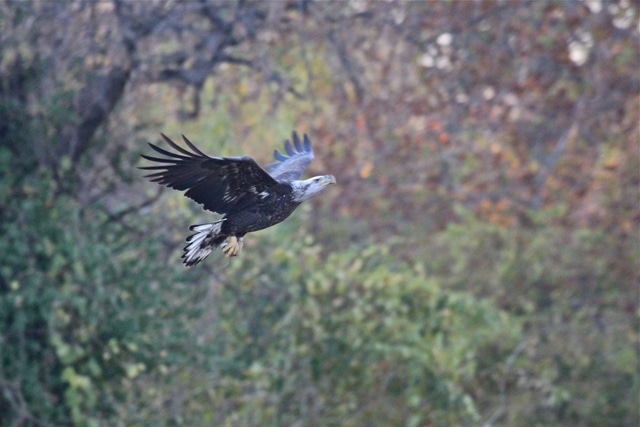 Here in Oklahoma, we are already beginning to see migrant bald eagles coming in for the winter months. Large kettles of vultures heading south have been a regular sight above the aviary as well. Perhaps that is why Wadasé Zhabwé returned in mid-September, after an absence of nearly eight months. She may be following migrating birds as they know that the first day of winter was less than a month away.

When Wadasé left after her last week and half long visit, we wondered if it would be another eight months before we saw her again.

She returned to an area that she has frequented a great deal in the past near Horseshoe Lake in Harrah. There is a possibility that those nesting bald eagles on the lake have already returned to the area. On our recent trip there we did spot an adult male flying above the lake and another perched near the nest. Several waterfowl have already arrived and are all around the lake and nearby recently harvested farm fields. Although, she could have returned for the food, hunting would be much easier in an area packed with literal sitting ducks.

Unfortunately, one of her favorite spots on the North Canadian River, where Squirrel Creek meets the river north of the aviary, was drastically changed by the floods in May. The large cottonwood tree near the river bend was washed away when the river overflowed and the once shallow area that coots and ducks would float together by the hundreds is now a deep area full of tangled trees. Not one duck remains. While we may never truly know what influences her decisions, we did have one question answered.

Would we have to wait more than half a year to see her again?

The answer would be no. On October 6, just two weeks after heading back to Harrah, she came flying in that afternoon. She landed on her crook, in the big pecan in front of the aviary, where she sat until dusk. She arrived early the next morning as she did for the next four days. On the fifth she was gone. Once again, she returned to the same area in Harrah. This has become a quite regular pattern. She comes in to visit for a few days and is off again. She has arrived and shown off for tours and meetings. Many times she puts on quite a display, flying all around the pasture to get a rise out of the eagles in the enclosures and then comes in to land on her perch for what would seem to be her photo op for the guests. She was also here recently during a tour of Japanese delegates and after her flight she received a traditional bow of respect and gratitude. The whole experience was quite moving.

Although Wadasé has visited regularly, she doesn’t always stay the same amount of days each visit. One morning she arrived and spent the majority of the day perched out front but we did not see her on the following day.

However, Horseshoe Lake is only about 22 miles away, so she can easily make the trip in an afternoon.

We are curious to see where she spends the winter and what new patterns we learn from her telemetry and hopefully from seeing her as well. We feel like there is a good chance this may become her winter routine and as  she approaches breeding age. If she winters here that would more than likely mean she nests here and we, of course, are keeping our fingers crossed. As always we encourage you to keep your eyes out for Wadasé if you are near the areas she frequents. To follow her movements with us you can visit www.arcgis.com/home and search for “Potawatomi eagle.”

Send your encounters with Wadasé or any other eagles in Oklahoma or wherever you may be to the CPN Aviary at aviary@potawatomi.org.