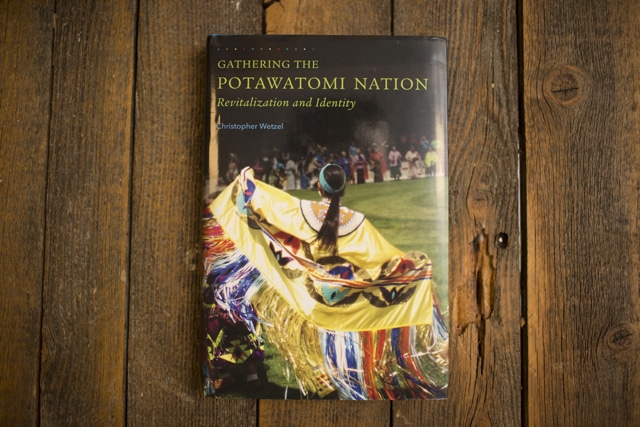 Author Christopher Wetzel knows a lot about the Potawatomi Gathering of Nations. Attending 12 of the last 13 Gatherings, including three Family Reunion Festivals in Shawnee, Wetzel estimates that he may have been to around 30 tribal powwows and events in more than a decade of observing Potawatomi culture.

His recently published book, “Gathering the Potawatomi Nation: Revitalization  and Identity,” has been making the rounds amongst the various bands spread across the U.S. and Canada. Wetzel started the book in 2001 as a graduate student at the University of California Berkley. He had conducted research on land seizure activism, focusing on incidents like the 1969-71 Occupation of Alcatraz. Following an urge to return closer to home in the Midwest, Wetzel was introduced to two Potawatomi, one from the Prairie Band in Kansas and another from the Citizen Potawatomi Nation.

“When I met them they told me about the Gathering, this interesting event that Potawatomi people were doing. They told me if I was interested, I should visit it and look at what was happening there.”

Wetzel began researching the event and histories surrounding the various Potawatomi bands, and soon realized that contemporary written sources weren’t readily available. The absence of those resources led him to reach out to each band and ask permission to visit their communities and document life and culture.

“I have to say from spending 2002 to 2013 out in communities and revising it and working on it, it was really the more recent things that became more compelling that people were more excited about in the communities,” said
Wetzel.

Wetzel says the book tries to answer three questions; what does it mean to be a nation in contemporary cultural context? Why the Potawatomi? And what has been happening on the ground in each community?

Asked if he noticed any similarities across the Potawatomi bands, whichstretch from Canada to Oklahoma, Wetzel admits he stole his answer from an old McDonald’s commercial, saying one commonality seems to be “food, folks and fun!”

Wherever he went in Potawatomi country, the common theme was family, whether telling stories of ancestors
and parents, friends from other bands or the relationships they’d established with fellow Potawatomi.

“When you sit down and share meals with people and drink coffee with them, you get that sense that they have things they care about, that matter to them in their lives and that sometimes we don’t get to see in conventional academic texts related to indigenous communities.”

In more than a decade visiting Potawatomi around North America, Wetzel said that one of the biggest surprises to him was the feeling of interconnectedness by family ties amongst the different bands. He explained that he would often speak with members of one band about happenings in another, often finding that the news had already trickled in ahead of his visit.

“Everyone has a cousin somewhere. That shouldn’t surprise me, but man is that true! Regardless if you’re sitting in Shawnee, Oklahoma or Wilson, Michigan or Perry Sound in Ontario, it’s the closeness of how all these connections are.”

Part of that Potawatomi networking ability may also be a unique factor. Wetzel observed that when speaking with members of non-Potawatomi tribes, there is often a sense of awe at the bands’ ability to collaborate on an annual gathering, language revitalization and other cultural ties.

“I really think there is something very unique about the leadership across all of these communities that has kind of made this family collaboration and cooperation possible.”

Now published, Wetzel hopes the book would share the spirt of several experiences he had across 13 years of
speaking with Potawatomi.

“People would tell me stories and make it clear that they were sharing things with me that aren’t supposed to be written. There’s some knowledge that is not meant to be in that kind of venue. But they offered these stories to me to provide some context to things that I would write in the academic record. My hope is that the book is able to capture a little bit of that spirit, of what people have been up to and what has been valuable to communities in the last thirty years.”

Looking forward, Wetzel isn’t sure where his next project will come from. The Massachusetts-based writer says he is interested in the tribal-state relationship between the peoples of that state, specifically on how the state government interacts with Native Americans living in their longtime communities and those in large, urban areas.

To learn more about Christopher Wetzel, who is an associate professor of sociology at Stonehill College in Massachusetts, visit www.stonehill.edu/directory/christopher-wetzel/.

“Gathering the Potawatomi Nation: Revitalization and Identity” can be purchased at the University of Oklahoma
Press.