Stories like that of Kansas City Chiefs safety Eric Berry, who made a comeback to the NFL after being diagnosed with Hodgkin’s lymphoma in 2014, offers hope and inspiration to those battling their own health issues. Closer to home, a participant in the annual Day of Champions Football Camp at CPN has been waging a similar battle while staying out on the gridiron. 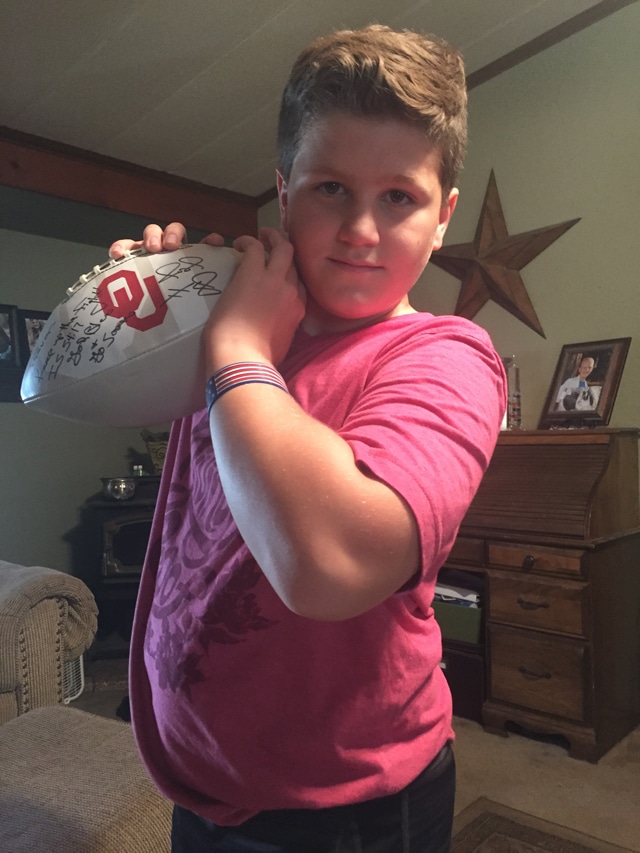 Diagnosed with stage three prostate cancer at the age of nine, Trevor Storie spent 42 weeks in chemotherapy and six weeks of proton radiation to treat Rhabdomyosarcoma, or RMS, a rare malignant tumor involving striated muscle tissue, it is very rare in children his age.

Storie has been a participant of the Day of Champions Football Camp hosted by CPN for the past four years. The camp was founded by former collegiate football coach Ken Heupel and son, Josh, the 2000 national champion from the University of Oklahoma and current offensive coordinator at
Utah State University. Though he’d become a regular at the July event, in 2014 Storie was not able to participate due to his cancer treatment.

“Last year he was going through treatment and wasn’t able to stay at the camp but he did his best for what he could do,” said Trevor’s mother, Zona Storie.

Sarah Lawerance, CPN fitness instructor and coordinator of the camps asked him to come and be the music DJ in the announcer’s box so he could still be a part of the camp.

“He was so weak that it took a lot of energy for him to walk up the stairs,” said Lawerance. “After about an hour and a half he was exhausted, but Josh Heupel signed a football and put an encouraging quote on it as well as a Bible verse.”

At one point in his treatment Storie wore leg braces as a result of his chemotherapy treatments. He went from an extremely physically active child to one who was hardly able to walk. After battling the disease throughout most of 2014, Storie received a cancer free diagnosis in October of that year.

“The one thing that has really stuck with me was when he was sick and throwing up and going through chemotherapy, he always chose to focus on one good thing that happened to him that day,” said his mother. “Everything is going great now and he’s doing really well.”

Football is the activity that Storie loves the most. A year before his diagnosis he played his first season for a Pop Warner football team out of Meeker, Oklahoma. At this year’s camp, Trevor was able to participate in all of the activities and looks to be on the field in July 2016.

“To see Trevor excel in the 2015 camp like he did was amazing,” said Lawerence. “It was a privilege for all of us to see the determination and fight in him and he is an inspiration to all of us.”

“He loves learning and the coaches at the camp interact with the kids so well,” said Zona Storie. “I think it’s really great for the community to get involved in the camp. The coaches don’t just teach football, they teach the kids nutrition, discipline and how to overcome challenges in our lives.”