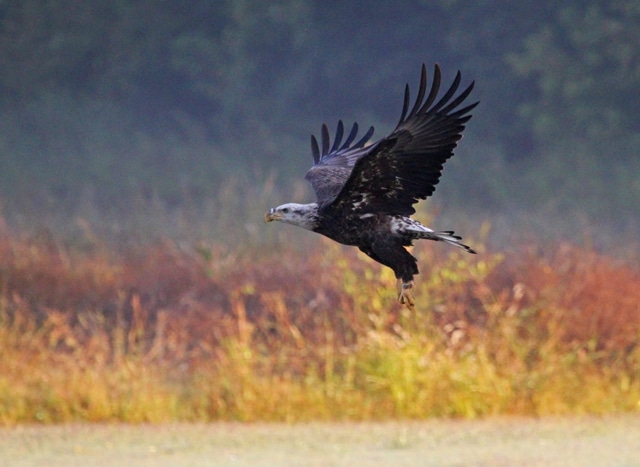 233 days is the equivalent of seven months and three weeks. That’s how long it has been since Wadasé Zhabwé has stopped for a visit at the aviary. The last time that she was here was January 23, 2015. Studying her telemetry, we know that she flew over as she passed through on her return trip from the Keystone Dam area near Tulsa as she headed back to an area south of Lake Arcadia. At 2,000 feet though, we weren’t able to see her.

Without her GPS transmitter we would have never known she was anywhere close to the aviary. We continued to monitor her telemetry and had made arrangements to go out on horseback along the North Canadian River where she has been staying for the better part of the summer. We had made several trips to the area and spent long hours searching the sky and tree line for a glimpse of her with no luck. The area has few roads into the places she frequented and not knowing that section of river well, we opted to go on horseback in mid-September. However, Wadasé had other plans. In the afternoon on September 13, 2015 we heard the eagles calling and spotted what we at first thought was an adult bald eagle flying out over the aviary.

We hurried into the office to get binoculars just in time to see that eagle land on Wadasé’s crook in the pecan tree out front. We could hardly believe our eyes, even after checking to be sure the eagle was wearing telemetry and was banded. Wadasé Zhabwé was really home! Seeing all the telemetry points on a map are reassuring seeing her at the aviary after so long was one of the most rewarding moments for us since her release.

Even though we knew that she was maturing with each molt and that she would have a whiter head and tail, we were shocked at just how much her appearance changed. In flight, high above the aviary, she looked like an adult to the naked eye. You could see some dark on her tail but her head appeared almost completely white. We spent the evening peering out the office window. As the sun set that evening, we watched her fly down the creek towards the river. The next morning we came to the office well before sunrise. As the sun began to peak above the horizon, (Aviary Director) Jennifer (Randell) stood on the sidewalk out front and called for her like she had done so many mornings when Wadasé was first released. 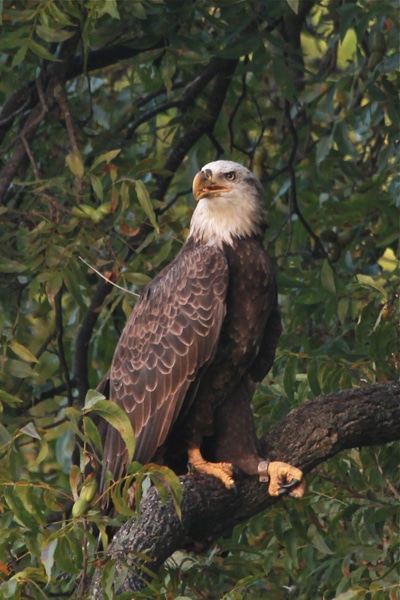 While we waited we agreed that we had been lucky to spend the evening with her. We questioned if her behavior had changed as much as her appearance had. Did she just wander here or had she flown straight home? Was she just passing through or would we see her again? Was she still comfortable here and does it feel like home to her or would we even have the chance to find out some of these answers? Just when we had decided that she was not around, she came flying in from the east pasture, low across the creek. She followed the tree line all around the pasture before banking and climbing up high above the aviary before coming in to land on her crook out front. She put on quite the show. She sat in her crook preening as the sun rose clearing the fog that had settled in the pasture.

She flew to the top of the aviary and landed on the center beam forcefully and peered down at the eagles below. From the office we could hear her vocalize and watched the other eagles respond. It would seem that she had not forgotten her surrogate family here.

From time to time throughout the day the eagles would call as they watched her take short flights around the aviary from one tree to the next. She spent the biggest portion of the day at the aviary grounds as if she had never left, certainly not like it had been gone more than half of a year. But we could see a difference in Wadasé. Watching her fly, it was apparent that she was so much more confident and strong. She moved with precision and skill that we had not seen from her in the past. She spent more time perched above the creek as she preferred to hunt for her meals here now.

She really has matured and grown.

She continued this same routine for days, greeting us at sunrise. However, on September 22, she spent the better part of the day away from the aviary. Late that evening, just a little after 7 p.m., she came in from the river. Perched high in the pecan out front she would occasionally chatter a bit and just before dark she headed towards the river once again. Perhaps she was saying goodbye because we didn’t see her the next day. Checking her telemetry, we know she did in fact come directly home, in a short two hour flight from the area south of Lake Arcadia. While she was here, she seldom got more than a half mile from the aviary. When she left that morning she headed back towards Harrah, Oklahoma and stopped along the North Canadian River in an area where she has been several times before. While she was here at the aviary, several tour groups had the opportunity to see her, including a group of the CPN Tribal youth as they worked in the community garden located on the aviary grounds.

We are happy to know this place still feels like home and that we have the opportunity to continue to tell her story as she continues to defy the odds and carry our prayers to Mamogosnan.