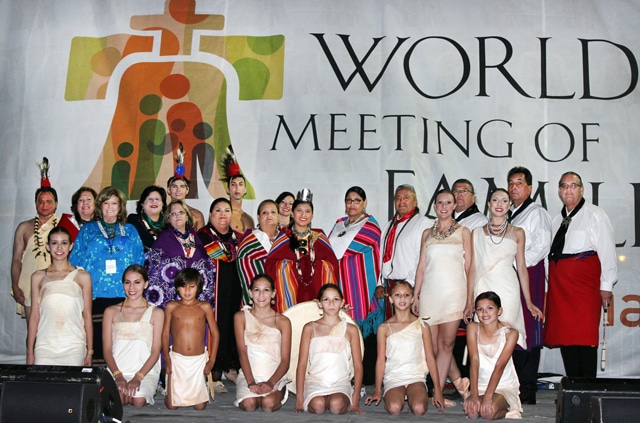 When the most recognizable religious authority in the world decides to visit, the pomp and circumstance involves hundreds of thousands of people. Amongst those attending the recent visit of Pope Francis were 30 members of the Osage Nation and Scott George, an Osage citizen and director of the CPN Housing Department. George, who is affiliated with the WahZhaZhe Osage Ballet, was asked to be part of a performance for the pontiff’s visit to the City of Brotherly Love.

Director of the Osage Ballet, Randy Tinker Smith, reached out to George, who is the head singer for many Osage Nation powwows and festivals, as well as the Citizen Potawatomi Nation’s powwow during the Family Reunion Festival, to help in create a ballet using many of the old songs sung by the Osage’s ancestors.

“They used to say, with the Ponca on the West and the Delaware on the East, that they could hear the Osage singing in the mornings. They prayed in the morning, at noon and at night. That’s how strong they were in that faith,” George explained.

The ballet is a tale of the Osage people, documenting their removals to Oklahoma, the oil boom of the 1920s and other contemporary histories of the tribe.

“In our Osage culture, we pray before we do anything,” said ballet director Tinker Smith. “It is an age old tradition from our elders who would pray before they put a seed in the ground, before a hunt, when naming children and during many other times during the day. Some elders remember hearing the singing and prayers of our people as the sun would rise. We open our ballet with a morning prayer song to depict those pre-contact times. I felt it set a standard for our story as we used ballet to give an artistic description of some of our Osage history.”

Upon hearing of Pope Francis’ impending visit to the Festival of Families in Philadelphia, Tinker Smith sent off a video of the Osage ballet to the group organizing the visit. A portion of the ballet was chosen, and a bus load of 30 Osage singers, dancers and support staff loaded up on a charter bus for a 24-hour trek to Philadelphia.

“Scott is a well-respected singer for our Osage Nation,” said Tinker Smith. “He put together a group of singers for our original ballet soundtrack and I appreciate him doing that for us. I  wanted him to be with us at Festival of Families because he understands our ways and would represent our tribe well. It takes a lot of years, commitment and sacrifice to learn our songs and the wisdom to understand how and when to present the songs in the right manner. Scott has dedicated himself to our people and is an Osage treasure.”

The group had time for brief dress rehearsal, which took place an hour after their arrival, before turning up to the performance site early the next morning to sit through a pleasant, if not long Pennsylvania afternoon before their show began.

“Well we just hung out,” joked George of the long wait before their performance. “We were out on an island, because there was so much security and confusion with the pope’s arrival. It was amazing though, we got to see a group from Indonesia perform. One from India had 60 dancers going at once.”

Just as the group was set to perform, George said that an audible roar began to envelop the street, and before long, the Popemobile was rolling down the road in front of the Osage performers and tens of thousands of others. George even got a firsthand glimpse, standing just twenty feet from the pontiff as his vehicle made its way through the crowds. Once he passed, the Osage took the stage, with George leading the singing. About halfway through the 15 minute performance, the roar of the crowd began again.

“We got to thinking ‘Alright, we got ourselves a little bit of the audience,’” he said with a laugh. “Just then, the pope goes flying by again. He’s just riding around!”

To give them access to the performance stage, the Osage ballet group was issued badges allowing them to travel in restricted areas. Wearing one of these, George, his wife and a member of the Osage News found themselves with an interesting spot to see mass celebrated.

“We were just wandering around near the main stage where the pope was, and on one side across from us was 500-1,000 priests, all dressed in white. I started looking around at who we were standing around, and I noticed that all the guys surrounding us were wearing sashes. I realized we were in the middle of a bunch of the Knights of Columbus and thought to myself, ‘Man what are we doing here?’”

George said his one regret is the group not stopping to see the Carlisle Indian School while in Pennsylvania, but chalked the long trip up to a successful journey.

“My wife said it best; ‘you could feel the atmosphere there, that everyone was there for one purpose.’” he said. “The bus ride was a killer, but it was definitely worth it.”