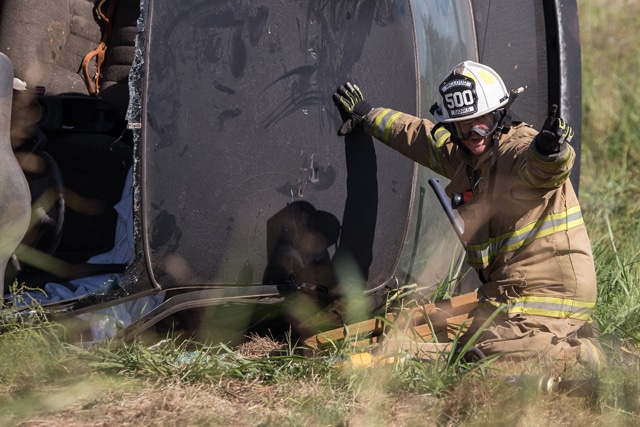 First responders from numerous Pottawatomie County-based organizations gathered near Grand Casino Hotel Resort to practice for various emergency situations in late September 2015. Though operating at full speed, the emergency management professionals were only practicing a worst case scenario as part of a training program held once every three years.

The 2015 Pottawatomie County LEPC HazMat Full Scale Exercise is a multi-agency practice run for emergency responders, with eight organizations represented. Members of the Shawnee Fire Department and HazMat, REACT, the Oklahoma Department of Health, the American Red Cross, Citizen Potawatomi Nation Emergency Management,
the McLoud Fire Department and the Medical Reserve Corps were all present. Other emergency managers from across Pottawatomie County served as evaluators for the exercise’s participants.

“Police officers, firefighters and paramedics, they’re all out here. We’ve even got the medical helicopter on site,” said CPN Safety Director Tim Zientek. “This exercise gives the fire fighters an opportunity to conduct a rescue of this victim who is trapped in the car, and gives all first responders the chance to practice working on a hazardous material cleanup. This whole time, they’re being evaluated on their actions and be mentored on what they need to improve on,” explained Zientek as the exercise took place.”

This year’s event featured a scenario of an automobile carrying chlorine gas that had a rollover accident on the interstate with a passenger pinned inside. 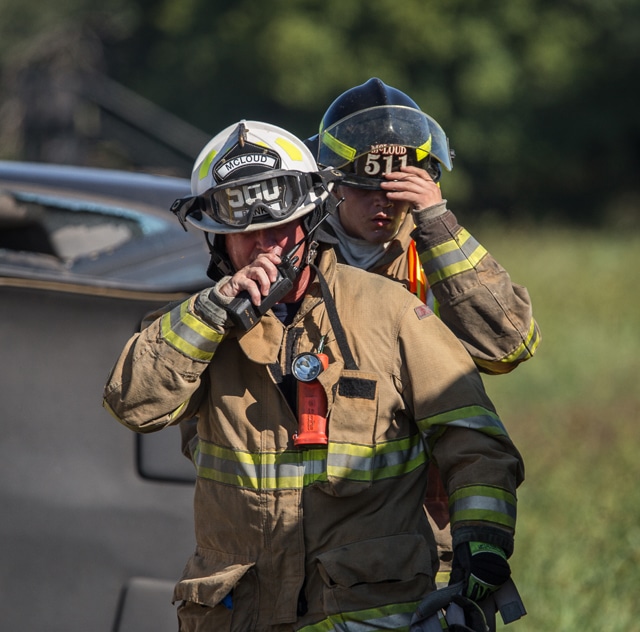 “It’s important to practice communications, specifically in terms of one department understanding how another department will respond and act during an emergency situation,” Zientek continued. “They need to find those stumbling blocks and remove them in a practice scenario rather than deal with it in a real-life emergency.”

The exercise is intended to give the first responders a real experience without the threat of injury. It is held once every three years, with the 2012 version taking place at the Shawnee Municipal Airport. This is the first time the exercise has been held on Tribal property, and Zientek hopes that is a practice that will continue.

“If at all possible we’d like to continue this. We are a part of this community that looks out for our neighbors. We want to train with the first responders because in many cases, our people are the first ones on scene. I would like to personally thank the Grand for hosting, feeding and helping us out with this year’s exercise.”

With all of the traffic that goes through Interstate 40 and State Highway 177, scenarios like the one practiced at the Grand are based off of real-life situations. In areas with smaller populations compared to larger metropolitan areas like Oklahoma City, county emergency response efforts draw on a host of smaller communities and agencies as well as more prominent ones like the American Red Cross.