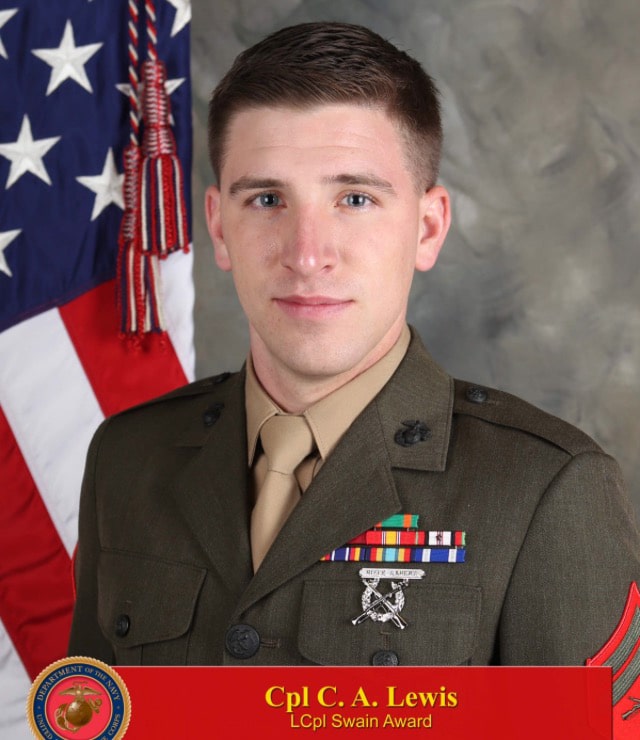 The photos of Potawatomi service members on the Veterans’ Wall of Honor inside the Citizen Potawatomi Nation Cultural Heritage Center are a testament to the willingness of Tribal members to serve in the nation’s armed forces.

Following a path that hundreds of fellow Potawatomi have tread, has been Mokena, Illinois-native Corey Lewis, a member of the U.S. Marine Corps since 2011. Lewis was recently in Washington D.C. to receive recognition for his service during a tour of duty in Afghanistan as the 2014 recipient of the Lance Cpl. James E. Swain Marine Corps Intelligence Enlisted Marine of the Year Award.

“It was truly the culminating point in my military career. I was glad that all that extra effort I put in paid off in the long run,” Lewis said.

Lance Cpl. Swain was a Marine intelligence specialist killed in action in Fallujah, Iraq in 2004. According to the Marine Corps, the award is for enlisted Marines who “best exemplify intelligence excellence, innovation and demonstrate dedication to mission accomplishment within the operating forces.”

“I didn’t even know I was nominated until I got it,” conceded Lewis. “One day one of my staff sergeants texted me ‘congrats’.”

Following his graduation from basic training, Lewis attended the Navy and Marine Corps Intelligence Training Center. In July 2012, he was assigned to the Southwest Analysis Reach Back Element, providing support to the Regional Command Southwest Afghanistan during his six month tour of duty in that country.

Amongst the numerous awards and commendations he has been awarded, Lewis is a recipient of the Navy and Marine Corp Achievement Medal for his tour of duty in Helmand, Afghanistan. Also like many before him, Lewis
can tell you the exact amount of days he has left in his current term of service, which at time of print will be just more than 300 days. He says he plans on fi nishing up his current enlistment and is in the process of applying to college, hoping to attend the University of Iowa in pursuit of either a history or psychology degree.

“I have two career routes right now. I’m either going to go FBI, which I might lean more towards the historical and psychology degrees, or I’ll just go back to fi refi ghting, which was what my original plan was,” he said.