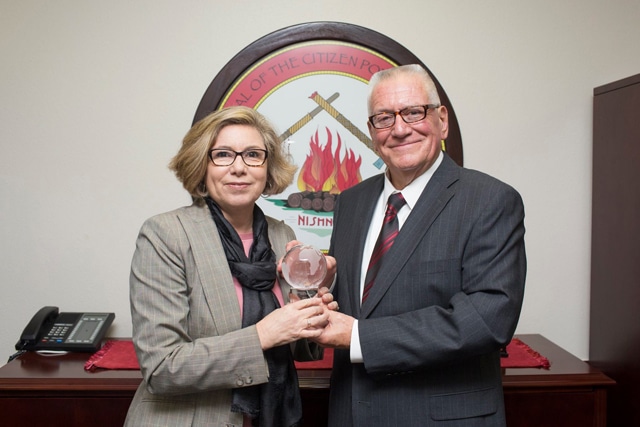 Chances are, if you’ve used a Citizen Potawatomi Nation program, voted in a Tribal election or visited one of the health clinics, you’ve been impacted by the work of a person known in Tribal Chairman John Barrett’s office as “The Rainmaker.”

Self-Governance Director Rhonda Butcher, who has played an integral part in the Citizen Potawatomi Nation’s transition into a self-governance Tribe since 1998, was recently honored by the National Indian Health Board at its annual consumer conference. According to a release from the NIHB, Butcher received a 2015 National Impact Award “for all her dedication and tireless work in the advancement of health policy affecting American Indian and Alaska Natives.”

“I’m really touched,” said Butcher. “I have always considered it an honor to work for the health and well-being of our Indian people. While seeing lives improved is the highest award, recognition such as this by my peers really means a lot. I truly appreciate it.”

A registered nurse and former healthcare consultant from Shawnee, Oklahoma, Butcher joined Citizen Potawatomi Nation following her consultations with the Tribe as it prepared to negotiate self-governance compacts with the federal Indian Health Services and Bureau of Indian Affairs in 1998. In the years since Butcher joined the Tribe, CPN Health Services have expanded to two full-service clinics for Native Americans of all tribes, including spouses of Potawatomi and CPN employees.

As Chairman Barrett commented in a April 2014 Hownikan article about Butcher’s work, “Rhonda had worked as a consultant for the Absentee-Shawnee, and I had asked her thoughts on our operations as we entered negotiations with the BIA and IHS. After meeting with her, I knew we couldn’t pass up the opportunity to bring someone as skilled and knowledgeable as Rhonda on board. Looking solely at our CPN Health Services as they are today is a pretty good indicator that we made the right decision.”

The National Indian Health Board represents tribal governments who operate their own health care delivery systems and those receiving care directly from Indian Health Service by providing a variety of services to tribes, health and federal agencies and private foundations. It monitors federal regulations, consults and promotes Indian health care issues at the national level.

Read more about Rhonda Butcher’s career serving others in the healthcare sector here.