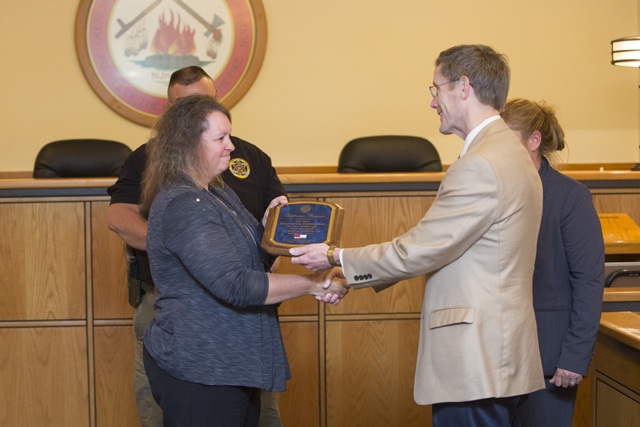 The below article originally ran in the August 25, 2015 edition of the Shawnee News-Star. It has been reproduced here with their express written permission.

It was an emotional weekend for two mothers — the mom of an in- fant found not breathing and the dispatcher who had a calming voice on the other end of a 911 call while CPR was performed to save the baby’s life.

“It was humbling to hold that baby,” said Stephanie Brewer, a Pottawatomie County dispatcher who met that baby over the weekend.

Cheryl Stowe and her daughter, Elizabeth, who turns 2 months old today, met Brewer at the 911 center, where happy tears were shed.

Earlier this month, a normal afternoon nap turned scary when Stowe checked on Elizabeth in her bassinet and found she wasn’t breathing — her lips and fingers were turning
blue.

“I started chest compressions and called 911…I was freaking out,” Stowe said.

On the other end of that 911 call was Brewer, who answers many 911 calls on a given shift.

“It was like any other day — you don’t know what you’re going to get,” Brewer said, adding this time it was a scared mother on the other end of that call. “She was crying as soon as I answered,” Brewer said, as the mother called for help because her baby wasn’t breathing.

Brewer, an emergency medical dispatcher, began protocols to talk the mother through CPR while an ambulance was on its way to the call in a rural area of Tecumseh.

Stowe, who said she knows CPR, began chest compressions, but in all the worry, she said she wasn’t sure if she was doing it right. She was home with the baby alone and found  soothing help in Brewer’s voice.

“She helped calmed me down,” Stowe said.

After two breaths and what felt like hours, Stowe said, Elizabeth finally started breathing on her own. Brewer could hear both of them crying.

“It was a relief cry for her,” she said.

For Brewer, a mother of three boys, it was a joyous sound. Elizabeth was taken to OU Medical Center for a series of tests. Three weeks later, Stowe, who said Elizabeth is doing well, said doctors have no explanation for what happened. Elizabeth is wearing a heart monitor for a couple more weeks.

During Saturday’s meeting, the two moms — who now know each other through that 911 experience — shared a hug.

“It was awesome getting to meet the person who helped us through,” Stowe said. Brewer said she is thankful for her EMD training, which allowed her to instruct the mom with step-by-step instruction to help save Elizabeth’s life.

“It was God’s will…he just used us to make sure,” Brewer said. For Brewer, it was nice to see the happy outcome. “A lot of times we don’t know what happened — we’re just the voice on the other end,” she said.