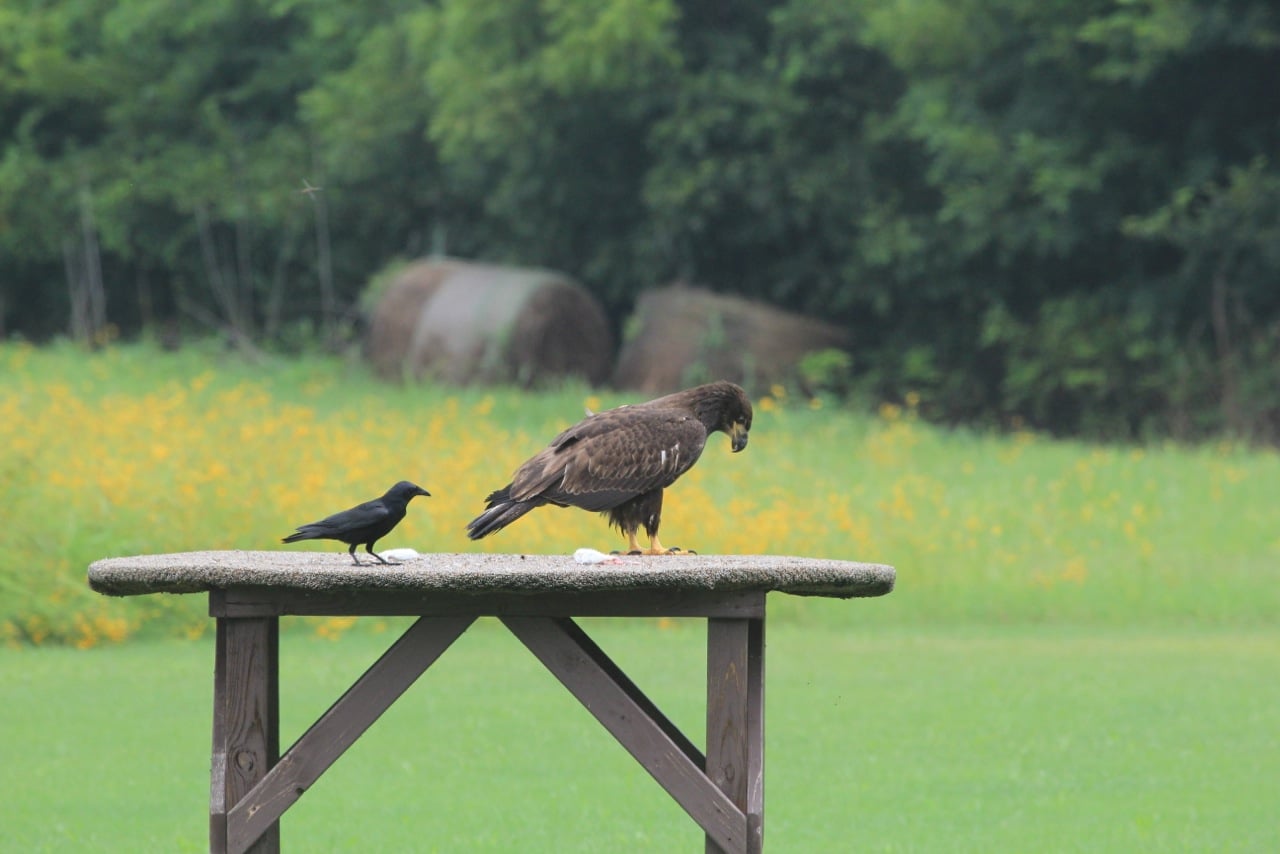 January 23, 2015 was the last positive sighting of Wadasé Zhabwé at the aviary. However that’s not to say she hasn’t been in the area. On several occasions she has roosted overnight in an old, favorite spot of hers where Squirrel Creek meets the North Canadian River just north of the aviary. She has even flown over the aviary half a dozen times, but we did not see her. After studying the telemetry it is easy to understand why, because she was flying 2,000 feet in the air or higher when she passed over.

Wadasé had returned to the Salt Fork of the Arkansas River just south of Ponca City, just as she did this time last year. She didn’t stay long though, with the weather possibly being a contributing factor.

Since the opening of the aviary in 2012, the surrounding landscape has never been so lush and green, we have the extraordinary rainfall this spring to thank for that bounty. This May we received as much rain in a month as we should for an entire year. Three times this year we have seen the aviary surrounded by flood waters. While many people in Oklahoma and surrounding states had devastating damage, we were fortunate and did not take on water in any of the buildings or enclosures, although it was closer than we would have liked. During that flooding, we felt positive we would see Wadasé return to the aviary for food as a result of the overflowing rivers and creeks. She made her way back from the Salt Fork to an area along the North Canadian River just south of Lake Arcadia near Spencer, Oklahoma just 30 miles from the aviary. But each flood came and went without a sighting. Anxiously checking telemetry as soon as it became available we learned she was hunting in the flooded fields adjacent the river. From the last storm of this winter season to the worst flooding she’s experienced since her release, she continues to meet each challenge with no more support than our prayers. After this year’s molt we suspect she will have a mostly white head and tail and her beak should have changed from dark brown to yellow along with her eyes. She is nearly mature, as a sub-adult, over the next two years she will continue to learn the best places to hunt and hone her skills. By fall next year she could be looking for a potential mate.

We are in “double bonus time” with her telemetry. Initially, we were told any data we received from the GPS backpack after a year was considered a bonus and now we are headed into year three with consistent telemetry. We can only hope the cotton stitching on the thin backpack straps lasts as long as the GPS unit itself. “Quadruple bonus time” would hopefully take us into her first nesting season. But for now we continue to check telemetry and note patterns as they emerge each season.

Knowing Wadasé is in the vicinity we continue to keep an eye out for her on the property. One early  morning, just after sunrise, watering the plants out in front of the aviary, we were startled as we looked up to find a large juvenile bald eagle perched on the upright posts of the small enclosure. We had almost walked right underneath her. How long had she been sitting there watching us?

The first thing we thought was that it was Wadasé. But this bald eagle was dark, much like Wadasé was when she first arrived at the aviary. Quickly and as calmly as we could, we made our way to the aviary office to peek out the window of the small enclosure but she was gone.

However, she hadn’t gone far; we spotted her on Wadasé’s favorite perch out front. Once we were able to get a better look at her we were positive that she is a fledgling from this year’s nesting eagles,  probably little more than five months old. After some discussion and time spent observing her we agreed that we should offer her food on Wadasé’s platform. We wanted to assess her hunting ability and be sure that she was not struggling to find food and that she wasn’t injured.

Once we had placed food on the platform it wasn’t long before she made a flyby to see what was on the platform. She was wary, but curious. After several flybys she landed. She ate on the platform and never tried to carry food away. She hasn’t yet mastered taking food in flight or even carrying her catch back to a high perch to eat. Many of her actions are reminiscent of Wadasé’s behavior when she was first released. Like Wadasé she seemed to find comfort in the surroundings of the aviary pasture, here with the other eagles shefelt at ease. After eating she even hopped down and walked over to an area still full of water from the previous day’s rain and bathed. She spent several hours perched on both enclosures  and like Wadasé, she seemed to be happy when she could land and get the other eagles to vocalize in response to her antics.

The rest of the day she stayed close, perched in one of the big pecan trees on the property. The second morning she returned just as she had the first day. The third morning she had brought company. It  appeared to be a nest mate, a smaller male, who was much more wary of our presence around the aviary. He never came to the platform to eat and we never spotted him after midday. Several times throughout the day she would leave the big pecan and take several long flights around the aviary and follow the creek to the river and return. She continued this for a week and this morning as we finish up this article, we have yet to see her. Seeing her was not only a great reminder of how fortunate we were to spend time with Wadasé after her release but how thankful we are for Wadasé’s telemetry. Today we only know the young eagle wasn’t here at sunrise. We hope that she only needed the support of a few meals and continues to thrive, as Wadasé has, on her own. We were taught that guests should always feel welcome and company should never leave hungry. Hopefully we got that right.

Send your encounters with Wadasé or any other eagles in Oklahoma or wherever you may be to Jennifer.randell@potawatomi.org. For more information or to read previous updates please visit www.potawatomi.org and search the site for Wadase or visit https://www.potawatomi.org/about-wadase.