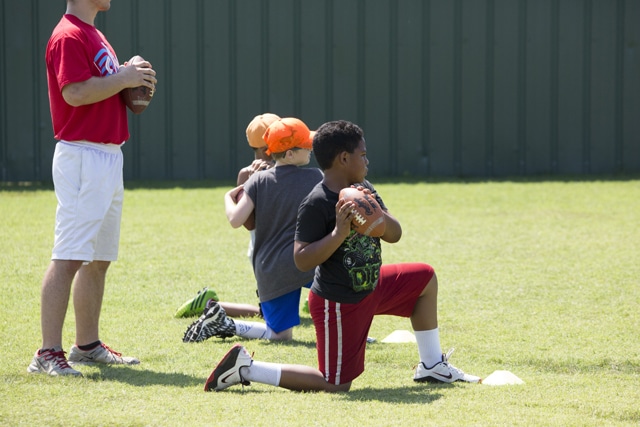 Marking a decade of partnership with Citizen Potawatomi Nation, the Day of Champions Football Camp expanded its offerings this year to include a wider range of participants. For the first time, a dual-sport camp was held with  football instruction for boys and softball instruction for girls.

“The camp was a huge success this year,” commented Sarah Lawerance, CPN Fitness Instructor and coordinator of the camps. “We had 150 campers ranging in age from 5-13, with 75 percent of those being Native American.”

The camp was hosted by Citizen Potawatomi Nation and Day of Champions Inc., which was founded by former collegiate football coach Ken Heupel and son, Josh, the 2000 national champion from the University of Oklahoma and current offensive coordinator at Utah State University.

Last year around 90 campers participated, and with each year the numbers continue to grow. The first day of camp consists of drills, instruction and small games led by collegiate and professional coaches. On day two, campers are allowed to bring a parent or guardian to participate with them in the day’s drills. Sixty adults participated this year, including 10 members of the 2015 Potawatomi Leadership Program class.

Another facet of the #14 Foundation partnership with CPN is the annual golf tournament at FireLake Golf Course. According to Lawerance, the tournament is the only fundraiser the foundation undertakes specific to leadership development. 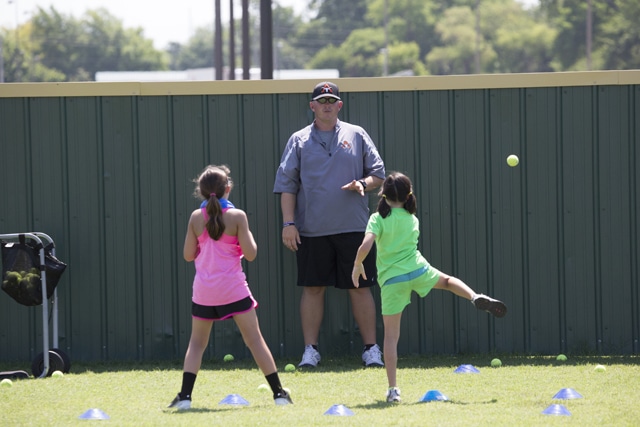 “It’s vital to the work that is done in meeting the needs of the children the foundation serves,” explained Lawerance.

The funds raised from the tournament help pay for scholarships for children to attend camps focused on academic improvement, including math and science camps and academic year tutoring.

“We hold the tournament at FireLake Golf Course because of the great relationship between the foundation
and the Citizen Potawatomi Nation,” said Lawerance. “Josh Heupel’s 14 Foundation and CPN have a shared vision of serving the needs of Oklahoma’s youth.”

Each year a celebrity golfer plays a hole with each of the 38 teams signed up for the tournament this year. This year two celebrities graced the tournament. University of Oklahoma alum and current fullback for the San Francisco 49ers Trey Millard took to the links, while former LPGA tour member Anya Alvarez took part in the tournament with Team Joe Dorman.